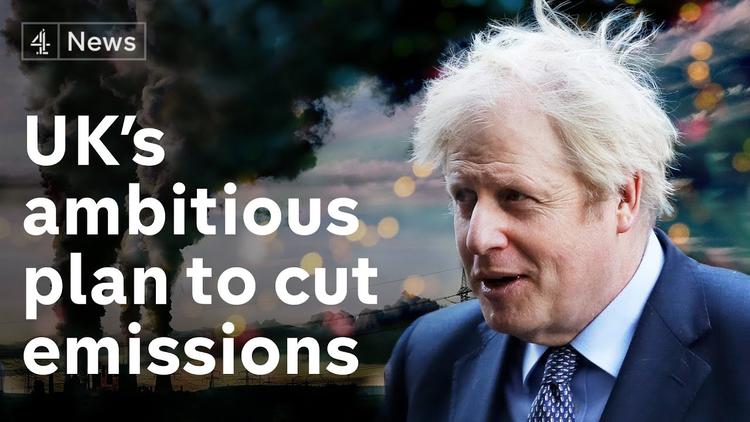 For those conscious of the growing climate crisis and the perilous economic situation, the path out of the coronavirus recession looks like a tightrope. On one side, the urgent need to revive the economy and head off unemployment. On the other, the demand that post-COVID growth is green and sustainable. The UK’s recently announced national infrastructure strategy is part of the government’s vision for managing that balancing act.

The government has set out plans to renew the UK’s “creaking national anatomy” with “hundreds of billions of pounds” of private and public investment in transport, the energy sector and telecommunications. But with the newly announced target to cut carbon emissions by at least 68% of what they were in 1990 by the end of 2030, decarbonisation measures must be much more aggressive.

If planned carefully, there are opportunities for targeting this promised infrastructure spending in a way that could slash emissions and make the British economy more sustainable.

The European Investment Bank (EIB) provided €165 billion to UK projects between 1973 and 2017. Since it lent around a third of the total project cost on average, it meant around €20 billion in project support annually in the years before the 2016 Brexit referendum. A national infrastructure bank would need to match and surpass the level of support the EIB provided post-Brexit, particularly given the dire need for a post-pandemic economic revival.

From its outset, the bank should mandate that projects which are carbon-neutral or contribute to lowering emissions elsewhere – such as energy efficient upgrades of existing infrastructure or new low-carbon public transport – get priority in funding. Continued support should require proof that promised benefits to the environment and communities are being delivered.

The government is also committing £4 billion to a “levelling-up fund”. This is supposed to reduce regional inequality across the UK by offering local authorities the chance to bid for up to £20 million in project funding.

A green growth board, or similar proposal, could recommend local projects for funding. But this should be an opportunity to find the best ideas – not an additional process for applicants to negotiate.

The government recently revised its investment rules to ensure that project appraisals go beyond benefit-cost ratios and consider how each project might serve strategic priorities, such as regional renewal or reaching net-zero carbon emissions. Allowing communities to define local priorities, lead projects and have a say in where funding goes could generate local support for new green infrastructure.

The government aims to build 300,000 new homes each year. These should all meet the highest energy efficiency standards, with the highest quality insulation and heat pumps where possible. There should be a similarly ambitious programme of refurbishment for existing homes that includes replacing gas heating systems and retrofitting walls and windows.

The UK’s private rental sector tends to have lower housing standards, so properties that fail to meet energy efficiency targets must be retrofitted before being placed on the market. Meanwhile, incentives like tax benefits or subsidies could encourage the wider adoption of energy-efficient measures.

The announcement of £27 billion for road building doesn’t inspire a lot of confidence in the government’s ability to meet its net-zero target. But there is an opportunity here to make Britain’s road network greener if the money is spent carefully.

New road building projects could focus on reducing journey times and congestion by identifying where routes are likely to be most useful, analysing hourly traffic data and adopting smart interventions to reduce queuing at roundabouts. Remote rural areas should get new road connections including new bus routes and public transport provision to reduce how dependent people in these communities are on cars.

Rapid charging hubs for electric vehicles should feature in all new motorway and A-road service stations. New roads and extensions of existing ones should include bus and bike lanes, with money for bike-sharing schemes too.

Highways England’s promise to create native wildflower meadows along the verges of all new major roads – and eventually extend them to existing roads – highlights the opportunities to make the network more wildlife-friendly as well.

Most energy-intensive industries such as electricity generation, steel manufacturing and aviation currently receive some free and tradeable allowances, each of which permits the emission of one tonne of CO₂ under the EU Emissions Trading System (ETS). A “cap”, or limit, is set on the total greenhouse gas emissions by all participants, which is lowered over time to ensure total emissions fall.

Participating companies either take measures to reduce their emissions or buy additional tradeable allowances from other companies or through state auctions. Post-Brexit, the UK will adopt a replacement carbon pricing system.

Here lies an opportunity to go deeper and further than current EU plans, by reducing the cap aggressively and bringing more polluting activities under the cap. This will ensure the cap remains below what the UK’s share would have been in the EU’s ETS, but also help the UK become a global leader in the race to reach net-zero emissions.