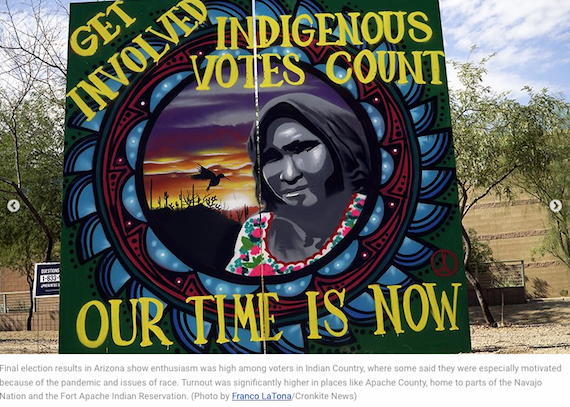 By Anthony J. Wallace ( Cronkite News) – PHOENIX – Enthusiasm across Arizona was higher this election than in the 2016 presidential contest, and final results show the contrast was even more stark in Indian Country, where voters said they were especially motivated because of the COVID-19 pandemic and issues of race.

A census analysis of 2018 data found American Indians were at least 4.4% of eligible voters in Arizona, or more than 220,000 people. Considering the neck-and-neck battle in Arizona’s presidential election this year – decided by a mere 10,457 votes – they had the power to swing the outcome.

“Knowing the thin margins in the last couple of elections, this was a year that we knew that a vote really mattered, and we took it seriously,” said Kevin Allis, CEO of the National Congress of American Indians. “(Native voters) likely played a very key role in close races in Arizona.”

Mirroring a trend across the U.S., voter turnout was higher in all 15 Arizona counties compared with the 2016 general election. Statewide, turnout increased 5.7% from 2016, to 79.9%.

The largest jump came in Apache County, which contains swaths of the Navajo Nation and the Fort Apache Indian Reservation and has a 73% Native population. Turnout there rose 10 percentage points, from 59% in 2016 to 69% this year.

President-elect Joe Biden received more than 66% of the votes there, according to county canvassing data. That’s 5 points better than how Democratic nominee Hillary Clinton finished in the county in 2016.

For example this year, 86% of voters in the Canyon de Chelly precinct on the Navajo Nation voted for Biden, compared with 82% for Clinton in 2016. But more significantly, the precinct had a 61% voter turnout this year, compared with 48% in 2016, according to official county results.

This phenomenon was not confined to the Four Corners region. From the Navajo Nation to the Tohono O’odham Nation along the Mexican border, Native voters said they felt more inspired to participate in this year’s election.

Faith Ramon, 37, a Tohono O’odham who lives in Tucson, said she was spurred by Trump’s construction of a wall along Arizona’s southern border, plowing through land considered sacred to the tribe. If completed, the wall would separate Arizona tribal members from cultural sites and Tohono O’odham who live in Mexico.

Before the election, protesters from the tribe clashed with Border Patrol agents north of the Lukeville international crossing, near where the wall is being built. On Indigenous Peoples’ Day, Oct. 12, the demonstrations escalated, and multiple protesters were arrested and sprayed with tear gas.

“They don’t understand how much it means to us,” Ramon said. “So for me, I feel like this wall really brought awareness to our nation, to our people and surrounding tribes in the area.”

Ramon works as a community organizer for the advocacy group Living United for Change in Arizona, known as LUCHA. In previous elections, the Tohono O’odham have had low voter turnout, she said, but enthusiasm was higher this year.

“It feels good to be able to have made a difference in this election,” she said.

Cronkite News analyzed individual voting precincts across the Tohono O’odham Nation and found that in both 2016 and 2020, about 94% of voters supported the Democratic presidential candidate. But this year, Biden received 21% more votes than Clinton did in 2016.

Overall turnout in Pima County, which includes the reservation, was 82% this year versus 78% in 2016.

Native voters also made their presence felt in other parts of the country. Thanks to victories in New Mexico, Kansas, Oklahoma and Hawaii, six Native Americans were elected to the U.S. House. That’s a record, according to Indian Country Today. 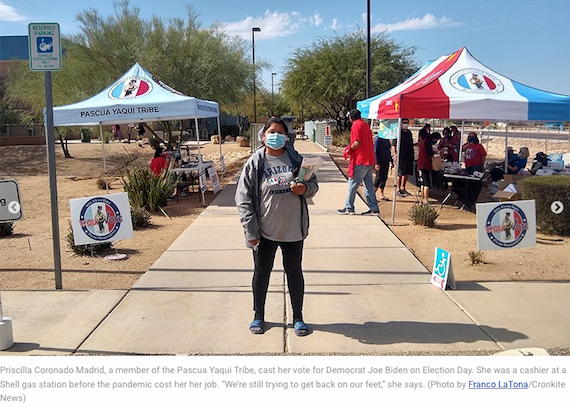 COVID-19 death rates are higher for Indigenous people and other people of color, both in Arizona and the U.S. The Navajo Nation alone has lost more than 660 people to the disease; its death rate has been higher than any U.S. state.

Franklin Sage, director of the Diné Policy Institute in Tsaile, said Trump’s downplaying of the virus didn’t sit well on the reservation. He has voted for both Republicans and Democrats but this year went with Democrats up and down the ticket, and the two biggest issues driving his decision were the pandemic and racism.

“It’s almost like going back to the ’60s when the civil rights movement really started, with the racism being blatantly open,” Sage said, adding that this sentiment is clearly “encouraged by this president.”

Priscilla Coronado Madrid, 47, a member of the Pascua Yaqui Tribe, was a cashier at a Shell gas station before the pandemic cost her her job. The mother of three said she voted for Biden “because I feel that he will make an effort to figure out something about this COVID – financially, emotionally.”

“We’re still trying to get back on our feet,” she said.

Christina Morris, a Navajo living in Farmington, New Mexico, said she considers herself to be center-right when it comes to politics – which isn’t an easy thing these days.

“I feel like it’s not just right or left. Today’s climate is either you’re far right or you’re far left,” she said. “There’s no middle ground.”

She said “leadership and racism” were the reasons she chose Biden.

Navajo Nation President Jonathan Nez said he believes Native voters made all the difference this election. In a recent interview with Arizona PBS, he noted that COVID-19 relief drives across the reservation had doubled as voter registration drives and helped increase interest.

“And I think because of the Navajo vote, we actually helped change Arizona from red to a blue state,” he said.

Now, he hopes the new administration makes good on promises to give Native Americans a seat at the table. Already, Biden has added a Navajo to his COVID-19 advisory board: Dr. Jill Jim, executive director of the Navajo Nation Department of Health.

During the campaign, Biden released his ideas for Indian Country, emphasizing education funding for tribal schools, Native American voting rights, and addressing health disparities. But Sage noted it’s easy to say the right things when you’re trying to get votes.

“I think a lot of politicians only come around the reservation during the election,” Sage said. “And the rest of the time, I think some of the Navajos think that they are being forgotten.”

Anthony Wallace is an Arizona native who expects to graduate in December 2020 with a master’s degree in journalism. His work has appeared in Phoenix New Times, Phoenix Magazine and the New Humanitarian.

Franco LaTona is a Wisconsin native who expects to graduate in December 2020 with a master’s degree in mass communication. He is honing his visual storytelling skills and writing for the health desk at Cronkite News. LaTona spent more than three years as a Peace Corps volunteer in West Africa.