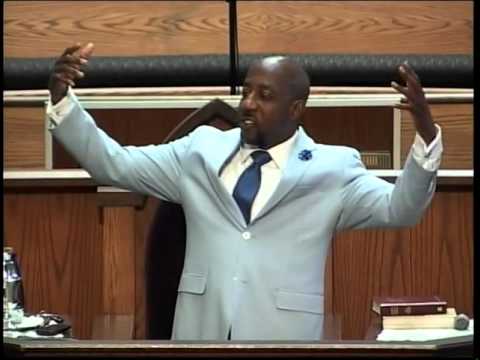 The Rev. Raphael Warnock, the new senator from Georgia, grew up in Savannah. His commitment to the Black Baptist tradition was deepened during his undergraduate years at Morehouse College. He told Vicky Eckenrode of the Savannah Morning News on 24 Oct 2005 of Morehouse, “It has deep Baptist roots so I became very interested in the long tradition of pastors who’d come through there, particularly those who were involved in the civil rights movement. It was the social gospel preachers that I found most attractive.”

He went north to study, at Union Theological Seminary (which is connected to Columbia University), where he earned a doctorate, and he preached at a church in Baltimore before returning south in 2005. That year, became a senior pastor of Ebenezer Baptist Church, the church at which the Rev. Martin Luther King, Jr. preached and which he had made a base for the Civil Rights Movement.

Mayor Keisha Lance Bottoms endorsed Stacey Abrams for governor in 2018 at Ebenezer Baptist Church, and although Abrams narrowly lost, she has been a hurricane of activity in getting out the Black vote for the past two years. Sen. Warnock’s victory would have been impossible without her, and she may have made VP-elect Kamala Harris the tie-breaker for the senate. But also Warnock’s victory would have likely been impossible without his church base.

The church’s website gives the history of its founding:

“Ebenezer was founded in 1886, nine years after reconstruction ended. A band of thirteen faithful people united under the leadership of the Rev. John A. Parker. Rev. Parker served as Ebenezer’s first pastor at the original site on Airline Street from 1886 to 1894.”

Rev. Parker, it must be noted, had been born a slave, and he began leading the small congregation in the Reconstruction Era before Southern white elites figured out ways of disenfranchising African-Americans under America’s own Apartheid, Jim Crow. This church was the headquarters for the overturning of Jim Crow legislation that ensured African-Americans had no political influence. Now, it has thrown up a credible senatorial candidate in an era where African-Americans increasingly hold significant public office. The history of the Ebenezer Baptist Church thus traverses the highs and lows of American democracy.

The name “Ebenezer” is consequential. It comes from the Book of Samuel, which speaks of the Philistines stealing the Ark of the Covenant. After 20 years, Samuel led the children of Israel to get it back, helped by the voice of God. Samuel set up a stone that he called in Hebrew Eben ha-Ezer , the Stone of Help.

The Ark of the Covenant was a gilded wooden container for the tablets of the Law brought down from Sinai by Moses.

I wonder if Rev. Parker, who had been enslaved and reduced to property by a white man before gaining his freedom with the Emancipation Proclamation, thought that during the era of slavery, the United States had lost the rule of law and the Bill of Rights to the pro-slavery faction, just as the Israelites had lost the Tablets of the Law to the Philistines. Emancipation would then have been analogous to the children of Israel recovering the Ark of the Covenant. Hence, the Ebenezer Baptist Church, a monument to the help received from God.

“Today, Ebenezer Baptist, with a congregation of over 6,000, continues to serve the Atlanta community in the Martin Luther King Jr. National Historic Site under the dynamic leadership of Reverend Dr. Raphael G. Warnock -– assuming the role of senior pastor in 2005. Dr. Warnock is only the fifth minister to lead the Ebenezer congregation in its 131 year history. One of his foremost accomplishments to date has been the completion of the Martin Luther King Sr. Community Resource Complex. This facility houses the Ebenezer Collaborative which provides support to the Atlanta community at large.”

Martin Luther King, Jr. joined the Ebenezer Baptist Church in 1936 at age 7. The Rev. King’s father became the pastor of the church.

In November, 1959, the church invited MLK to become co-pastor with his father, and he began early in 1960.

Dr. King preached a sermon on the kinds of love in 1962, taking off from the Greek distinctions among utilitarian love, romantic love, love among close friends, mother’s love and the ultimate, selfless love (agape).

Of utilitarian love he said,

“I talked with a white man in Albany, Georgia, the other day, and when we got down in the conversation he said, “The thing that worries me so much about this movement here is that it’s creating so much tension, and we’d had such peaceful and harmonious race relations.” And then he went on to say, “I used to love the Negro, but I don’t have the kind of love for them that I used to have. You know, used to give money to Negro churches. And even the man who worked for me, I would give him something every year extra; I’d give him a suit. But I just don’t feel that way now. I don’t love Negroes like I used to.” And I said to myself, “You never did love Negroes (That’s right) because your love was a conditional love. It was conditioned upon the Negro staying in his place, and the minute he stood up as a man and as somebody, you didn’t love him anymore because your love was a utilitarian love that grew up from the dark days of slavery and then almost a hundred years of segregation.” This is what the system has done, you see. (Yes) It makes for the crudest level of love. Utilitarian love is the lowest level of love.”

Of selfless love, he said:

Embed from Getty Images
“Ebenezer Baptist Church Renovation. The neon sign outside the renovated Ebenezer Baptist Church is relit January 19, 2002 in Atlanta, Georgia. The church in which slain civil rights leader Dr. Martin Luther King Jr. was a pastor was opened to the public for the 2002 King Holiday Weekend. The building and it’s facilities are undergoing a $1.8 million renovation to bring it back to it’s 1960s appearance. (Photo by Erik S. Lesser/Getty Images).”

The Rev. Warnock has been profoundly aware of the mantle he assumed. In this ugly political season, it has been a parlor game of Kelly Loeffler and Faux Cable News to take sentences from his sermons out of context to try to smear him. They clearly failed, and, indeed, attacks on the Black church may have majorly backfired.

Here is an excerpt from a talk Warnock gave at the Aspen Institute, which gives a clear idea of his values. America needs him.

“Dr. King was drawn to Memphis, and I think it’s important to lift up that the movement had been fledgling and struggling in Memphis, a local movement amongst some sanitation workers, but then one day during a rainstorm, two sanitation workers, Echol Cole and Robert Walker, were literally crushed. Their bodies were literally crushed in the back of their sanitation trucks. This is 1968. It’s because they were forced to ride the back of the truck. They couldn’t seek shelter like their white colleagues, and so they sought shelter from the natural rain, but there was no security from the unnatural disaster of Jim Crow segregation a few years after the civil rights law had already been passed.

And so Dr. King made his way to Memphis. And in the midst of that struggle emerged those iconic signs that we began to see again this year – very simple but sublime words – I am a man. Think about that – I am a man. Part of what it means to be a marginalized other, an oppressed person is that you have to have movements. You have to have a campaign to declare about yourself what ought to be obvious. So oppressed people have to have campaigns and say, I am a man. I think of Sojourner Truth in the 19th century, standing up and speaking for women’s rights and the rights of people of color and saying to her, white feminist colleagues, “ain’t I a woman.” And now of late, our younger sisters and brothers are saying, black lives matter. And when people respond to say, all lives matter, it’s obvious that they’ve missed the point.