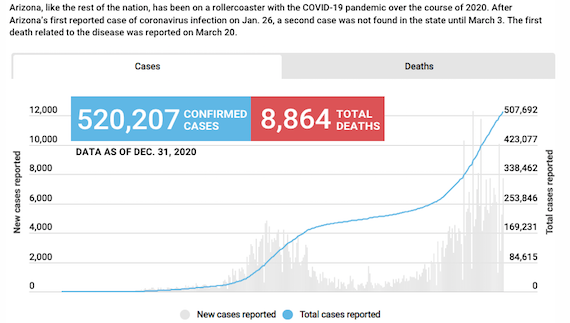 ( Cronkite News ) – WASHINGTON – The numbers can be numbing. And that’s exactly what health officials fear.

More than a half-million Arizonans have contracted COVID-19 and more than 8,700 have died from it so far, according to state data. The disease is surging again, with one week this month seeing an average of 7,770 new cases a day, soaring past the previous high set in July of a seven-day average of 3,482 new cases.

Hospital capacity is being stretched to the breaking point, with COVID-19 patients taking up a record 61% of beds in the state’s intensive care units as of Tuesday, and health care workers struggling under the strain.

But news of the disease, while prominent, does not command the headlines or the attention it did just months ago.

“The phenomenon some call COVID fatigue is real, and it’s dangerous,” said Dr. Cara Christ, director of the Arizona Department of Health Services, in a late-November video update.

It’s also not surprising, said Stephen Benning, associate professor of psychology at University of Nevada Las Vegas, who said repeated exposure to something, such as an event, can reach a point where it no longer elicits the same response it once did.

“We’ve become kind of numb to the daily horrors of the increasing case counts, death toll, other kinds of things, and have kind of adapted to that,” Benning said

“We’ve become kind of numb to the daily horrors of the increasing case counts, death toll, other kinds of things, and have kind of adapted to that.”

And the increases are everywhere. A winter surge in cases is being seen around the globe, and the pandemic in the U.S. has shifted from isolated hotspots, like Arizona this summer, to a problem being felt nationwide.

As of Tuesday, the Centers for Disease Control and Prevention reported a total of

“At this point, death becomes baked into our expectation of what will happen with this virus,” Benning said. “Whereas before, many people believed it wasn’t any worse than the flu.”

He said that COVID fatigue can lead to less caution, which in turn could result in “twice, three times as many deaths as we could have had.”

“We risk making this a much deadlier virus, by letting it spread unchecked through the community,” Benning said.

That complacency is troubling to Arizona health experts. A state health department spokesperson said in an email this month that pandemic fatigue “is an area of concern as it may cause individuals to let down their guard.”

But Christ and others warn that now is the time to stay alert.

“To protect everyone, we have to stay committed to our prevention efforts, even as a vaccine becomes a reality,” Christ said. “The numbers tell the story, COVID-19 remains active in our communities.”

COVID-19 in Arizona is still “a real issue and the data is very disturbing,” said Dr. Daniel Derksen, director for the Arizona Center for Rural Health, pointing to the rising demand for hospital beds across the state.

The state reported that 61% of hospital ICU beds were occupied by 1,076 COVID-19 patients Tuesday, with another 29% of beds used by non-COVID patients, leaving just 178 ICU beds available in Arizona hospitals. The stress is particularly strong in rural areas, Derksen said.

“Certain counties are at much higher rates of infection and also death rates per 100,000,” he said. “There are four counties that are particularly concerning because they’re three to four times the death rate per 100,000 as Arizona overall or compared to more urban counties.”

The death rate is also surging again, both nationally and in Arizona, with numbers again approaching the death toll from the summer, when health care workers did not know as much about how to treat the disease.

As COVID-19 deaths continue to rise, Benning says conceptualizing the toll across the nation is harder to do than it was during early, concentrated outbreaks.

“Early on in the pandemic, there was much more horror at particular death tolls when it was concentrated in New York or in Northern Italy, than when it’s diffused and spread across the entire country,” he said.

But the disease does not seem to be drawing as much attention now, even though Benning said that globally, “We are now losing more people, or have lost more people, in one day than even in the worst days of the early pandemic.”

As those numbers have gone up, the number of briefings held by elected officials has gone down, with daily news conferences at the White House and in hard-hit states like New York reduced to occasional meetings now.

That is also true in Arizona, where Gov. Doug Ducey held weekly COVID-related events from April 29 to Aug. 31, when the briefings shifted to once a month. Christ continues to post weekly videos of updates on the health department’s YouTube channel, but typically holds news conferences in partnership with Ducey.

Will Humble, director of the Arizona Public Health Association, and a former director of AZDHS, said he could not understand why the shift in communication occurred – especially in what statistically is becoming the worst months of the pandemic for the state.

While the statistics look grim now, Humble believes there is still time for a wake-up call. He said he expects a stronger reaction from the public once hospitals start to reach capacity around the state.

“It is very similar to where we were in, say, June 15,” Humble said. “People were not freaking out yet – a month later, in July, people were freaking out because hospitals were over capacity. It became a lot more real in July.

“Basically, the hospital crisis hasn’t hit its apex yet. It will in the next few weeks,” he said.

Benning said there are ways to fight COVID fatigue and ways for people to keep pushing for safety. He recommends that people create a pros and cons list when considering socializing, get creative to avoid complete isolation and remind themselves of their moral values.

“It may also be helpful for people to step back and consider what their fundamental values are,” he said. “If they really value prioritizing the safety of other people, it may be helpful for them to remind themselves that it’s something that they really hold dear.”

Joycelyn Cabrera is an Arizona native who expects to graduate in May 2022 with a bachelor’s degree in journalism and mass communication and a minor in digital audiences. She is a digital reporter and producer at Cronkite News in Washington, D.C., and has reported for a nonprofit organization and local news outlets in Arizona.