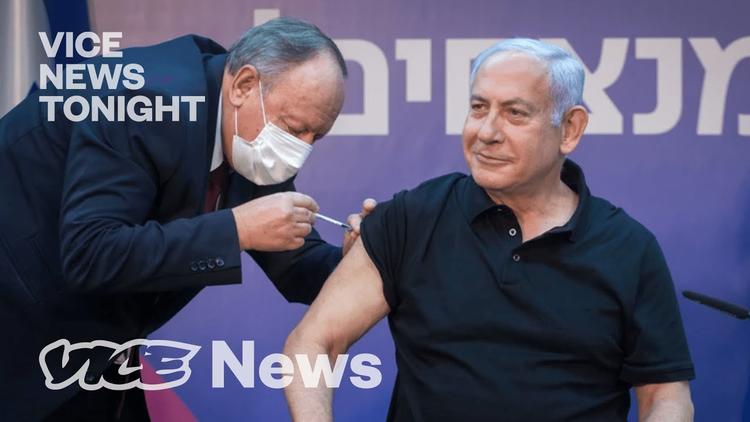 Editors note: This post was written by Pam Bailey, founder and executive director of We Are Not Numbers, a platform that carries the voices of Palestinians under Israeli occupation, through empowering and mentoring young, local journalists.

( Globalvoices.org ) – Protests are growing as Israel becomes the country with the highest per-capita COVID-19 vaccination rate,while refusing to facilitate a supply of the lifesaving treatment for the Palestinian territories it controls.

A Change.org petition calls on the Israeli government to “assume its responsibility as an occupying power under international law and stop this blatant act of racial discrimination.”

United States Representative Marie Newman, a Democratic from the state of Illinois, tweeted:

The US activist group Codepink followed with an email to its followers, asking them to demand that their representatives “condemn Israeli medical apartheid.” And now, five human rights organizations have lodged a petition with the Israeli Supreme Court challenging the refusal of the minister of internal security to vaccinate Palestinian prisoners in Israeli jails.

Yet, while not even one dose of any of the approved vaccines has made it to Palestinians in the West Bank and Gaza, Israel has vaccinated its own population faster than any country in the world, with more than a quarter of its population receiving the vaccines so far.

“The Israeli government must stop ignoring its international obligations as an occupying power and immediately act to ensure that COVID-19 vaccines are equally and fairly provided to Palestinians living under its occupation in the West Bank and the Gaza Strip,” said Amnesty International in a statement.

At least 25 members of the extended family of Asmaa Tayeh, operations manager for We Are Not Numbers, have tested positive for the virus, 15 have fallen ill and three have died.

“Ever since the reports of the virus surfaced in March 2020, we’ve been paranoid,” said Tayeh:

I was scared to death and ran to the market to fetch food so we could prepare to stay home for months. I’d yell at anyone who left the house. But since we didn’t know anyone who was infected, we started feeling a little safer. Then came November and December. More and more of our relatives were infected. On top of that was the fear that we wouldn’t get good medical care, since the Israeli occupation has crippled our health care system.

Another WANN member, Nour Yacoubi, was forced to delay her wedding when her future sister- and brother-in-law were hospitalized in the ICU with COVID-19 symptoms.

Meanwhile, WANN’s Gaza manager, Issam Adwan, fought to get his mother, who struggles with a heart condition, tested for the virus when she started showing coronavirus symptoms. Tests are in short supply, however, and she was initially refused the diagnostic. By the time she lost her taste and smell — a common virus symptom — and was granted the test, almost everyone in her family had been exposed, with many testing positive and several falling ill.

Dr. Ayman Elhalabi, Gaza’s general director of Medical Supportive Services – which is a division of the Health Ministry based in the West Bank -, confirms that COVID-19 testing is widely inaccessible, almost a year after the pandemic swept the world, due to shortages.

The central laboratory of the Ministry of Health is the only place in the Strip that can perform the COVID-19 test. … The lab ran 200 to 300 tests a day in the beginning of this crisis, but now we’re doing between 2,000 and 3,000. Still, it’s not enough. So, we have to prioritize patients by the severity of their condition. Currently, I’d estimate we have enough test kits for 20 more days.

Test shortages are particularly critical since COVID-19 infections are surging after the emergence of a new variant of the virus. Between 10 percent to 60 percent more transmissible, the mutation has been detected in 50 countries so far.

Gaza’s hospitals are in serious crisis due to the increasing cases of COVID[-19]; it’s put a lot of pressure on our capacity to deliver other medical services. Many doctors and nurses are working overtime and they are being paid just 50 percent of their salaries. These are people who need to provide for their families.

Despite the crisis, few are hopeful that Gaza will get any of the newly approved vaccines anytime soon.

The Palestinian Authority (PA), in the West Bank, accused Israel of ignoring its responsibilities to ensure vaccines are available in occupied territory, and has struggled to obtain supplies elsewhere.

The PA has said it negotiated with British drug giant AstraZeneca to receive a first shipment of COVID-19 vaccine doses in March — far later than other countries and not likely to be sufficient. Most recently, it announced that it has arranged to obtain the Russian vaccine known as Sputnik V, with the first shipment expected to arrive next month. However, its resources are limited and it is unknown how much will be allocated for Gaza, since the PA is at odds with Hamas, which governs the Gaza Strip.

In an interview with Sky News, Israeli health minister Yuli Edelstein said Palestinians “have to learn how to take care of themselves,” adding that Israel has been “helping our Palestinian neighbors from the very early stages of this crisis, including medical equipment, including medicine, including advice, including supplies.”

Gerald Rockenschaub, head of the World Health Organization’s mission to the Palestinians, told the British newspaper The Independent that it asked Israel to provide COVID-19 vaccines to at least cover Palestinian health workers. Nearly 8,000 Palestinian medics have reportedly been infected by the virus. According to The Independent’s report, the Israeli government declined, saying it must take care of its own population first.

In his Sky News interview, Minister Edelstein was quoted as saying:

I don’t think that there’s anyone in this country, whatever his or her views might be, that can imagine that I would be taking a vaccine from the Israeli citizen, and, with all the goodwill, give it to our neighbors.

“We’re hearing a lot of mixed news,” said Dr. Elhalabi. “Really, I think we are months away from receiving the vaccines. I call on the international and Arab communities to intervene before the situation gets out of control.”

As for Tayeh, she was not surprised. “The virus will get rid of a good number of Palestinians. This way, Israel won’t have to pay as much as it does in a war to kill us. Plus, we’ll be too distracted by sickness to fight back.”

Anas Mohammed Jnena conducted the interviews with the health workers.

Written byWe Are Not Numbers

VICE: “Israel Is Vaccinating ‘Everyone’ — Besides 5 Million Palestinians”