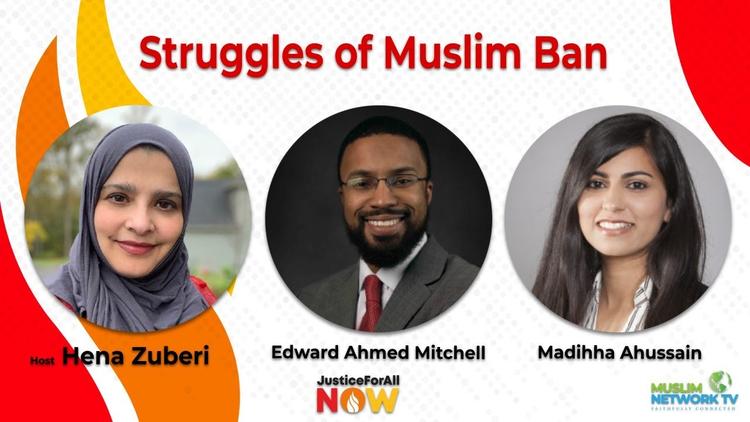 Ann Arbor (Informed Comment) – The Muslim visa ban that Trump got through on his third try, and in which the Supreme Court to its everlasting shame acquiesced, is no more. President Biden abolished it with a stroke of his pen on his first day in office.

That isn’t enough. Congress needs to legislate explicitly so that if a Trump wanna-be becomes president in 2025, he can’t just impose such a measure again. The Democrats can do this now, for about 18 months before they likely lose the House of Representatives in 2022 and should put a rush order on it.

Moreover, the Arab press is pointing out that the visa ban could nevertheless have a long arm and harm its victims even after abolition, and that the Biden administration must prevent ongoing harm. For instance, when you apply for a visa, you are asked if you were ever denied a visa before. Obviously, a previous denial could look suspicious and be grounds for being turned down now! You’ve got millions who could be affected.

Trump’s Muslim visa ban wrought enormous harm to innocent Americans. It kept grandchildren from visiting their grandparents. Some died alone and far away. It separated not only families but close friends. It separated colleagues. It broke up research teams. It ruined careers and businesses. It had no basis in fact. Immigrants from the countries singled out were not responsible for any acts of terrorism in the US. All the while, Trump was coddling the real terrorist threat, of white supremacists.

The Executive Order was clearly discriminatory and a violation of the First Amendment (see below). The Republican Supreme Court that prides itself on upholding religious liberty against Democratic Party secularism gave in to the most hateful attack on freedom of religion in decades.

It is worth reviewing what judges said about the first two attempts at a Muslim ban, which failed in the lower courts because they were so egregious. Trump won on the third try by including a few officials in Venezuela and North Korea, while mainly targeting Muslim-majority countries, and SCOTUS let Trump get by with this sleight of hand. What judges said about versions 1.0 and 2.0 of the executive order was also true of 3.0, whatever Clarence Thomas and Samuel Alito (two of the worst justices in history) might say. Thomas is inexplicably married to a white nationalist who cheered on the Capitol insurrection.

“US District Judge James Robart of Seattle, a Bush appointee, issued a judgment suspending the Executive Order on the grounds that it is unconstitutional and places an undue burden on the state of Washington and on its 25,000 residents from the 7 countries that Trump singled out…

Robart wrote, according to the Seattle Times:

He even mentioned the harm to the state’s great universities, a point I have made in the past.

Steve Bannon and Stephen Miller, the Neofascists who wrote the EO, were hoping that immigrants would be treated by the US courts as foreigners with no rights or standing.

Robart is saying that residents of a state in the US have rights that the president cannot simply erase by fiat. He is further saying that institutions of the state itself, including universities, have a right to pursue their work unmolested by discriminatory policies . . . The court also accepted the state’s argument that the EO has “inflicted upon the operations and missions of their public universities and other institutions of higher learning, as well as injury to the States’ operations, tax bases, and public funds. These harms are significant and ongoing.”

Then the fascist racists came back with a revised version of the visa ban, which was struck down by Judge Derek Watson in Honolulu. I wrote,

“It is delicious that Hawaii stepped up here, as the most ethnically diverse state in the nation, where the quarter of the population that is Japanese-Americans well remembers the internment camps to which their families were consigned during WW II. Hawaii has a lot of immigrants, and those immigrants found companies and act as entrepreneurs, adding enormous value to the Hawaii economy. 1 in 6 residents of Hawaii is foreign-born, and 20% of business revenue is generated by 16,000 new immigrant businesses. Trump’s white nationalism is completely out of place in Hawaii. And by the way, Hawaii and California, the diverse states, are the future of America. Trumpism can only slow that down, not stop it…

Judge Watson notes, “The clearest command of the Establishment Clause is that one religious denomination cannot be officially preferred over another.” Larson v. Valente, 456 U.S. 228, 244 (1982). To determine whether the Executive Order runs afoul of that command, the Court is guided by the three-part test for Establishment Clause claims set forth in Lemon v. Kurtzman, 403 U.S. 602, 612-13 (1971). According to Lemon, government action (1) must have a primary secular purpose, (2) may not have the principal effect of advancing or inhibiting religion, and (3) may not foster excessive entanglement with religion. Id. “Failure to satisfy any one of the three prongs of the Lemon test is sufficient to invalidate the challenged law or practice.” Newdow v. Rio Linda Union Sch. Dist., 597 F.3d 1007, 1076–77 (9th Cir. 2010)….

Judge Watson notes that the State of Hawaii alleged two major harms of the EO. The first is the University of Hawaii system, which is an “arm of the state.” The University, which has 55,756 students, pointed out that it “recruits students, permanent faculty, and visiting faculty from the targeted countries.” The EO harms the whole state of Hawaii “by debasing its culture and tradition of ethnic diversity and inclusion.”

The Iranian, Syrian, Libyan, Somali, Yemeni and Sudanese students who are excluded from the country “are deterred from studying or teaching at the University, now and in the future, irrevocably damaging their personal and professional lives and harming the educational institutions themselves.” …

Not only would some of these persons, and others, be dissuaded from continuing their search for knowledge in the US, “The State argues that the University will also suffer non-monetary losses, including damage to the collaborative exchange of ideas among people of different religions and national backgrounds on which the State’s educational institutions depend.” The EO is interfering not just in finances but in the very purpose of the University, which is the free exchange of ideas.

The EO also interferes with the University’s ability freely to recruit the most qualified faculty and students and with its commitment to being “one of the most diverse institutions of higher education” in the world. Moreover, the university envisages it as difficult to run its Persian Language and culture program without the ability to have visitors from Iran.

The State’s summary of the harm to the University of Hawaii includes educational and intellectual harms (and ethnic diversity is itself an intellectual advantage) as well as financial and monetary ones. In the Lockean tradition, property harms are typically the ones taken most seriously.

Hawaii’s second argument is that the EO will harm its tourism industry, a central component of its economy. The chaotic and arbitrary way the first EO was rolled out, and the uncertainties attending the second one will “depress tourism, business travel, and financial investments in Hawaii.”). Middle East visitors in the month after the first EO fell by 1/5. Tourism brings in $15 billion a year to the Hawaii economy (it is a small state of 1.5 million people).

Hawaii has a point, and Judge Watson recognized it.”

Justice for All: “Struggles of Muslim Ban”