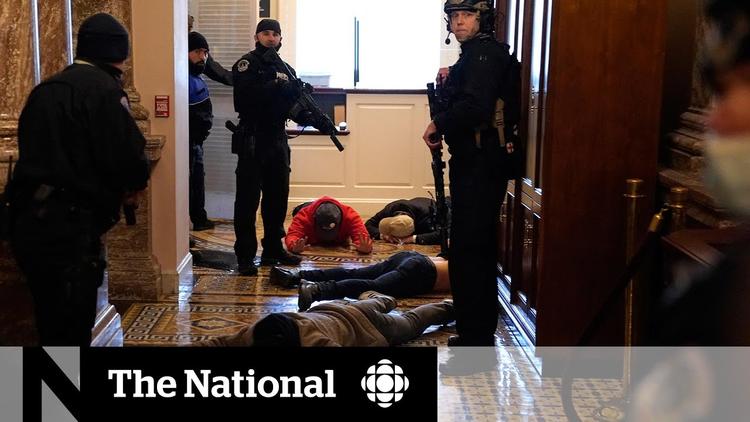 Ann Arbor (Informed Comment) – Trump whipped up far right wing conspiracy theorists and white nationalists on Wednesday, telling them the election had been stolen The implication was that it had been stolen by Black and Brown people in urban areas like Detroit and Philadelphia.

Thousands of members of Proud Bois, Boogaloo, QAnon (who believe that Democrats are Satan incarnate) and other dangerous militia-like groups gathered at the capitol, and at 2:30 pm, as Ted Cruz (R-TX) was trying to overthrow the government by talking it to death, the leaner, meaner versions of Cruz climbed walls, broke windows and invaded the Capitol for the first time since the Redcoats occupied and burned it in 1814.

One woman was shot and killed by Capitol police as she rushed a room in the Legislature. Three others died of unspecified medical emergencies.

The Senators and Congressmen cowered behind tables and then were rushed to the basement of the Capitol, where there are tunnels that lead to their offices in nearby buildings. (I’ve been in them).

Trump, having caused all this violence, came out with a video in which he asked his Black Shirts to use peaceful means. He said to the thugs and rioting mobs, their head addle with cosmic paranoia, “We Love you. You’re very special.”

He later tweeted, “These are the things and events that happen when a sacred landslide election victory is so unceremoniously & viciously stripped away.”

As a Middle East specialist, these scenes were frighteningly familiar. Parliaments have often been invaded and/or terrorized in that part of the world. In some ways, the US has often been responsible for inducing the weaknesses in government and society that have allowed these events.

In some ways the best comparison between what happened yesterday in Washington, D.C., and a Middle Eastern country is to Iraq. In 2016, hundreds of followers of the firebrand Shiite cleric Muqtada al-Sadr invaded Baghdad’s Green Zone and the parliament building itself. They sat on the chairs of the parliamentarians, just as the QAnon cultists did in the halls of Congress.

They were protesting the spoils system that had grown up under George W. Bush’s military occupation of Iraq, whereby a handful of political parties monopolized government ministries, using them as a way of handing out jobs to the party faithful. In the meantime, corruption and embezzlement of government oil funds had left the country with inadequate electricity, potable water and other services. The Sadrists in 2016 made an alliance with the Communist party.

Embed from Getty Images
Iraqi supporters of Shiite cleric Moqtada al-Sadr wave the national flag as they listen to his speech during a demonstration in Baghdad’s Tahrir Square on February 26, 2016, calling for governmental reform and elimination of corruption. / AFP / AHMAD AL-RUBAYE (Photo credit should read AHMAD AL-RUBAYE/AFP via Getty Images).

So if we wanted to know, who is Trump most like in Middle East politics, his populist streak suggests a comparison to Muqtada al-Sadr, and his white nationalist conspiracy theorists are the counterpart of al-Sadr’s millenarian Shiite fundamentalists.

Iran has a hybrid system of government, with an elected parliament and president, but an appointed theocracy over them. Iranian elections have often been procedurally aboveboard (2009 was an exception that the government later regretted). The problem is that the candidates are vetted beforehand for loyalty to the Islamic Republic’s fundamentalist ideals. Parliament does a fair job of representing constituents, and the rural population has been much better served, with electrification, road-building and schools, since the 1980s.

On Wednesday, June 7, 2017, gunmen and suicide bombers of the ISIL terrorist organization attacked the Iranian parliament. Four men with long guns stormed the complex, then when police came, one blew himself up with a bomb belt.

Although some 90 or 95 percent of Iranians are Shiite Muslims, the country has a significant Sunni minority, especially among the Baluch of the country’s southeast, the Turkmen, and the Kurds; and about half of the 5-million strong Iranian Arab community are Sunnis. Iranian authorities said that the assailants were Iranian recruited by ISIL. Since the terrorist organization is hyper-Sunni, it is likely that they recruited from one of the Sunni ethnic minorities.

ISIL had grievances against Iran because it played a major role in defeating the phony “caliphate” that announced its brutal and murderous regime as an “Islamic State” (it wasn’t, any more than The Order of the Solar Temple was a “Catholic State.” Iran planned and helped carry out the liberation of Iraq’s Tikrit from ISIL in spring of 2015, and ultimately the United States gave that effort air support. Yes, it is hard to remember now, but the US was covertly allied with Iran against ISIL.

So the attack on the Iranian parliament was an attempt to intimidate Iran into backing off, but of course it only determined Iran to finish off ISIL in its Iraqi neighbor.

After dictator Muammar Gaddafi was overthrown by a youth revolution in 2011, the country went to parliamentary elections in summer of 2012, but of course the new General National Congress in the capital of Tripoli was weak. Muslim fundamentalists had an outsized influence (most Libyans were brought up under socialism and many are secular-minded, while others just don’t like fundamentalism).

Embed from Getty Images
Judges of Libya’s supreme court discuss the legitimacy of the country’s internationally recognised parliament during a hearing on November 6, 2014 in the capital Tripoli. The court invalidated the parliament, news agency LANA reported, setting the stage for more political chaos in the violence-wracked nation. AFP PHOTO / MAHMUD TURKIA (Photo credit should read MAHMUD TURKIA/AFP via Getty Images).

On May 18, 2014, gunmen associated with former general Khalifa Hiftar assaulted the parliament as though it were a military target, with heavy arms, forcing the parliamentarians to flee. The gunmen then invaded the halls of parliament and declared it suspended.

This was the beginning of the Second Libyan Civil War, which has gone on to this day and has displaced tens of thousands of people. If Hiftar had been willing to work through elections instead of strong man tactics, he could have saved the country a lot of grief. He is based in Benghazi in the east and allegedly backed by the CIA (he lived in exile near that organization’s headquarters), as well as by Russia, France, Egypt and the United Arab Emirates. The fundamentalist government in Tripoli is supported by Turkey. Hifter made a push over the past year to try to take Tripoli and become dictator of the whole country, but he failed, and so Libya remains divided and at civil war.

So in this case Trump most resembles Khalifa Hifter, the would-be dictator.