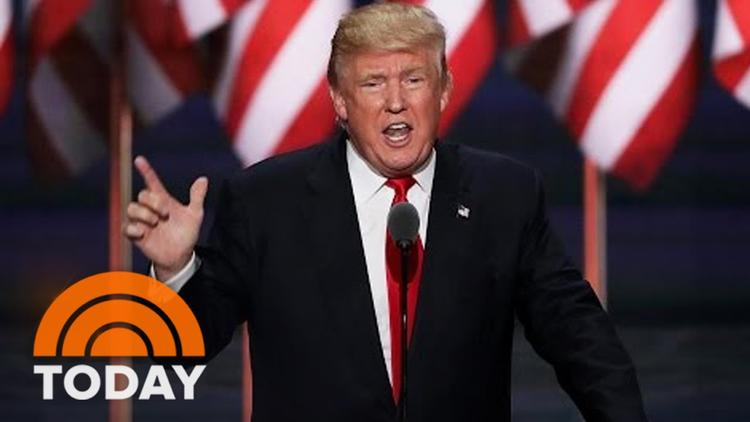 The tally was in, it was clear Donald Trump had lost – and he tweeted: “either a new election should take place or … results nullified.”

Trump was just months into his presidential campaign, and was already telling a story he would tell countless times over the following five years, hinting to the world at the character of the man the U.S. Senate will soon evaluate in the impeachment trial.

Back then, Trump was seeking to nullify Ted Cruz’s victory. And he was accusing Iowa of bungling the primary vote counting.

“The State of Iowa should disqualify Ted Cruz from the most recent election on the basis that he cheated – a total fraud!” Trump tweeted.

The Donald Trump Americans think of now was the same Donald Trump who entered the election in 2015 and the White House in 2016. Some of his power to rally a loyal base was based on his repetitive rhetorical style, but on Twitter he was especially potent as narrator-in-chief of his own political life.

In 2017, I began to collect all of his tweets, going back to June 16, 2015, the day he announced his candidacy. I kept at it until Jan. 8, 2021, the day Twitter permanently suspended his account. I wanted to learn more about how he used language. But in those 20,301 tweets I learned something more fundamental about how the 45th president of the United States used Twitter to tell his own story.

However, the main distinction I found was that Trump was among the most frequent users of storytelling methods. Since I am a digital narrative researcher, that intrigued me.

Storytelling in general is common among effective politicians, but Trump’s effort appears to have built a high level of loyalty, diverted attention away from negative topics and generally set the agenda for what the American public was discussing.

Others have looked at this aspect of Trump’s appeal, examining specific stories throughout his presidency, his style of storytelling and even the rhetorical components of his populist narrative.

But I discovered a particular story structure that he used the whole time.

There were five main themes, which appeared regularly – often all in one day:

Taken together over time, this formed an overall story structure that I summarize this way: “The establishment is stopping me from protecting you against invaders.”

The elements were flexible. “The establishment” could be anyone – Democrats, the NFL, a media outlet, a corporation and even Vice President Mike Pence. “The invaders” were China, the coronavirus that first emerged there, people crossing the U.S.-Mexico border or Black Lives Matter protesters.

But the structure never changed: There was a danger to the nation, Trump was uniquely able to protect America and he was righteously supported by “real” Americans.

That is what he said; how it worked was equally important.

In terms storytelling scholars use, Trump “rescripted” the world to fit his themes. He took elements of news articles, viral videos, other tweets and whatever else he needed to build his messages. He took storylines that were already in the public sphere and placed new meaning on them to fit his own tale.

During the 2015 lead-up to the Republican primary, for example, the conservative Club for Growth spent US$1 million running negative ads against Trump. But Trump, tweeting, rescripted the story: “The phony Club For Growth, which asked me in writing for $1,000,000 (I said no), is now wanting to do negative ads on me. Total hypocrites!” The Club for Growth was a groveling and fraudulent establishment; he was effective and powerful.

Trump would also rescript characters into multiple, sometimes contradictory, messages, depending on the day’s news. Consider his tweeting about China, which was first a partner, then a trade adversary and finally an invader:

Sticking to the script

Trump most commonly tweeted about the government, media and corporate institutions, which often became fodder for news coverage. The media often framed the tweets as attacks and “counter-punching.” But in a closer read, they were not merely responses to criticism or bad news. They regularly described something, the way a narrator would.

But his recasting of reality through his own lens may have also played a role in Trump’s downfall. All the attacks, all the twisting of information, all the fear, may have worn out just enough people in key states to ensure his defeat.

When that defeat struck, Trump’s storytelling framework did not change: It escalated and multiplied, consuming everything and everyone who did not blatantly support what many have called the Big Lie – that the election was rigged against him:

A path to the end

There is no one single line from a Trump speech or tweet that is going to be the smoking gun urging his followers to violence.

But he did help set the scene for the Capitol raid. The most famous was on Dec. 19, 2020: “Peter Navarro releases 36-page report alleging election fraud ‘more than sufficient’ to swing victory to Trump … A great report by Peter. Statistically impossible to have lost the 2020 Election. Big protest in D.C. on January 6th. Be there, will be wild!”

The way Trump crafted this tweet is representative of how he rescripted things to tell his own story. He took something already in the discussion, Navarro’s report, and used it in a way that shaped the logic for the “stop the steal” campaign.

Trump didn’t have to invent #StopTheSteal – just include it in his existing narrative structure. Other politicians, including Rep. Marjorie Taylor Greene, have adopted Trump’s general structure for their own tweets.

However, the final tweet from his account before it was closed does not really fit any of his common themes. It is also one of the few times it seems like the tweet is telling a more traditional story. “To all of those who have asked, I will not be going to the Inauguration on January 20th” is a pretty understated ending to an epic tale.

[_The Conversation’s most important election and politics headlines, in our Politics Weekly newsletter.]