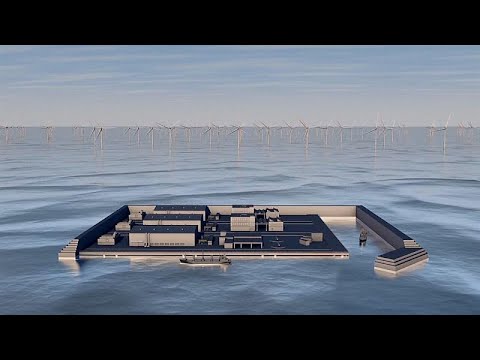 Ann Arbor (Informed Comment) – AFP reports that Denmark’s parliament has just committed to building an artificial island off its shores that will be home to hundreds of huge wind turbines. It is the largest construction project in Denmark’s history, and will be as big as 80 football fields. It will be protected on three sides by an enormous sea wall and will have a harbor to receive ships. Some of the wind energy will be stored as hydrogen, which can be liquefied and shipped like liquefied natural gas (LNG).

The project will cost $34 billion and the Danish government will own 51% of it. The rest will be owned by private companies in a public/private partnership.

Studies have demonstrated that Denmark’s success in building out wind power has been driven by government policy, not tech. Individuals cannot put wind turbines on their houses, and this technology requires government support for large scale new infrastructure.

The island will be home to at least 200 wind turbines, each 850 feet high, and will possibly have 600 turbines.

Ironically, Denmark is in part using income from its petroleum sales to fund the green energy project. Denmark has recently committed to cease deep sea oil exploration and extraction by mid-century. Don’t worry, it will stop substantially before then, since electric cars will soon take over and they don’t run on petroleum.

Denmark’s legislators have set a goal of reducing carbon dioxide emissions by 70% by 2030.

The country already has an energy hub on the island of Bornholm in the Baltic Sea, and it has another hub in the North Sea. Wind typically blows harder and for more hours a day offshore.

Offshore wind projects do not meet the same opposition as onshore ones, and the Biden administration is gearing up to promote offshore wind, which the US signally so far lacks. New York, Maryland and Virginia are all pursuing big offshore wind projects. For deeper waters, floating turbines can be used, and five are operating off Scotland.