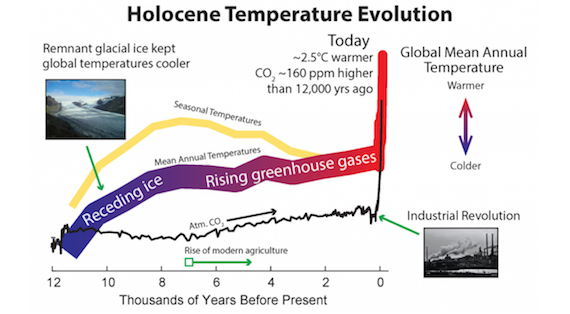 Ann Arbor (Informed Comment) – Our human civilization, with agriculture is only about 10,000 years old. It started in the Middle East in the Neolithic.

An ice age began about 3 million years ago, and we are still in it inasmuch as Antarctica is covered with ice as is the North Pole, Greenland and the Himalayas. But within the ice age, there were “glacial maximums” in which the ice covered a lot of the earth. 30,000 years ago, the Detroit area where I live was covered in 3 miles of ice. You can still see that mountain of ice today. It is called the Great Lakes, which are just its melt water.

Around 11,500 before present, the ice receded a great deal and we entered the Holocene era. The glacial maximum ended in part because the earth became a little closer to the sun (the earth’s orbit has variations over very long periods of time– it isn’t exactly regular). It is not clear whether it warmed up a bit and that released some source of carbon dioxide from the Southern Ocean (south of Australia), or whether the CO2 was released first and reinforced the effects of the sun’s closer proximity.

The Holocene has been relatively cold, and it is the era in which humans developed farming and urban life. I am a historian, and everything historians study has happened during the Holocene, these past 110 centuries. Actually, most historians are really only interested in the past 5,000 years since writing was developed.

That civilization is a cool Holocene-era development is worrisome, since humans have burned so many fossil fuels since 1750 and put so many billions of tons of carbon dioxide into the atmosphere that the whole world could become tropical. The industrial revolution did not take place first in the tropics. We don’t know how civilization will thrive in a hot world. Super-storms are hell on electricity and wifi.

Knowing what the Holocene was like is important for interpreting history. We know that during the past 5,000 years, the average temperature of the earth has been cool but gradually warming. It was gradually warming likely because of volcanic activity that put a bit more carbon dioxide into the atmosphere. Not a lot more as we are doing, but a little bit more.

So, what was the first 6,000 years of the Holocene era like?

One theory had it that there was a warm beginning to the Holocene, a “thermal maximum.” Then, these scientists posited, the earth turned cooler around the time the Middle East entered the bronze age, over 5,000 years ago.

The theory of a warm beginning holocene held that we are just now heating up the earth to the levels common say 9,000 years ago. You can imagine how happy that made the climate-change deniers, since they typically wanted to maintain that the earth’s present heating is nothing out of the ordinary for the Holocene.

As usual with the denlialists, they don’t have a leg to stand on. Now a team of Rutgers scientists has demonstrated that there was no early warm period in the Holocene:

They examined calcareous fossils (surviving shells of microorganisms that lived close to the surface of the Pacific Ocean) to determine the average temperature in which the single-cell organisms called foraminifers, lived. You see, there is a ratio in their little shells of calcium to magnesium. The hotter the water in which they lived, the more magnesium their shells absorbed.

So the calcareous fossils that the Rutgers team looked at for 11,000 to 5,000 before present didn’t show much magnesium. It was cold.

“The resulting regional stacks demonstrate that Holocene climate, at least between 40° S and 40° N, has been warming since the early Holocene, with no evidence for an early- or mid-Holocene thermal maximum in the annual mean in the tropics or Northern Hemisphere stacks.”

So why was it cold in the early Holocene? Well, you still had the impact of the glacial maximum, as ice retreated to the poles.

The Rutgers Institute of Earth, Ocean and Atmospheric Sciences provides a nice graphic to demonstrate the findings:

Climate scientist Michael Mann in his youth developed with a colleague a graph for global heating, which looked to him like a hockey stick: 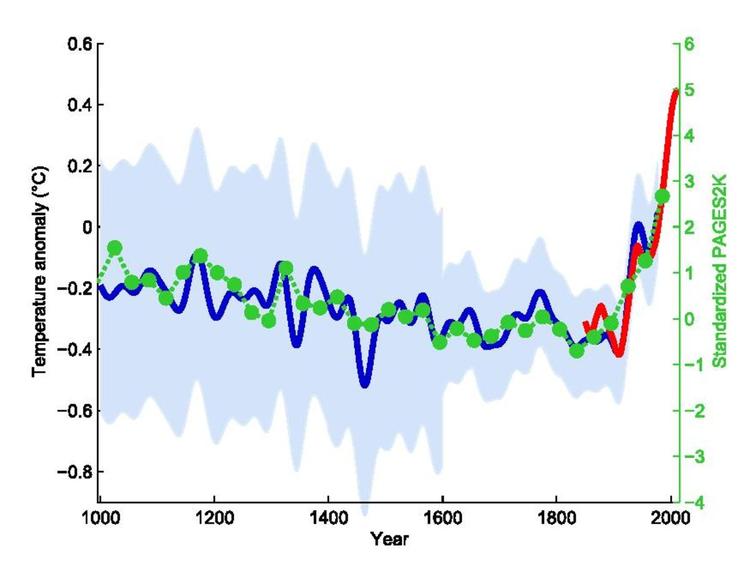 The climate denialists (a.k.a. oil companies and Saudi Arabia) attacked Mann, arguing that if he lengthened the stick back in time, there would be similar temperature spikes and ours was nothing unusual or anything to worry about.

As the Rutgers graph shows, it is still a hockey stick if we go all the way back to the beginning of the Holocene. It is hotter now than it has been during the whole era of human civilization. There is only one reason for the upturn at the end of the hockey stick (which in 2020 looks more like a scythe).

It is that humans are burning coal for heat and electricity, and burning petroleum to make their vehicles go, and burning natural gas. We’re putting 36 billion metric tons of carbon dioxide into the atmosphere annually, and since it is a heat trapping gas, guess what?

The CO2 is trapping the sun’s heat on earth and not letting it radiate out into space.

Some historians say we have now left the Holocene for the Anthropocene, for an era when earthlings are changing the climate in the direction of the tropical.

Up until we did that, it had been cool on earth, and we liked it that way. We won’t like what is coming if we don’t swing into action and stop emitting green house gases.