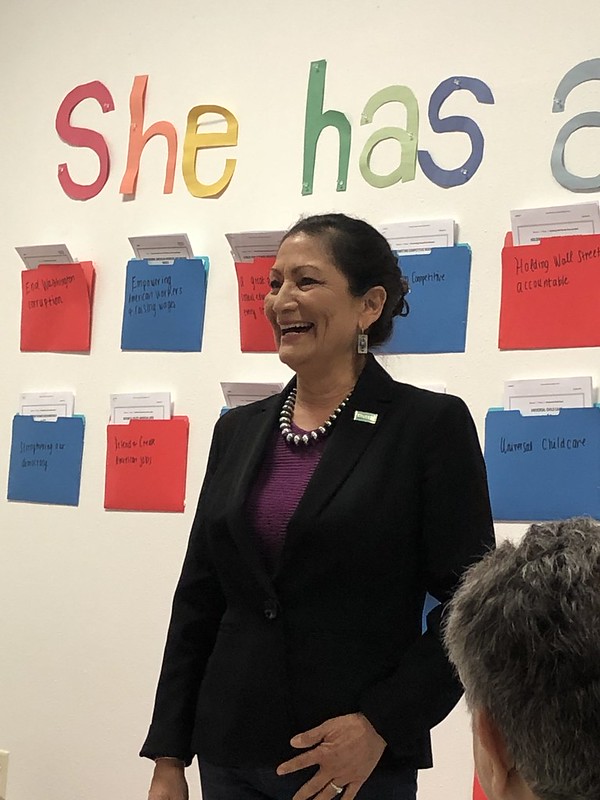 (Cronkite News) – (WASHINGTON – The Senate Monday confirmed New Mexico Rep. Deb Haaland as the next Interior secretary, a historic vote that makes her the first Native American to head a Cabinet agency.

The confirmation came over the objection of Senate Republicans, particularly those representing Western states dependent on fossil fuels, who have called Haaland an environmental extremist.

But Democrats – and four Republicans who voted to confirm the nomination – pointed to Haaland’s reputation as a bipartisan House member as well as the historic nature of her nomination.

“The confirmation of Deb Haaland is amazing,” Senate Majority Leader Chuck Schumer, D-N.Y., said after the 51-40 confirmation vote. “It creates a government that more embodies the full richness and diversity of this country.”

Critics for weeks had been attacking Haaland’s record in the House, where she was a member of the Natural Resources Committee and took stands in support of the Green New Deal and against the Keystone XL Pipeline.

During a confirmation hearing last month, Sen. John Barrasso, R-Wyo., one of the most vocal opponents of Haaland’s nomination, questioned her on her views on fossil fuels and their impact on state economies.

“We should not undermine America’s energy production, and we should not hurt our own economy,” Barrasso said then.

Other GOP senators also criticized what they called Haaland’s “radical” views that they said are “squarely at odds with the mission of the Department of the Interior and outside of the mainstream.” When they tried to pin her down on issues, Haaland repeatedly said she would merely carry out White House policy, leading some senators to charge that the two-term Democrat is unprepared to head Interior.

Opponents were largely silent Monday, but their previous criticism drew a sharp rebuke from Sen. Tina Smith, D-Minn., who accused critics of employing a double standard for white, male nominees as opposed to women and nominees of color.

“We have got to come to grips with the reality that time after time, strong women, and especially women of color, are attacked when white men with the same views are welcome to walk right through that door, unopposed,” Smith said.

“No senator referred to these nominees as ‘extremist’ or ‘radicals.’ But how did the women of color fare?” Smith asked. “We have seen this dance time and time again.”

Haaland’s supporters point to the fact that, among House freshmen, the New Mexico Democrat had among the highest number of bipartisan sponsors for her bills, according to a GovTrack.US report card. And even though that same report card ranked her “9th most politically left” in the House, her nomination was supported by Rep. Don Young, R-Alaska, who said he often disagreed with Haaland but that she was always willing to listen.

As Interior secretary, she takes over an agency with about 70,000 employees and a budget of more than $20 billion that oversees national parks and monuments, manages 480 million acres and 700 million acres of minerals, including coal, oil and natural gas, as well as renewable energy sources.

The department includes the Bureau of Indian Affairs and holds most tribal lands in trust. Haaland, a member of the Laguna Pueblo, was often referred to as a 35th-generation New Mexican during her confirmation hearing.

Arizona Sens. Mark Kelly and Kyrsten Sinema joined other Democrats Monday voting to confirm, with both saying they look forward to working with Haaland.

The confirmation drew applause from Rep. Raul Grijalva, D-Tucson, and chairman of the House Natural Resources Committee where Haaland served. He said in a written statement that Haaland will bring “a profound responsibility and commitment to climate change, equity, and public actions that all Americans will benefit from.”

The American Petroleum Institute congratulated Haaland on her confirmation, but warned that the Biden administration is already off on the wrong foot with its decision to temporarily halt mineral leases on federal lands, something Interior oversees. The institute said lifting that pause should be Haaland’s “first priority.”

“We have a shared goal for a low-carbon future, but this is the wrong approach and will only lead to more foreign energy imports from countries hostile to American interests,” said API President and CEO Mike Sommers in a statement. “We can build on the significant environmental progress the nation has made while simultaneously leading the world in energy production, or we can return to the days of relying on energy from foreign nations with lower environmental standards.”

Despite the criticisms, however, Haaland is sure to “bring people together” to move forward in a bipartisan manner, said Traci Morris, executive director of the American Indian Policy Institute at Arizona State University.

“I don’t think she has any specific agenda,” Morris said. “She’s going to bring people together to create a plan. She’s done that before.”

Sarah Oven expects to graduate in May 2023 with a bachelor’s degree in journalism and minor in political science. Oven, who has interned at the Cronkite Journal and The Arizona Republic, is working for Cronkite News in Washington this spring.

Featured Photo: Creative Commons —
01-Feb Congresswoman Deb Haaland is a congresswoman from New Mexico. She was visiting to campaign for Elizabeth Warren. By Ellen Macdonald