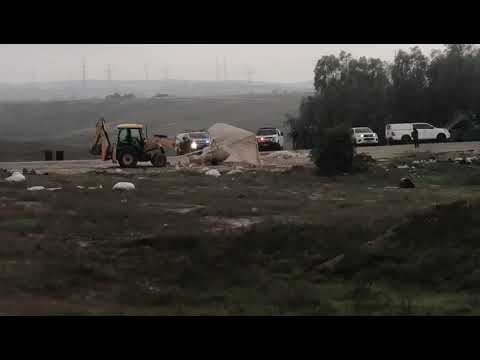 ( Middle East Monitor “> Middle East Monitor ) – Last week, just two days after the latest Israeli General Election, the occupation army demolished the village of Al-Araqeeb for the 185th time since 2000. The context is the Prawer Plan to Judaise the Negev region, which is regarded as one of the most dangerous Jewish settlement plans since 1948. About 197,700 acres are under direct Israel control in the Negev. The Arab inhabitants have been expelled to solidify the “Jewishness” of the settler-colonial state.

The repeated demolition of Al-Araqeeb is part of Israel’s plan to “transfer” — a euphemism for “expel” — the Palestinian Arabs from their homeland. Al-Araqeeb is located to the north of Beersheba in the Negev desert, in the south of occupied Palestine. It is one of 45 Arab villages that the occupation state does not “recognise”, which means that it does not get connected to public services. The Negev covers more than 50 per cent of the area of historic Palestine, around 27,000 square kilometres. As a result of the Palestinian birth rate, the indigenous population has increased from 15,000 in 1948 to about 260,000 at the beginning of this year.

Since the early years of the occupation from 1948 onwards, the Israeli authorities sought direct control over what was left of the Bedouin lands in the Negev in order to develop its military arsenal (the Dimona nuclear weapons facility is there) and establish state and private farms. In the early 1970s, the authorities required the people of the Negev to register their land with the Israel Land Administration, even though the government knew that the majority of the Negev Bedouins did not keep documents related to their land ownership and villages there, especially in the regional capital, Beersheba.

It is important to note that the area inhabited by the Arab Bedouins in the Negev — they are the indigenous people, remember — is no more than 59,000 of the Negev’s 3.3 million acres. In 1948, Israeli courts ruled that the Bedouins had no rights of ownership of their land and the land of their ancestors.

The Israelis were able, through tight demographic and settlement policies, not to recognise Arab urban expansion in the Negev region. They gathered the Negev Bedouins in specific areas for several reasons, including the breaking of their demographic concentration in areas that have a purely Arab identity. One of the areas that the Bedouins were resettled in was the town of Mar’it. This was both an uprooting and forced expulsion of the Negev Arabs. There are many Israeli plans to regroup them in three areas in the south of historic Palestine, namely Dimona, Arad and Beersheba.

In the same manner, the gathering process may take place in seven villages rather than the 70 Bedouin villages dotted across the Negev desert, which are not recognised by the Israeli government. This will make the lives of the Bedouins even more marginal in terms of health, education and other public services.

The Prawer Plan is to confiscate about 197,700 acres of their land and resettle the Negev Arabs in an area that is less than 24,700 acres. The demolition of Al-Araqeeb yet again is part of this plan.

The next Israeli government, regardless of its political affiliation, will confiscate more land in the Negev in the coming years, but the Bedouin will still not be recognised as citizens with full rights in a state that claims to be a democracy.

The occupation state and its research centres use many terms, including “the development process”, to justify its Jewish settlements in the Negev (and Galilee, in the north). Indeed, what has happened in Galilee since 1948 is arguably the model for what is planned for the Negev.

At the end of the 1948 Nakba (Catastrophe), 151,000 Palestinians were left in the nascent state of Israel. The so-called Israel “Defence” Forces took control of the refugees’ property and land under the 1950 Absentee Law, whereby those present in their country as refugees in the West Bank, say, or Gaza Strip, but not residing in their villages and towns were declared to be “absent” and their properties were confiscated. Today, such displaced persons suffer the indignity of what is essentially second class citizenship as Arabs in the “Jewish State” and are unable to return to their homes and land from where they have been expelled from 1948 onwards.

In conclusion, the latest demolition of Al-Araqeeb is part of the same process to Judaise the land of Palestine. The process starts with the demolition of homes and infrastructure, and ends with the expulsion of Arabs from their villages and towns throughout Palestine.

From January: “182nd Demolition of Al-Araqib”