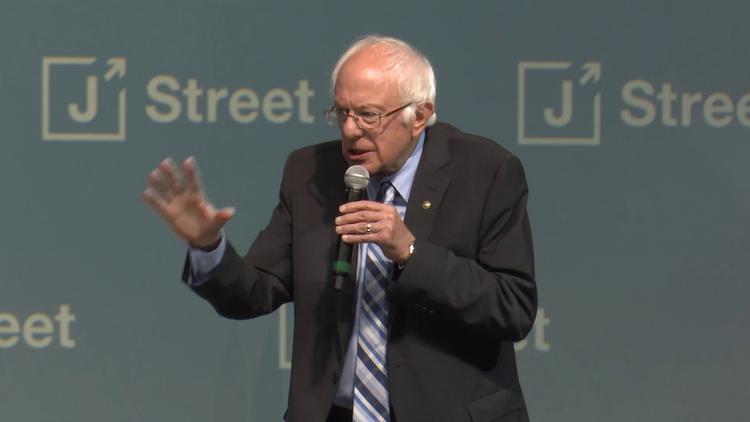 ( Middle East Monitor) – At a recent J Street Conference online, US Senators Bernie Sanders and Elizabeth Warren broke yet another political taboo when they expressed willingness to leverage US military aid as a way of putting pressure on Israel to respect Palestinian human rights. Sanders believes that the US “must be willing to bring real pressure to bear, including restricting US aid, in response to moves by either side that undermine the chances for peace.” Warren, meanwhile, showed a willingness to restrict military aid as a “tool” to push Israel to “adjust course”.

Generally, Sanders’ increasingly pro-Palestinian stances are more progressive than those of Warren. Both, though, are still hovering within the mainstream Democratic discourse: a willingness to criticise Israel as long as that criticism is coupled with equal — if not even more pointed — criticism of the Palestinians.

Seraj Assi explained this dichotomy in an article published in Jacobin Magazine: “Sanders’ stance on Israel-Palestine could undoubtedly be more progressive. He has consistently voted in favour of US military aid to Israel, which subsidises occupation, settlement expansion, and systematic violence against Palestinians. He still opposes the BDS (Boycott, Divestment, and Sanctions) campaign, signing onto an anti-BDS letter to the UN Secretary-General in 2017 and reiterating his opposition to BDS.”

However, as Assi himself indicated, Sanders’ position on Palestine and Israel cannot be judged simply against some imagined ideal. It should be seen within the context of America’s own political culture, within which any criticism of Israel is viewed as “heretical”, if not outright anti-Semitic.

Sanders’ influence on the overall Democrat political discourse is palpable. He has paved the way for more radical, younger voices in the US Congress who now openly criticise the occupation state, while remaining largely unscathed by the wrath of the pro-Israel lobby, mainly the American Israel Public Affairs Committee (AIPAC). Gone are the days when AIPAC and other pro-Israel pressure groups shaped domestic American political discourse on Israel and Palestine. Nothing indicates that the tide has turned completely against Israel, yet. However, a decisive US public opinion shift must not be ignored. It is this popular shift that is empowering voices within the Democratic Party to speak out more freely without jeopardising their political careers, as was often the case in the past.

In order to decipher the roots of the anti-Israeli occupation, pro-Palestinian sentiments among Democrats, some numbers could be helpful. While Sanders, Warren, and other Democrat officials are willing to criticise Israel but vehemently reject BDS, the membership of the Democratic Party does not hold the same view. An early 2020 Brookings Institute poll found that, among Democrats who had heard about BDS, “a plurality, 48 per cent, said they supported the Movement, while only 15 per cent said they opposed it.”

This indicates that grassroots activism, which directly engages with ordinary Americans, is largely shaping their views on the movement to boycott Israel. Ordinary Democrats are leading the way, while their representatives are merely trying to catch up.

Other numbers are also indicative of the fact that the vast majority of Americans oppose pro-Israel efforts to promote laws and legislation as a political tool to criminalise boycotts. Such laws, they rightly believe, infringe on the constitutional rights to free speech. Expectedly, 80 per cent of Democrats lead the way in opposing such measures, followed by 76 per cent of independents and 62 per cent of Republicans.

Such news must be disturbing for Tel Aviv. The Israeli government has invested heavily through AIPAC and other pro-Israel groups to brand BDS and any other movement that criticises the military occupation and systematic apartheid in Palestine as “anti-Semitic”.

Israelis find this new phenomenon quite confounding. Prime Minister Benjamin Netanyahu has been criticised repeatedly in the past, even by mainstream Israeli officials and media pundits, for turning Democrats against the occupation state by siding unabashedly with former US President Donald Trump and his Republican Party against their domestic rivals in America. In doing so, Netanyahu has basically helped to turn no-questions-asked support for Israel from a bipartisan issue into a Republican-only cause. A February 2020 Gallup poll reflected that reality, finding that 70 per cent of Democrats support the establishment of a Palestinian State, in comparison with just 44 per cent of Republicans.

The rooted support for Israel among establishment Democrats is too deep — and well-funded — to be erased in a few years, but the pro-Palestine, anti-Israeli occupation trend continues unabated, even after the defeat of Trump at the hands of the Democratic Party candidate, President Joe Biden. The past year, in particular, has been difficult for the pro-Israel lobby, which is unaccustomed to electoral disappointments. Last June, for example, the lobby painted itself into a corner when it rallied behind one of the most faithful supporters of the occupation state, Representative Eliot Engel of New York, and depicted his opponent Jamaal Bowman as “anti-Israel”.

Bowman is hardly anti-Israel, although his position is relatively more moderate than Engel’s extreme, one-sided views. In fact, Bowman had made it clear that he continues to support US aid to Israel and openly opposes BDS. However, unlike Engel, he was not the perfect candidate whose love for Israel is blind, unconditional, and everlasting. To the embarrassment of the lobby, Engel lost his seat in the US Congress, one which he had held for more than 30 years.

Unlike Bowman, Cori Bush is a grassroots activist from Missouri who ousted the pro-Israel Congressman William Lacy Clay. She has defended the Palestine boycott movement as a matter of freedom of speech, despite a relentless smear campaign describing her as “anti-Semitic” merely for appearing in photos with pro-Palestine activists. Last August, Bush — a Black American woman from a humble background — became US Representative for Missouri’s 1st congressional district, despite the efforts of the pro-Israel lobby to deny her such a position.

It is important to acknowledge the role played by individuals in the undeniable shift within the American political discourse on Palestine and Israel. Ordinary people are making a real difference. While the pro-Israel lobby still wields the dual weapon of money and propaganda, politically engaged grassroots activism is proving decisive in garnering American solidarity with Palestine, while translating this solidarity slowly but surely into political gains. This is bottom-up politics in action.