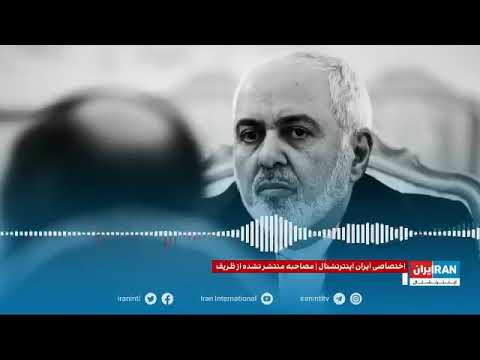 Ann Arbor (Informed Comment) – Ted Cruz and other far right demagogues have charged for over half a decade that the 2015 Iran nuclear deal was misguided because you can’t trust anything Iranian Foreign Minister Javad Zarid says. Now all of a sudden they are treating an offhand remark by Zarif in a leaked interview as the veriest Gospel, and demanding John Kerry’s head.

In a prerecorded interview with Iran International, which was supposed to be embargoed for another two months but was mysteriously put on YouTube, Zarif complained that he never had up-to-date information about Iran’s military posture because the Iranian Revolutionary Guards Corps froze him out. He complained that Iranian politics and diplomacy had been subordinated to the Guards Corps, for which he used the euphemism “battlefield.”

He said when a person was in his position, “You couldn’t say how many people [Iranians] were killed in Syria. You couldn’t say– Kerry had to inform me that Israel had struck you 200 times.”

He went on to say that the Revolutionary Guards told Iraqi prime minister Adil Abdul-Mahdi 45 minutes before they hit the al-Ayn military base in Iraq, which houses US troops in early January, 2020, in retaliation for Donald Trump’s assassination of Iranian Gen. Qasem Soleimani. He only found out about it, he says, two hours later.

This, my friend, is known in literary circles as “hyperbole,” that is, exaggeration for effect. It is not plausible that the Iranian foreign minister knew less than The Washington Post about Iranian troop deaths in Syria. Nor is it plausible that The Sydney Morning Herald knew that Israeli was conducting air strikes against Iran and its allies in Syria with deadly effect, but Zarif, who can read the newspapers in English and gets security briefings, did not.

It is like the old vaudeville routine where the comedian begins, “It was so cold…” and the audience is trained to shout, “How cold was it?”

“It was so cold, I went to the deli just for the heartburn.”

How ignorant was I being kept of the realities in Syria by Soleimani?

I was so ignorant I had to hear from Kerry that Israel was striking Iranian targets in Syria.

Things that were public knowledge. Things that Juan Cole as a blogger knew and was reporting from Ann Arbor, Michigan. Zarif didn’t know these obvious things. That’s how much he was kept in the dark.

Sec. Kerry denies that he ever said any such thing, and of course he didn’t. Zarif wasn’t reporting a conversation. He was using Kerry as a prop in his hyberbolic story.

The same Republicans now crying for Kerry to step down were silent when Donald Trump really did leak classified information to a visiting Russian delegation, revealing that Israel had placed a spy inside ISIL.

The big story here is the magnitude of the civilian-military rift in Iran. Although we tend to see Iran as a theocracy, with the chief cleric in charge, Zarif intimates that it is closer to a military dictatorship.

BBC Monitoring quotes Zarif as complaining, that for General Soleimani, “the battlefield was always the priority… and diplomacy was sacrificed.” He added, vehemently, “If the objectives of the battlefield govern the country’s strategies, this would lead to manipulation… and the battlefield would govern everything.”

According to the Euronews transcript, Zarif complained, “I was never able to ask Gen. Soleimani, for example, to stop an operation for the moment so that we could make progress in the negotiations. Not that I did not want to — Gen. Soleimani did not accept. But he repeatedly asked me to pursue certain issues in the ongoing negotiations.”

So he was complaining about the inequality of power and information-sharing inside the Iranian government, with the Revolutionary Guards always the top dog and the foreign ministry subordinate.

He added, “For example, Gen. Soleimani used to say to me that now that you are negotiating with [Russian Foreign Minister] Lavrov, present this list of 1, 2, 3 and 4 in the negotiations, for example, and ask him. But the opposite was never possible.”

Zarif also complained that the Russians had tried to sabotage the 2015 nuclear deal at the last moment. “The Russians did not think that the nuclear deal would succeed, and in the last few weeks, when they saw that negotiations were coming to an end, they began to make new proposals. At this point, Russia and France proposed that Iran be required to renew its Security Council mandate every six months to continue the nuclear deal. In other words, Iran would have had to negotiate every six months with five permanent members and 10 non-permanent members of the council in order to extend the deal in the UN Security Council, which we never accepted.”

The leaked interview has roiled Iranian politics, with hard liners demanding that Zarif resign while others defended him, saying his comments were not meant to be public. One parliamentarian darkly intimated that whoever leaked the audio intended to derail indirect US negotiations with Iran at Vienna over a mutual restoration of the 2015 nuclear deal.