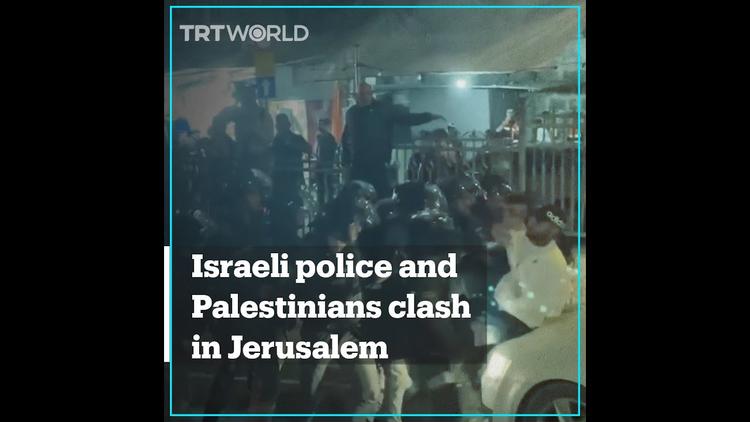 Damascus Gate or Bab al-Amoud in Arabic is the major entrance way to the Old City of Jerusalem, which is heavily Palestinian. The gate was built by Ottoman Sultan Suleyman the Magnificent between 1537 and 1541, and is the largest and most fortified of the city’s 7 gates. It is a place where Palestinians gather in the holy fasting month of Ramadan after they break their fast at sunset.

The Israeli forces used mounted police and they closed off the main streets in the area, in which throngs of worshipers and locals gather. The Israelis have set up iron barriers since the beginning of Ramadan.

The clashes are an embarrassment for caretaker Prime Minister Binyamin Netanyahu, who needs the Israel far, far right to form a coalition government and so cannot crack down on provocative extremist Jewish actions against Palestinians in Jerusalem. He called for calm. Some of his rivals called for him to step aside.

Violent clashes also broke out about a kilometer from the Old City in the Palestinian neighborhood of the Mount of Olives, al-Tur, with Israeli security forces. Arab48 says that eyewitnesses report that the violent confrontations took place mainly in two places, near the main al-Tur intersection and in the center of the neighborhood. Israeli forces unleashed stun grenades and a hail rubber bullets toward the youth protesters.

Since Monday, April 12, the beginning of the fasting month of Ramadan for Muslims, Israeli forces have arrested 100 Palestinians. Twenty have been arraigned in court and the others were conditionally released, according to attorney Muhammad Mahmud. He said that most of the arrestees were minors, and some had been badly beaten by Israeli police, with bruises to show for it.

During Ramadan in particular, many Palestinians want to pray at the al-Aqsa Mosque complex, which is the third holiest site in Islam. Israeli police have attempted to put barriers in the way of Palestinians coming there for prayers during Ramadan. On Friday, worshipers at al-Aqsa were violently dispersed when trying to perform supererogatory prayers into the night. Unarmed Palestinian civilians fought back by throwing bottles. Some also lashed out at Jewish bystanders.

Aseel Jundi at Middle East Eye explains that, at the same time, militant Jews groups such as Lehava and the New Sanhedrin have been invading the al-Aqsa compound, which they hope to raze so as to build the Third Temple on the site, which they maintain is where the earlier temples stood. The second temple was razed by the Roman Empire in 70 AD and for several centuries Jews were not allowed to live in Jerusalem, under both pagan and Christian Roman rule. It was under Islamic rule that Jews over time regained the right to live in the city.

A Lehava mob on Thursday evening marched in Jerusalem chanting “Death to Arabs,” and several of their members were arrested by police for violently attacking Palestinian pedestrians.

Any attack on or change in the status quo of the al-Aqsa mosque would draw a vehement reaction from the world’s 1.8 billion Muslims. Osama Bin Laden gave as one of 3 reasons for al-Qaeda’s September 11 attacks the Israeli occupation of Muslim holy sites in Jerusalem.

On Saturday in the West Bank, clashes broke out in Tulkarm, Kalandia and Huwara.

Likud Party member of parliament and former Jerusalem mayor Nir Barkat is quoted as saying that the Israeli police should use “an iron fist to strike all lawbreakers.” Although far rightwing Jewish mobs have attacked Palestinians in recent days, it is thought that he was referring solely to Palestinians.

Naftali Bennet of the Right (Yamina) Party, a contender for prime minister, called the events in Jerusalem a “massacre” against Jews.

Since the start of Ramadan, there have been daily clashes between Palestinians and Israeli police, who have attempted to stop large crowds from gathering at Damascus Gate and its environs, deploying main force, including rubber bullets, teargas, and water cannon.

In Gaza, Palestinians moounted a peaceful protest at the border on Saturday in solidarity with Jerusalemites, according to Arab 48. Also, small militant groups, and possibly Hamas, fired some small rockets uselessly into the Israeli desert as another form of protest. The Israeli military responded with tank fire and air strikes.