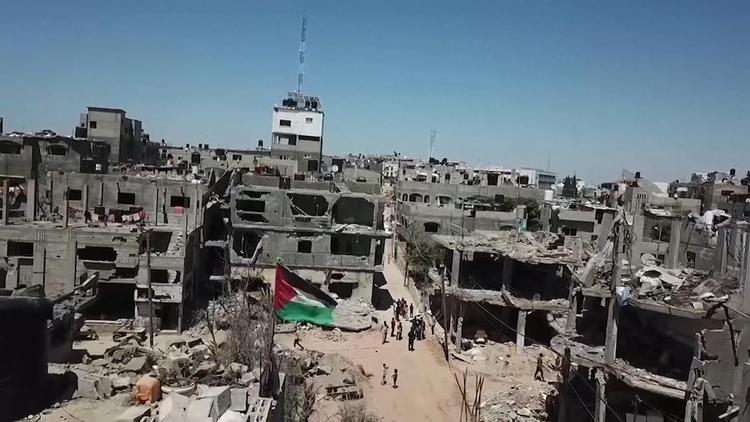 Ann Arbor (Informed Comment) – Every time Israel bombs Gaza into smithereens, it is left to others to try to rebuild. The European Union, Qatar, and even the Biden administration are offering aid. (The US is giving a piddling $150 million; even tiny Qatar is pledging $500 million.)

The Greek myths contain the story of Sysyphus, a trickster figure who ambushed Death when it came for him and chained it up. Ares ultimately freed Death, and when Sisyphus died he was sentenced in hell to keep rolling a sphere to the top of a hill, from which it would immediately descend and he would have to do it all over again, every day, all day. The Palestinians of Gaza are Sisyphus, doomed to keep rolling up a ball that will always fall right back down.

This Sisyphean cycle will continue until Israel is held accountable. The recent bombing raids left over 50,000 Palestinians homeless, again. That’s like everyone in Ames, Iowa, suddenly being kicked out of their homes and living in the street.

The nearly two million Palestinians in Gaza, half of them children, are still under Israeli blockade, as they have been since 2007. The blockade, as usual, will impede rebuilding. Because of it, 50 percent of Palestinians there are unemployed. There is electricity for only part of the day (and much less now, since Israel destroyed power lines and created a fuel shortage). Euronews says half of electricity lines were destroyed. The Strip’s main aquifer is becoming polluted and global heating is causing the Mediterranean to rise, allowing salt water to seep into it.

In 2017, UNESCO built a seawater desalination plant, which provides water to about 150,000 people in Gaza, about 7.5 percent of the population. Then China built two more. There are also over two hundred small desalination works even just for the aquifer water.

Reuters reports that “Jens Laerke, a spokesman for the United Nations Office for the Coordination of Humanitarian Affairs (OCHA) in Geneva” said the Israeli bombardment of the densely populated coastal enclave of Gaza had damaged “six hospitals and nine primary healthcare centres as well a desalination plant, affecting access to drinking water for about 250,000 people.”

It isn’t clear which desalination plant the Israeli pilots damaged, or why (did it have Hamas water in it?) But 250,000 people without potable water are 12.5 percent of the total population of Gaza.

MEMO notes that “More than 800,000 are without regular access to water due to the damage inflicted on Gaza’s desalination plants and water infrastructure” and that Israeli bombs damaged “six hospitals and 11 other healthcare facilities, including Gaza’s only COVID-19 test centre.”

Gaza has an inadequate health system because of Israel’s blockade, and Israel just made it much worse. At the same time, it injured a lot of people, and anyway there are seriously ill people in Gaza who don’t have access to the quality of hospital care they need.

BBC Arabic reports that the World Health Organization is urgently requesting that 600 patients in Gaza be allowed to go elsewhere for proper treatment. If you were injured, you’d call an ambulance and it would take you to a hospital. Palestinians in Gaza have to get Israeli officials’ permission to go to a good hospital outside the Strip. Sometimes patients die waiting for that permission.

The Gaza Strip has several cities, the biggest of which is, confusingly enough, called Gaza City, with a population of 540,000, about the size inside city limits of Albuquerque, New Mexico. Gaza municipality accuses Israeli pilots of deliberately bombing major water pipes in the city, leaving 20 percent of the city’s population without water. That is 108,000 people, 50,400 of whom are children.

Israel has the Palestinians of Gaza surrounded and carefully controls what and who goes in and out. Sometimes people speak of it as an open-air concentration camp. This diction angers supporters of Israel, but it is hard to know how else to characterize it. If they are angered, they should maybe drop the blockade, which is illegal in international law. By the Geneva Conventions, the occupying Power isn’t permitted to harm the civilians under its control, and that includes subjecting them to a blockade!

Sky News: “Qatar pledges $500m for the reconstruction of Gaza”