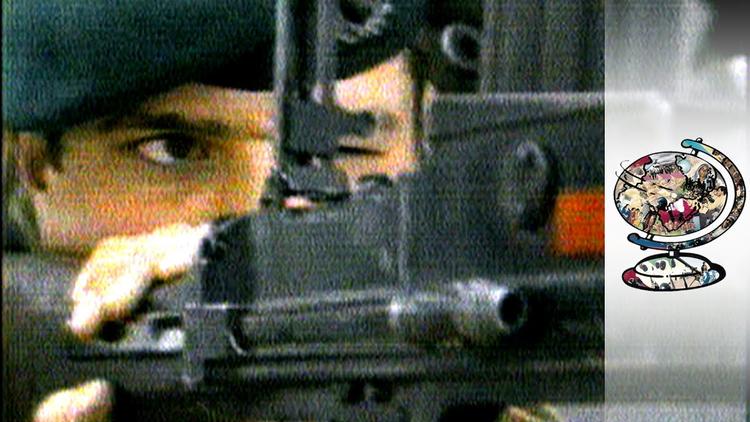 Ann Arbor (Informed Comment) – Rep. Liz Cheney has emerged as a voice for truth-telling in Trump’s Republican Party, standing up to the Big Lie that Trump won the 2020 election and denouncing her fellow representatives who sought to prevent the certification of Joe Biden’s victory and who thus helped provoke the Capitol Insurgency. Cheney warns that Trump is taking the GOP in an authoritarian direction.

This internal struggle inside the party over the Big Lie will likely lead to the demotion of Rep. Cheney from the number three position in the House Republican leadership.

It is important to reflect, however, on the ways in which her father, Dick Cheney, laid the groundwork for the current Republican infatuation with falsehood and authoritarianism.

George W. Bush made Cheney his vice president, but the elder Cheney was more than a typical VP. He had his own foreign policy shop, and the people around him helped spin the Big Lies of the zeroes.

These included Cheney’s Big Lie about Iraqi dictator Saddam Hussein’s alleged “weapons of mass destruction.” Mother Jones did a timeline of the lies.

The Bush White House had been repeatedly briefed that Saddam Hussein had no nuclear or biological weapons. The reason for which Cheney used the propaganda term “weapons of mass destruction” is that he and other members of the Bush administration believed that Saddam had declined to destroy all of his chemical weapons, and that when the invasion was over they could point to his stockpiles as a legitimate reason for the war. What Cheney did not know was that Saddam had in fact destroyed his chemical weapons stores. The documentation he provided to the UN of that destruction was correct. Cheney believed it was lies.

The fact is that chemical weapons are really only effective on the battlefield, where they can be used against massed enemy infantry, as they were in WW I and in the Iran-Iraq War. They are difficult to use for terrorism. City air flows carry them up away from people. The Aum Shinrikyo cult in Japan attempted to gas people on the Tokyo subway in 1995 to cause the advent of the next Buddha, but the air flows in the subway caused the gas to dissipate.

Cheney’s assertions that the US and its allies were in danger from defeated, ramshackle Iraq were a Big Lie.

On September 8, 2002, Cheney told Meet the Press of Saddam, “We do know, with absolute certainty, that he is using his procurement system to acquire the equipment he needs in order to enrich uranium to build a nuclear weapon.”

This assertion was completely false, and the State Department Research and Intelligence Department tried to tell the White House that there was no such evidence. French intelligence also did not believe it.

Little old me wrote before the war began,

“It appears to be the case that Iraq simply has no nuclear weapons program. Al-Baradei of the IAEC has swept the country with Geiger counters and cannot find evidence of such a thing. The program once employed 12,000 scientists, so it could not easily be hidden if it existed. The evidence given last summer and fall by US officials, including President Bush, included: 1) satellite photos showing expansion of buildings at a site once used for the program; 2) documents showing Iraqi purchases of uranium from Niger; 3) Iraqi purchase of aluminum tubing that might be used in centrifuges for the enrichment of uranium. Al-Baradei visited the buildings and found that they were now devoted to some other use and their expansion had nothing to do with nukes. The Niger documents were closely examined and found to be forgeries. The aluminum tubing has the wrong specifications for use in a centrifuge and was purchased for making conventional missiles. The case for an Iraqi WMD program in the nuclear area has thus now completely collapsed.”

The CIA had concluded that the documents purporting to show Iraqi importation of uranium from Niger were forgeries, which is why W. Bush could not source the report to US intelligence in his State of the Union Address. Cheney had access to good intelligence. He sidelined it with the Big Lie.

Around the time I was writing the above paragraph, Cheney told Meet the Press, “We believe he has, in fact, reconstituted nuclear weapons.”

Saddam Hussein did not have a nuclear weapons program, and had not had one at that point for a decade.

As for the sidelining of Ms. Cheney, her father sidelined people with rather greater ferocity.

Joseph Wilson IV was the former acting ambassador to Saddam’s Iraq who was threatened by the dictator, He retired from the State Department after the Gulf War. His wife, Valerie Plame, was an undercover (NOC) CIA operative working against nuclear proliferation, with a special interest in Iran. In order to settle the false reports of Iraqi uranium imports from Niger, Wilson was informally tasked by the agency with going to Niger on a fact-finding trip. He went, found that uranium production was firmly in French hands, and that there was no possibility of the Iraq connection being real. He wrote a report, which certainly went up to the White House.

Then the administration nevertheless kept relying on the phony document and went to war. Wilson, outraged, wrote an op-ed for the New York Times after the invasion detailing his trip and findings and charging the administration with ignoring them.

Cheney was outraged and decided to take revenge. He instructed Irv “Scooter” Libby to out Plame as CIA, apparently convinced that if Washington knew Wilson had a CIA connection they would discount his op ed as inter-agency infighting.

Outing an NOC is a very serious act. Plame was outed, her career ruined and all the agents she was running were placed in danger.

Plame was only one victim. Someone in the Bush-Cheney White House ordered the CIA to try to investigate me and destroy my reputation because of my opposition to the war and because of this blog.

Joe Wilson died recently at age 69, way too young. But Plame and I are still around. Maybe the Cheneys would like to apologize to us?

So that was the authoritarian way Cheney ran the Republican Party when he was in power, trampling on people for disagreements over policy. And he invented the tactic of making all Republicans kow-tow to the Big Lie (about Iraqi “weapons of mass destruction”).

I think some chickens are coming home to roost.

Journeyman Pictures: The Propaganda War Waged Over The Iraq Invasion (2003)