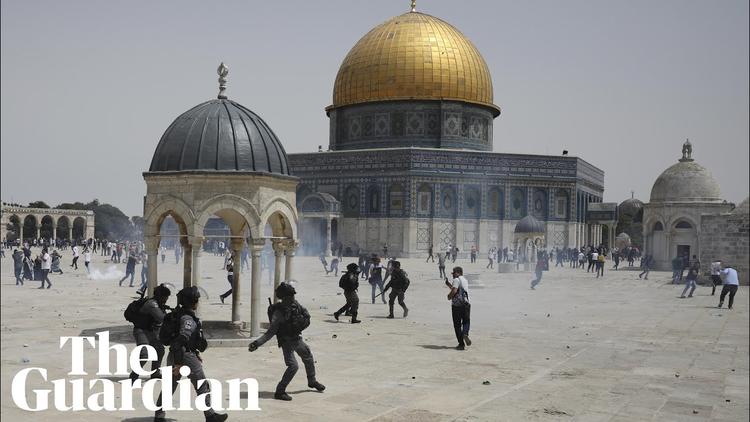 Ann Arbor (Informed Comment) – Only half a day after a ceasefire went into effect between the Palestinians in Gaza and the government of Binyamin Netanyahu in Israel, the peace was disturbed in Jerusalem at the flashpoint al-Aqsa Mosque compound.

Rabi’ Sawaid reports for Arab 48 that confrontations broke out Friday afternoon between worshipers at the al-Aqsa Mosque and Israeli security forces when the latter invaded the environs of the mosque complex after communal Friday prayers. At the same time, confrontations broke out between Palestinian youth and the Israeli Occupation army in numerous sites in the Palestinian West Bank.

Sawaid says that since 13 April there have been regular attacks by Israeli security forces and militant squatter-settler gangs, especially at the al-Aqsa Mosque and the neighborhood of Sheikh Jarrah, in order to quash protests about the ethnic cleansing of 12 Palestinian homes and their surrender to Israeli squatter-settlers.

Al Jazeera says that first, an unusually large crowd of 20,000 worshipers came for dawn prayers. Then thousands of Palestinians gathered at the al-Aqsa compound to pray Friday prayers, and many stayed to celebrate what they viewed as a victory when Israel accepted a ceasefire with Hamas after only 11 days of heavy bombardment. They also conducted mourning prayers for the some 270 Palestinians who were killed by Israeli bombing raids or by live fire.

Wire services say some were waving Palestinian flags, which is strictly prohibited by the Israeli authorities in Jerusalem. Israel has illegally annexed Palestinian East Jerusalem, in contravention of the UN Charter and the Fourth Geneva Convention.

Israeli security forces moved in to break up the celebrations.

Al Jazeera reports, “For his part, the director of Al-Aqsa Mosque, Sheikh Omar Al-Kiswani, said that the occupation forces detained 20 young men at the Lions Gate and 20 others at the Council Gate. He added that the occupation soldiers stormed the Al-Aqsa compound and their arrival at the Dome of the Rock Mosque terrified the worshipers and violated the sanctity of the place.”

Reuters reports that Israeli police say that demonstrators threw stones and some molotov cocktails at Israeli security forces, provoking the invasion of the mosque compound. Arabic language reports say that it was the celebratory rallies that provoked Israeli ire.

The confrontation lasted about an hour. Despite its brief duration, it demonstrates that the underlying causes of the recent Israeli bombardment of Gaza and crack down on Jerusalem and West Bank Palestinians have not changed in the least, and the situation remains volatile.

Muslims around the world have been deeply angered by Israeli incursions into the al-Aqsa compound, the third holiest site in Islam. Rallies were held all over Pakistan (pop. 216 mn.) on Friday, as well as in other Muslim countries.

Israeli actions in Jerusalem were among the reasons given by Usama Bin Laden for the 9/11 attacks on New York and Washington, D.C.

Israeli security forces tightened their grip on the nearby Sheikh al-Jarrah neighborhood after Palestinian activists talked of coming into it and holding Friday prayers in the buildings from which several Palestinian families are being expelled in favor of Israeli squatters (the latter were allowed to come and go freely in the neighborhood on Friday). A group of protesters, both Palestinians and leftist Israelis, gathered at the entrance to the quarter to protest the ethnic cleansing move.

The Red Crescent Society said that 82 Palestinians were injured in these confrontations. Their communique said that 4 were wounded by Israeli soldiers’ live fire, 30 by rubber-coated metal bullets, 45 suffered difficulty in breathing from inhaling military-grade tear gas, and 3 were injured by stun grenades or physical beatings.

Twenty-three were injured in the Israeli security forces’ incursion into the compound of the al-Aqsa Mosque after Friday prayers, most by rubber-coated metal bullets, and 2 by stun grenades.

At the entrance to Bethlehem, the Israeli army dispersed a march in support of Gaza with live fire and tear gas. The crowd replied by setting some cars afire in the city. Similar events unfolded in Kafr Qaddum, Nabi Saleh, western Ramallah, and two small towns in Nablus district.

In al-Bireh, a large march began in front of the Abdel Nasser Mosque in the center of the city and set out for Ramallah.

On Thursday and Friday Israeli security forces made a sweep of West Bank towns and arrested some 60 known Hamas activists. Most of the Palestinian West Bank supports the secular nationalist Palestine Liberation Organization, but there are pro-Islam Hamas supporters as well.