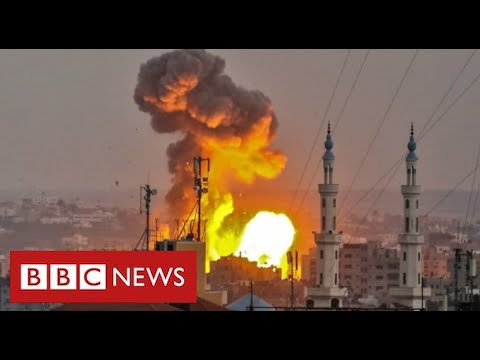 Ann Arbor (Informed Comment) – A war is when two antagonists fight one another all-out, until in fairly short order one wins and the other loses. On December 11, 1941, Mussolini declared war on the United States. Then later on the US invaded Italy from Tunisia under Gen. Patton. On July 25, 1943, Mussolini lost power and King Emmanuel admitted that the war was lost. That is a war. Two armies, a big fight and a win or loss.

Israel’s staccato bombardment campaigns against Gaza (2008-9, 2014, 2021) are not a war. Israel has an army, Gaza does not. Israel has a sophisticated Air Force with 581 aircraft, including fighter jets and helicopter gunships. The Palestinians in Gaza don’t have a conventional army or navy or air force, don’t have tanks or aircraft or artillery. Most of their rockets are high school science experiments (they have a handful of longer range rockets). The Izzuddin Qassam Brigades have a few tens of thousands of poorly armed and trained volunteer militiamen. If they tried to mount a conventional assault on Israel they would all be killed in an afternoon. The Asian Spa killer in Atlanta killed more people than Hamas has since the beginning of the current hostilities.

The two cannot have a war because the Palestinians cannot mount a war.

So if it isn’t a military conflict, what is it? It is a performance of Israeli dominance and Palestinian defiance.

BBC Monitoring reports that Israeli journalist Nahum Barnea writes in Yediot Aharonot that the Netanyahu government has no intention of launching a ground operation, and without such an operation there will be no Israeli victory (guerrilla movements cannot be defeated by aerial bombardment). He concludes that the Israeli offensive is simply a way of playing for time. When the shooting is over, the Israeli government can hope for four to seven years of relative quiet. He complains that no one in the government has any intention of changing the paradigm. The government, he implies, is not engaging in a Clausewitzian enterprise (“war is diplomacy by other means”) and is not seeking to force Hamas into a long term agreement But nor is it capable of destroying Hamas in Gaza.

So it is a status quo action, seeking to turn the clock back to the beginning of May and keep it frozen there for a few years.

The right wing in Israel would like simply to ethnically cleanse the Palestinians of Gaza, sending them all off as boat people to Europe or into the desert to Egypt. (We know this because occasionally they say the quiet part out loud.) But the consequences of trying to behave this way for Israel would be severe, especially in Europe, with which it does half its trade, and so the Israelis are stuck with blockading Gaza and occasionally brutalizing it.

They are stuck with being cruel jailers of 2 million people, 1 million of them children, denying them decent lives or basic human rights, denying them reparations for having made them refugees and stolen their property, now worth billions. The Israelis face a form of the kidnapper’s dilemma. They have to keep the Palestinian children of Gaza tied up in a dark basement forever, since they cannot afford to face the consequences of releasing them and in this version of the dilemma they don’t have the option of just killing or ethnically cleansing them all.

It is a prison for the Israeli soul of corrosive, corrupting power, and has assisted the rise to power of the far right in the Jewish state, so that grandchildren of Holocaust survivors are palling around with anti-Semitic white nationalists in Europe. Only by demonizing Palestinians and only by assertions of racial superiority can they justify keeping the million children hostage in their dark basement.

When the kidnapped attempt to get free, attempt to chew through their ropes, attempt to attack their tormentor, the kidnapper has to punish them. Perhaps kill one to frighten the other hostages into submission. Or deny them light or sufficient food. Or beat them all.

The US government is actually doing Israel no favors in protecting it from UN Security Council sanctions for its war crimes. Israel is stuck in its kidnapper’s dilemma in part because the US is an accomplice in the kidnapping and has removed any incentives for better behavior.

Arab 48 reports that Israeli observers point out that the fighting will likely die down by mid-week. Gaza’s energy infrastructure is so ramshackle as a result of Israel’s blockade and of the current bombardment that the international community will put enormous pressure on Netanyahu to allow in fuel.

Gaza has been reduced to three hours of electricity a day. People sick at home with Covid who have a home oxygen container can’t use it because it needs electricity. Premature babies in hospital are in danger if the hospital’s generator stops working for lack of fuel.

One of the ironies of being a kidnapper is that the latter becomes responsible for keeping the hostage alive. Israel, having been on the receiving end of some Hamas rockets, will have to send in fuel and allow in staples or risk of looking like the Soviets in the Ukraine in the 1930s or like the British in the Boer War– i.e. look like they are starving people under their control.

The Israeli government will at some point stop the sophisticated bombing runs by F-15s . Hamas and Islamic Jihad will stop sending hundreds of rockets three miles into Israel to land in the desert as a form of symbolic defiance.

But nothing will change fundamentally.

The Palestinian children of Gaza will go on being tied up in Israel’s creepy basement.