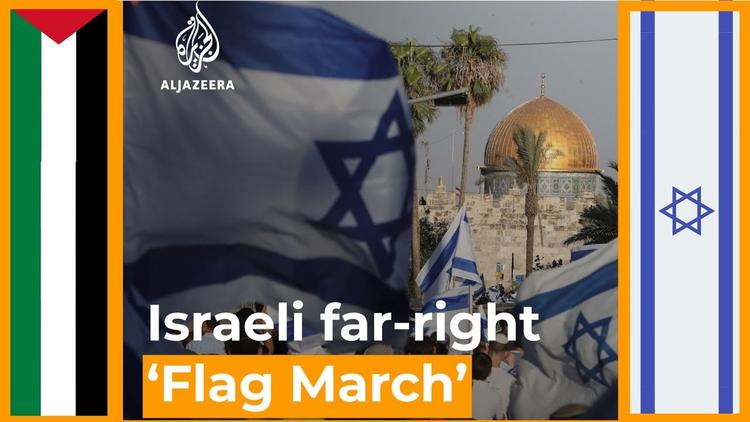 ( Middle East Monitor) – Ultranationalist, right-wing Israeli settlers carried out their “Flag March” in Jerusalem yesterday. Due to security concerns, the route was changed from previous years, and they passed the Jaffa Gate of the Old City rather than the usual Damascus Gate. Also as usual, the settlers chanted “Death to the Arabs” and “Jerusalem is Jewish”. It was extremely provocative — which was the intention, of course — and it provided an opportunity for the Jewish settlers to express their hatred of Muslim and Christian Palestinians.

The march is an annual event to commemorate the capture of Jerusalem by Israeli troops in 1967. The first march was held a year later. That and those which followed have never been peaceful.

Originally scheduled for 10 May, the Palestinian resistance fulfilled its pledge of retaliation unless Israel stopped its attacks on the people of Jerusalem, so it was postponed to last Thursday. Again, it was postponed — possibly so that the outgoing Netanyahu government wouldn’t have to make the decision — and was held yesterday. It was the new Naftali Bennett-led government which gave the go-ahead.

Israeli public broadcaster Kan reported that the government sent messages to the Palestinian Authority and Jordan that it was not looking for any escalation through the approval of the Flag March. Channel 13 News reported that a message was sent to Hamas through Egypt asking the movement not to escalate the tension, and warning it of a harsh response if it did. Cairo told Hamas that any escalation in response to the Flag March would “embarrass” it.

The Palestinian resistance in Gaza was not affected by the empty threats made by the Israeli occupation authorities, but said that it would follow up the situation and would take the necessary action without reference to anyone, if and when needed. “All options are on the table,” said Hamas. It pointed out that escalation could be avoided “if the Flag March does not get out of control.”

The controversy over the march turned it into a challenge which it looked as if the Israeli occupation would win. On the ground, though, the result was the exact opposite. The march proved that Israel was beaten by the Palestinian resistance, whose street cred was raised among the people of occupied Palestine, the Arab world generally and Muslims.

To make way for the estimated 2,500 settlers, the Israeli police and security forces fired tear gas and rubber bullets at local Palestinians along the route. More than 30 were wounded, and some were arrested.

Fearful of a Hamas response to the march, the Israeli authorities rerouted civilian flights to and from Ben Gurion Airport away from the Gaza Strip. The Iron Dome missile defence system was put on standby.

Although the extremists who took part in the march were happy, they not only angered Israeli officials but also probably drove scores of young people into the arms of the resistance cadres. Designated recruiting sergeants couldn’t have done a better job.

The Palestinian resistance celebrated this latest victory, which was recognised even by the Israeli media and analysts.

“The brave positions and decisions of the Palestinian resistance forced the Israeli occupation to change the path of the route away from Al-Aqsa Mosque, change the civilian aircraft routes and beef up the deployment of the Iron Dome,” said Hamas. “A new era and formula of deterrence vis-à-vis Israel has started.”