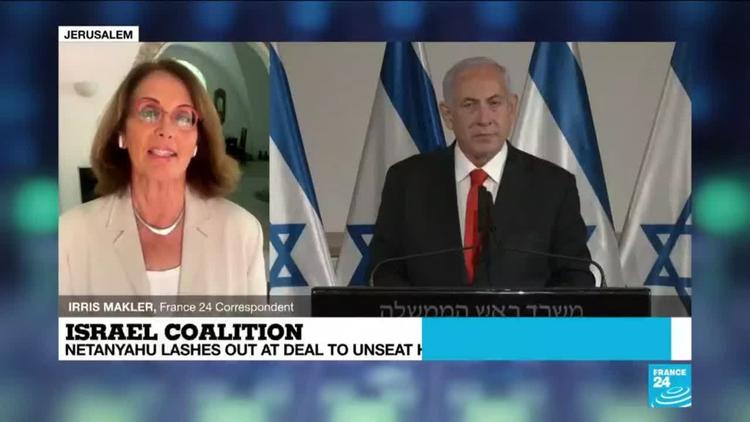 Ann Arbor (Informed Comment) – Outgoing Israeli prime minister Binyamin Netanyahu lost his chance to form a government as the deadline ran out on Thursday, but he swung into action in an attempt to stop his rivals from forming one, either.

A successful prime minister would have to be able pass a confidence vote in the Israeli parliament or Knesset, requiring a simple majority of 61 yes votes in the 120-member body. Netanyahu’s rivals, the right wing extremist Naftali Bennett of the Yamina Party and the centrist Yair Lapid of the Yesh Atid (There is a Future) Party, have lined up exactly 61 votes.

The slimness of this majority, however, makes them vulnerable. Netanyahu called on right wing members of the coalition not to vote for it and instead to join him.

The Times of Israel reports that Netanyahu met Thursday with the main umbrella organization for Israeli squatters on Palestinian land in the West Bank. The squatters are clearly afraid that the new government will not be supportive of them in the way that Netanyahu has been, even though the proposed new prime minister, Bennett, is a former squatter himself. That is because Bennett will require the support of small left wing parties and of one Palestinian-Israeli party, to remain in power and so may not be able to do anything practical to support the settler movement.

It is a severe violation of the Geneva Conventions for an occupying power to send its own population in to settle on occupied territory. The 1949 Geneva Convention was formulated to forestall a repeat of the sort of thing Nazi Germany did in Poland, where it expelled Poles and brought in German squatters in hopes of Germanizing it and annexing it.

Netanyahu proposed a massive demonstration by the Haredim at the house of one of the right wing members of Bennett’s Yamina party, in hopes of intimidating him into withdrawing, leaving the new coalition with only 60 members.

Barak Ravid at Axios reports that Netanyahu is targeting Yamina member Nir Orbach in particular, and has manipulated Orbach’s rabbi into pressuring him to withdraw.

Orbach’s rabbi? Orbach is reportedly not in fact enthusiastic about the coalition, but his tweets suggest he won’t bring it down. He is reportedly being besieged by right wing protesters at his own home.

Netanyahu is telling Israelis that Bennett’s will be a “far left government,” even though it has far right parties in it, including that of its head.

The Arabic press says that Netanyahu is, typically, playing the race card. He is accusing Bennett of having “sold” the Negev desert to Mansour Abbas of the Muslim fundamentalist United Arab List. Abbas, a former dentist whose religious fundamentalism makes him unsympathetic to secular Palestinian nationalism, is the Palestinian-Israeli equivalent of the Jewish Haredim or ultra-Orthodox who reject Zionist nationalism. Abbas had asked for some assurances from Bennett regarding the treatment of Palestinian-Israelis inside Israel, which is what Netanyahu was trying to twist into a scandal.

But Netanyahu’s favorite argument is that the Biden administration wants two things from Israel, a freeze on new squatter-settlements on the Palestinian West Bank and acquiescence in the revival of the 2015 Iran nuclear deal. Ravid says Netanyahu insists that he can and will stand up to Biden on these issues, but that Bennett will fold.

Laurie Kellman at AP had reported on Tuesday that Netanyahu, seeing the writing on the wall, had already begun presenting himself to the Israeli public as the only one who could foil Biden.

(The 2015 nuclear deal effectively prevented Iran from producing highly enriched uranium and closed off all plausible pathways to a bomb, putting Iran under close inspection by the International Atomic Energy Agency. Since Netanyahu helped destroy the deal, Iran has vastly expanded its enrichment program and is enriching to 60%. You need 95% to make a bomb. So Netanyahu’s opposition to the deal has actually freed Iran.)

Netanyahu was already talking this way last week this time when Secretary of State Antony Blinken visited. Al-Mayadeen says that the Blinken entourage were absolutely floored by Netanyahu’s discourse, since President Biden had gone out of his way to be supportive to Israel.

If this reaction is correctly reported, it is worrisome, because it indicates that the Biden team has no idea what a slick operator Netanyahu is. Of course, this is the same team that thinks they can negotiate an infrastructure bill in good faith with Mitch “Legislative Graveyard” McConnell.

France 24: “Netanyahu lashes out at deal to unseat him”