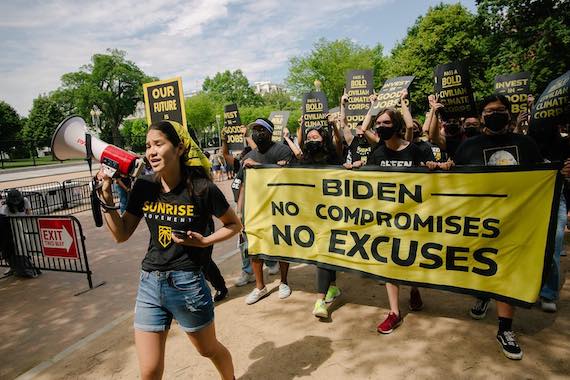 Tired of waiting for progress as the world burns, climate activists are shaping the public narrative — through mass protest and targeted actions — to favor federal legislation.

( Waging Nonviolence ) – Over 500 activists from the youth-led Sunrise Movement descended on Washington, D.C. last week for one of the largest U.S. climate protests since COVID-related restrictions began easing. The young people rallied in front of the White House on June 28, to hear from a range of speakers, including Reps. Jamaal Bowman and Cori Bush, Indigenous pipeline fighters from Anishinaabe land in Minnesota and Sunrise organizers from all corners of the country. All called on President Biden to act swiftly to address the climate crisis.

“I’m from Bethlehem, Pennsylvania, a town built around Bethlehem Steel, a job hub that manufactured steel for infrastructure all over the country,” Sunrise activist Mary Collier told the crowd. “But when politicians abandoned my city, all those good-paying jobs vanished.”

Amid ongoing talks between the White House and Congress over a national infrastructure bill, Sunrise and other climate groups see an opportunity to attack the climate crisis while rebuilding the economies of blue-collar towns like Bethlehem. However, now that a bipartisan infrastructure bill has been released that contains little in the way of support for clean energy, activists are urging the Biden administration to show it truly is committed to climate action. One of Sunrise’s priorities is funding for a Civilian Climate Corps that would employ 1.5 million people in jobs like clean energy construction, sustainable infrastructure and reforestation.

After the recent rally at the White House, Sunrise protesters blockaded all 10 entrances to the building, leading to dozens of arrests. Yet, despite their anger at the president’s recent compromises, the young protesters are not anti-Biden. In fact, many volunteered hundreds of hours last year to ensure his election.

“Last fall I spent all my time getting Pennsylvanians out to vote,” said Collier, who along with dozens of other youth marched 105 miles from her state’s capital in Harrisburg to the White House. “Even after Biden won, I didn’t stop — I organized Every Vote Counts actions to defend the vote we had got out for him. We elected Biden with the guarantee that he would create good-paying jobs of the kind I dreamed about, but instead I’ve seen him compromising with the GOP and negotiating away Bethlehem’s future.”

A once in a lifetime opportunity

The Biden administration earned early praise from climate groups soon after taking office in January. On Inauguration Day, Biden rejected the permit for the Keystone XL tar sands pipeline and committed the United States to re-joining the Paris accord. Since then, however, the administration has showed signs of wavering in its commitment to climate justice, refusing to revisit permits for the controversial Line 3 and Dakota Access pipelines. Perhaps most consequentially from a long-term climate perspective, the White House has seemed on the verge of bargaining away commitments to clean energy and zero-emission vehicles originally included in its framework for a national infrastructure bill.

Under pressure from moderate lawmakers like Sen. Joe Manchin of West Virginia, Biden agreed last month to support bipartisan infrastructure legislation that includes almost no major climate policies. Progressive lawmakers are now pushing Democratic leaders to pass a separate bill through the budget process known as reconciliation, which would include support for clean energy, hundreds of thousands of electric vehicle charging stations and other climate priorities. Whether such a bill will eventually move forward remains to be seen. But meanwhile, the administration and Congress face pressure from another source: a climate movement that is tired of waiting for progress as the world burns.

“We have what is potentially a once in a lifetime opportunity to take real action for the climate,” said Ivy Jaguzny of Zero Hour, a youth-led climate activist organization founded by high school students. “It’s our job to push Biden every single step of the way, because progress isn’t going to happen on its own. It’s only going to happen if we continue to demand what Biden promised to deliver during his campaign.”

The climate movement today is far bigger, better-organized and more active than at the beginning of any previous Democratic president’s term. And while COVID largely prevented activists from organizing large in-person protests in the first few months of Biden’s administration, that is changing as virus-related restrictions related to travel and gatherings ease. Now, climate activists are shaping the public narrative in ways they have often struggled to do in the past.

“Democratic House members joined protesters from the left-leaning Sunrise Movement outside the White House to demand that far-reaching climate policies be added to the [infrastructure] package,” read a recent Washington Post article that included a photo of Sunrise activists marching behind the banner “Biden: No Compromises, No Excuses.” This is as an example of how high-profile protest tactics are allowing climate organizers to set the terms of the conversation on Capitol Hill with an authority they have rarely enjoyed. During former President Obama’s first year in office, for example, progressive activist voices were often drowned out by the more vocal, attention-garnering Tea Party.

In fact, it was not until a couple of years into Obama’s first term in office that the former president faced large-scale direct action protests focused on climate issues. In contrast, less than six months into Biden’s presidency, the climate movement has not only blockaded the White House, it has taken its demands to key Congressional districts all over the country.

“We have walked 266 miles to get here,” said Sunrise activist Ema Govea, standing at the base of the Golden Gate Bridge last month. Govea and roughly 100 other Sunrise members had just marched from Paradise, California — a town demolished by wildfires in 2018 — to San Francisco, where they rallied outside the homes of House Speaker Nancy Pelosi and Sen. Diane Feinstein. “This is not the end,” Govea added. “This march will reignite a movement, and this is just the beginning.”

The march from Paradise to San Francisco was one of three similar treks recently organized by Sunrise in the lead-up to last week’s White House action. In the South, activists marched 400 miles from New Orleans to Houston, where they ended their journey with a sit-in at Sen. Ted Cruz’s home. In Pennsylvania, marchers like Collier walked all the way to the White House itself. The young people involved show how climate groups are using creative tactics and direct action to bring their demands not only to Washington, D.C. but also the home states of key members of Congress.

As a next step, Sunrise — which is organized into local chapters or “hubs” scattered all over the United States — is calling for a nationwide day of action in support of the Civilian Conservation Corps, to be held on July 15. This strategy of combining large, high-profile protests in the nation’s capital with more distributed actions that pressure individual members of Congress is one Sunrise has used successfully before, including in late 2018 when the organization helped put the idea of a Green New Deal at the center of Congressional Democrats’ agenda. However, Sunrise Movement is only one among many climate groups now organizing for federal action in far-flung parts of the country.

Other than the infrastructure package, probably no climate-related issue has garnered more attention from national groups this year than the Line 3 pipeline, a conduit for tar sands oil from Canada. In early June, thousands of people converged on Minnesota for days of Indigenous-led protests against the pipeline, which culminated in a direct action that temporarily stopped work on a pump station. Hundreds joined a semi-permanent encampment in the pipeline’s path, and the protests show no signs of dying down.

On June 30, Rising Tide North America held a virtual direct action training to prepare people to join the growing movement against Line 3. An email to supporters said the training would cover “principles of direct action … what to take to an action and how to plan an action,” as well as “what you need to know about coming to support the frontlines” on Anishinaabe land. All this is indicative of a climate movement emerging from the COVID pandemic more coordinated at a national level than perhaps ever before, as well as one that has learned over the past year to use online tools like Zoom to maximum effect.

Much of this movement’s energy post-COVID has gone into pressuring Congress and the Biden administration to take action, whether by passing a strong infrastructure bill or stopping fossil fuel projects like Line 3. At the same time, other activist groups are pursuing another strategy they have become increasingly adept at: strategically confronting the political and economic power of fossil fuel industries themselves.

Shaping the narrative to win

On June 16, Maine Gov. Janet Mills signed into law a bill making the state the first to adopt legislation requiring its public employee pension funds and state treasury system to divest from fossil fuels. It was a momentous occasion for climate activists fighting to win progress at the state and local levels that could help build momentum for federal action.

“It’s a good time for the climate movement to have a win, especially one as concrete as this,” said Anna Siegel of Maine Youth for Climate, one of the organizations that pushed for the divestment bill. “These are victories that help move us forward into a world that puts people and planet over the profits of corporations.”

In fact, 2021 has seen a string of successes for the fossil fuel divestment movement. According to Divest Ed, which works with student activists on college divestment campaigns, at least 10 U.S. higher education institutions have unveiled new divestment commitments so far this year. They include University of Michigan, Princeton, Columbia College and University of Southern California. Each announcement, like the statewide divestment campaign in Maine, targets the fossil fuel industry’s public image and contributes to a larger public narrative against which debates over federal legislative and regulatory action take place.

There can be no denying climate groups have a long way to go before they can expect to push federal climate legislation over the finish line, if such a victory occurs at all during Biden’s crucial first year in office. The fossil fuel industry also still has plenty of political clout, as evidenced by a recent undercover video recorded by Greenpeace, which shows an Exxon Mobil lobbyist bragging about the company’s efforts to kill climate provisions in the infrastructure package. Even so, grassroots activists are shaping how media and political figures talk about climate in ways that would have been hard to imagine even a few years ago.

“We’re not just marching in the streets, although we’re doing that,” Zero Hour’s Jaguzny said. “We’re lobbying and advocating for meaningful climate actions on the Hill. We’re trying to keep oil in the ground. We’re trying to build clean energy and public transit for everyone and facilitate a just transition. This is the time for action — it’s now or never.”

Nick Engelfried is an environmental writer and activist. He currently lives in the Pacific Northwest.

Featured Photo: Members of Sunrise Movement blocked the entrances to the White House on June 28, resulting in dozens of arrests. (Sunrise Movement/Rachael Warriner).