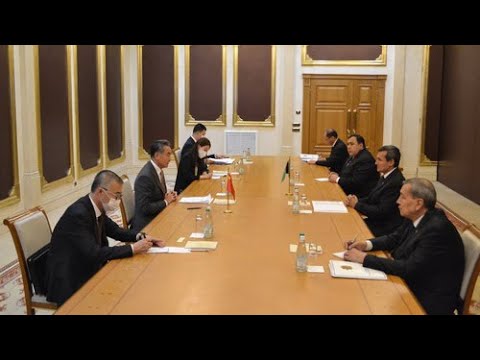 ( RFE/RL ) – As the security situation in Afghanistan worsens, Chinese Foreign Minister Wang Yi has begun a high-profile tour of Central Asia that analysts say is an effort by Beijing to boost its interests in the region.

The weeklong visit to Turkmenistan, Tajikistan, and Uzbekistan comes as the Taliban continues to take territory from Afghan government forces amid the withdrawal of U.S. and NATO troops from the country, which is set to be completed by August 31.

Wang will look to shore up Beijing’s rising clout while discussing the growing security concerns in the region as the departure of foreign troops winds down and fighting between the Taliban and government forces intensifies.

The Taliban offensive has left Beijing and the Central Asian states — as well as regional players Iran, Pakistan, and Russia, all with key interests in Afghanistan — anxiously eyeing the tenuous security situation on their doorstep. Afghanistan’s neighbors have also stepped up their diplomatic efforts with the main parties in the conflict as they scramble to prevent it from spilling across their borders.

“I wouldn’t expect any surprises from this trip, but Beijing will use this as an opportunity to show its regional power ambitions,” Temur Umarov, an expert on China in Central Asia at the Carnegie Moscow Center, told RFE/RL.

The trip began with a two-day visit to Turkmenistan on July 12 followed by meetings in Uzbekistan and Tajikistan, where Wang will attend an annual gathering of the foreign ministers of the Shanghai Cooperation Organization (SCO) in the Tajik capital, Dushanbe, to focus on what Chinese Foreign Ministry spokesman Wang Wenbin called Afghanistan’s “post-troop withdrawal era.”

The SCO — a Eurasian political bloc focused on counterterrorism that includes China, Kazakhstan, Kyrgyzstan, India, Pakistan, Russia, Tajikistan, and Uzbekistan — has been one of the main vehicles through which Beijing has expanded its influence in Central Asia and the wider region, which could grow amid the fluid situation in Afghanistan.

China’s future role, however, is still being defined. Beijing maintains a strategic relationship with Pakistan, the Taliban’s main backer, and strong ties with Iran. China’s political and economic influence in Central Asia has also expanded dramatically in the last decade.

But while Beijing holds influential cards for Afghanistan, its “strategy is unclear and vague,” Umarov said, who adds that even though “China doesn’t want to replace the United States” in Afghanistan, it also won’t be taking a hands-off approach.

“In the future, we can likely expect more [Chinese] engagement with different parties in the Afghan conflict, but only if it fits China’s interests in the region,” said Umarov. “The most important goal for China is to seal the chaos inside Afghanistan’s borders.”

The View From Central Asia

Those spillover fears, as well as concerns over an uptick in Islamist extremist activity, are shared by Afghanistan’s northern neighbors in Central Asia. They have also been at the heart of a series of recent moves across the region and will be on the table in Dushanbe during the SCO summit.

Taliban representatives have also visited Islamabad, Moscow, and Tehran in recent weeks as the group has looked to reach out to Afghanistan’s anxious neighbors and calm fears over a security vacuum emerging in the country following the U.S. withdrawal.

On July 5, Tajikistan — where two-thirds of the country’s 1,357-kilometer-long border with Afghanistan is now under Taliban control — sent 20,000 army reservists to guard the border and called for assistance from the Collective Security Treaty Organization (CSTO), a Moscow-led military bloc of which Tajikistan is a member.

Similarly, both Uzbekistan and Tajikistan have seen refugees and defeated Afghan forces flee across their borders amid intensified fighting in recent weeks.

Tajikistan in particular remains a crucial focal point for wider security issues in the region. The country hosts approximately 7,000 Russian troops at a major military base and is also home to a Chinese military outpost along the Afghan-Tajik border, which is Beijing’s only military facility in the region.

The collection of military compounds is reportedly used by Chinese personnel for intelligence gathering focused on counterterrorism, specifically on Uyghur militant groups based in Afghanistan whom Beijing wants to monitor and prevent from crossing into its western Xinjiang Province.

Moscow remains a regional military leader and views Central Asia as within its “sphere of influence.” While China and Russia share similar concerns over regional stability, the Kremlin remains apprehensive about an expanded Chinese military footprint in the area, a factor that analysts note Beijing will need to be mindful of amid the evolving situation in Afghanistan.

“I think it would be difficult for Moscow to accept Beijing playing the first violin in the region,” Nargis Kassenova, a senior fellow at Harvard who focuses on China’s role in the region, told RFE/RL.

China And The Taliban

While China holds broader regional ambitions, its most pressing concerns for Afghanistan remain narrowly focused on Uyghur militants and its own security.

The Taliban’s historical connections to Uyghur extremist groups affiliated with Al-Qaeda go back decades and have been a source of alarm for Beijing in the past, particularly the East Turkestan Islamic Movement.

The United States and other countries previously branded the group a terrorist organization, but the Trump administration removed that designation in 2020, sparking a backlash from Beijing.

China has, in part, used the existence of such extremist groups to justify its crackdown in Xinjiang, where it has interned more than 1 million Uyghurs, Kazakhs, Kyrgyz, and other Muslim minorities in a vast camp system, according to United Nations human rights officials.

Many Uyghur militants previously based in Afghanistan moved to Syria in recent years, but a 2020 United Nations Security Council report estimated that several hundred militants remained in the country.

Despite this tense history, the Taliban has refused to condemn China’s treatment of Muslims in Xinjiang and has begun courting Beijing’s favor by saying it will not harbor Uyghur militants in the territory it controls.

“We are seeing some sophisticated statements from the Taliban about working with China,” Niva Yau, a researcher at the OSCE Academy in Bishkek, Kyrgyzstan, told RFE/RL. “It shows that there is interest from the Taliban in gaining legitimacy and recognition from China.”

In an attempt to assuage Beijing’s concerns, Taliban representatives have engaged in public outreach, giving statements to Chinese media and to the foreign press that China is a “welcome friend” in Afghanistan.

Taliban spokesman Suhail Shaheen told reporters in Qatar on July 8 that Afghan territory under the groups’ control would not be used against other countries and that the Taliban would not interfere in China’s internal affairs.

While Beijing officially supports the government of President Ashraf Ghani in Kabul, China is reportedly pressing the Taliban to limit its ties to Uyghur militant groups in return for financial investment in Afghan infrastructure should the hard-line Islamist group gain control over the country.

“The Taliban know that if they get control [of Afghanistan] they will need recognition of statehood and legitimacy from its neighbors. That includes Central Asia [and] China,” Yau said.

Reid Standish is a correspondent for RFE/RL focused on China in Eurasia. He previously worked for Foreign Policy magazine in Washington and Moscow and has reported across Europe and Central Asia for The Atlantic, The Washington Post, and Politico Europe.