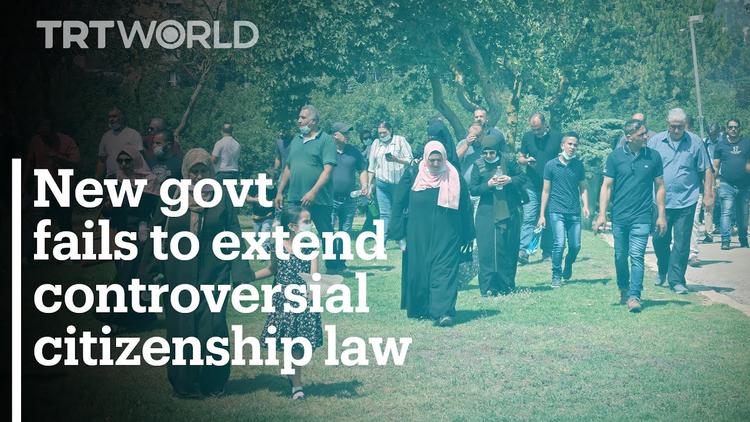 The law bars the spouses of Palestinian citizens of Israel from receiving citizenship.

I say “effectively” since technically they could marry, but would then be forced to live apart since Palestinians in the West Bank and Gaza are banned from living inside “Israel proper” by a whole series of other racist laws.

The law does not apply to marriages of Jewish Israeli citizens to Jewish Israeli settlers in the West Bank. It is indisputably a racist law, discriminating against Arabs.

It was introduced as a supposed “emergency” law in 2003, but until now, it has been renewed annually without fail. However, what that does mean is that the Knesset must vote each year to ensure the law stays in full effect.

But what happened this week was not some sudden radical change of heart by Israeli lawmakers. It was rather a matter of opportunism by the new opposition, led by Benjamin Netanyahu, the last prime minister. The vote to extend the law failed by the narrowest possible margin, 59 to 59.

Netanyahu and his political allies in the opposition support the law in principle, and have voted to extend it many times in the past. They simply sought to embarrass the fragile new coalition government led by Naftali Bennett (another hard-right racist and a former Netanyahu coalition partner).

Only a tiny minority of six Knesset lawmakers voted against the law as a matter of principle. These were Palestinians from the Joint List group.

In a crude reminder of how all Zionism is racism – and not only the right-wing Zionism promoted by demagogues like Netanyahu and Bennett – even the supposedly “left-wing” Meretz party voted to extend the racist marriage law.

Meretz is part of the new coalition government led by hard-right racist Bennett, so there was an element of political opportunism to Meretz’s vote in favour of the racist law. But mostly, it was ideological: Meretz is a Zionist party, so it voted for a Zionist law.

One of their lawmakers, Yair Golan, ranted against the opposition in the Knesset.

He accused Netanyahu and his ultra-right allies in the opposition (such as Kahanist party leader Itamar Ben-Gvir) of being in the “anti-Zionist, anti-nationalist camp” and of “betraying the Zionist vision.”

A retired high-ranking military officer, Golan spoke in openly racist terms of the opposition supposedly wanting to “drown Israeli citizens in a sea of Palestinians.” Some leftist. It was a phrase that could have just as easily come out of the mouths of Katie Hopkins or Tommy Robinson.

And it wasn’t only Meretz.

Arise Israel, an activist group that had been one of the leaders of the long-running anti-Netanyahu protests, also lashed out against the opposition in racist terms. This is the consequence of Zionism: the institutionalisation of racism across an entire society on every level.

When I broke the story of Assaf Kaplan, the Israeli spy hired by the Labour Party to help run its social media “listening” campaign, Zionists were hard put to come up with a defence. That didn’t stop them trying though, with one weakly describing Kaplan as an “anti-Netanyahu protester”.

Irrelevant. As their behaviour in Israel this week shows, the Zionist “left” is equally as racist as the Zionist right. Israel’s new President Isaac Herzog is another example of that.

The failed Israeli Labor Party leader now holds the mainly ceremonial role. He’s being praised as a sensible centrist in the West.

But this is the same guy who said that Jews marrying non-Jews is an “actual plague”, was formerly a spy in Israel’s violent cybercrime and blackmail operation Unit 8200, and who ran an openly racist election ad in which his comrades gushed that he “understands the Arab mentality” because he has seen “the Arabs” through “the sight of a rifle”.