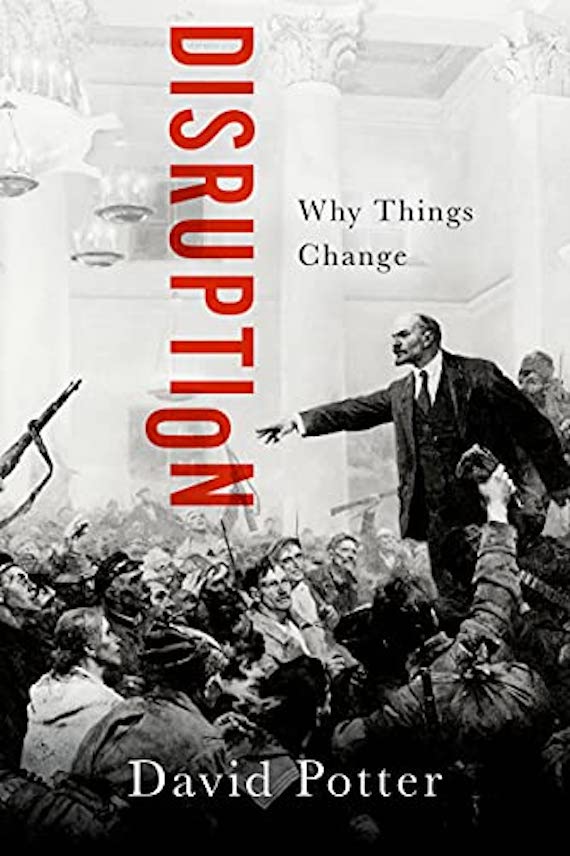 The book is David Potter, Disruption: Why things Change — order from Literati Bookstore.

“How do things change? The question is critical to the historical study of any era but it is also a profoundly important issue today as western democracies find the fundamental tenets of their implicit social contract facing extreme challenges from forces espousing ideas that once flourished only on the outskirts of society. This books argues that radical change always begins with ideas that took shape on the fringes. Throughout time the “mainstream” has been inherently conservative, allowing for incremental change but essentially dedicated to preserving its own power structures as the dominant ideology justifies existing relationships. In this tour of radical change across Western history, David Potter will show how ideologies that develop in opposition or reaction to those supporting the status quo are employed to effect profound changes in political structures that will in turn alter the way that social relations are constructed.

Not all radical groups are the same, and all the groups that the book will explore take advantage of challenges that have already shaken the social order. They take advantage of mistakes that have challenged belief in the competence of existing institutions to be effective. It is the particular combination of an alternative ideological system and a period of community distress that are necessary conditions for radical changes in direction. The historical disruptions chronicled in this book-the rise of Christianity, rise of Islam, Protestant reformations, Age of Revolution (American and French), and Bolshevism and Nazism–will help readers understand when the preconditions exist for radical changes in the social and political order. As Disruption demonstrates, not all radical change follows paths that its original proponents might have predicted. An epilogue helps situate contemporary disruptions, from the rise of Trump and Brexit to the social and political consequences of technological change, in the wider historical forces surveyed by the book.”