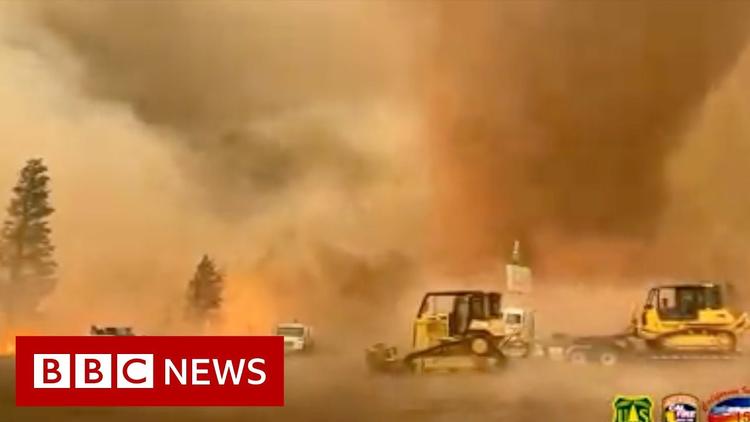 Ann Arbor (Informed Comment) – Gasoline demand in the U.S. rebounded vigorously in the week leading up to the 4th of July, to an average of 9.6 million barrels a day, the highest rate seen since September, 2019, well before the pandemic. This is bad. During the 2020 pandemic year, global carbon dioxide emissions plummeted from 36.6 billion metric tons to a mere 34 billion metric tons. It is the kind of 7% a year reduction we need if we are to avoid the worst effects of the climate emergency. The bad news is that as the post-pandemic economy rebounds, our carbon emissions are shooting right back up. In China, where the government used masking, lockdowns and social distancing to all but defeat the virus by late summer of 2020, carbon dioxide emissions were down less than 2%.

As we blithely go back to our gas-guzzling ways, and as brain-dead state governments like that of North Dakota actively attempt to keep unprofitable coal plants in operation, the earth atmosphere on which we are inflicting our 36 billion metric tons of CO2 (sort of like blowing up myriads of atomic bombs up there) is taking revenge on us with rocketing temperatures.

The heat dome over the Northwest and Canada, which daytime US cable news virtually ignored, killed hundreds of people, even as corporate news obsessed 24/7 about the Surfside apartment building collapse that killed something over 100 people. My heart goes out to the Surfside relatives, I am just saying there was room in the day to cover the much bigger death toll under the heat dome, as well. It is almost as though news corporations own petroleum and coal stocks and don’t want to spook the market.

Exhibit A is the wildfires raging in the US West and in Canada (!). The Tenant Fire in northern California is so hot, dry and and generally extreme that it produced a fire-nado!

Exhibit B is that on Friday it was 130°F in Death Valley, and almost as hot again on Saturday. That repeats the record high of last year this time, and these are likely the hottest anywhere on the earth since records began being kept around 1880. That’s right, we just witnessed the hottest earth. And since we know that the Holocene from around 10,000 before present till now has been cold, that was likely the hottest the earth has been since the beginning of civilization. (There is an old 1913 record of 134°F, but the serious climate scientists and historians of climate such as Michael Mann at Penn State think that one was bogus.)

And now for the piece de resistance. Marine biologist Christopher Harley in Vancouver estimates that the heat dome over the Salish sea in Canada killed a billion seashore marine animals such as mussels and clams.

Harley informs us that mussels and other now-dead marine animals clean the ocean by filtering it for their food. They will likely recover quickly from the heat dome genocide, as long as they don’t face 100 degrees F. temperatures again any time soon. Unfortunately, these global heating events are expected to become more frequent. A heat dome every five years would prevent the filtering animals from recovering, thus ensuring a dirtier ocean with more toxic micro-organisms. The mussel beds also feed a lot of other animals, including birds, so their loss will massively reorganize the coastal eco-system, in ways that are negative not only for those animals but also for human beings.

PBS NewsHour is right that we have to begin planning for massive heat waves for the rest of this century. What I miss is Judy Woodruff climbing up on her desk and shouting at us to stop burning gasoline and coal.

PBS NewsHour: “Heatwaves are becoming more common. Here’s how the U.S. must plan for them”

Of course that is not something individuals can accomplish, though we should do what we can. We need to lobby our representatives heavily to push the panic button and go green.

The Print: “The ‘pressure-cooker-like’ weather phenomenon that killed hundreds in America last month”