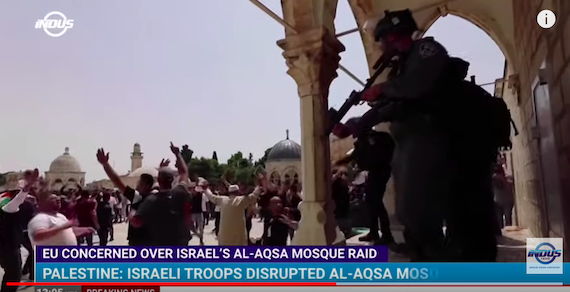 Ann Arbor (Informed Comment) – The Israeli newspaper Arab 48 reports that early on Sunday morning, hundreds of Israeli squatter-settlers stormed the courtyards of Al-Aqsa Mosque from the direction of the Moors Gate, with heavy guard by the Israeli security forces. An attempt was made to exclude Palestinians from the Mosque and its environs.

In fact, Arab 48 says, videos released by by local activists and journalists showed the Israeli police beating Palestinian worshipers, including women, after dawn prayers to drive them away and to allow the Israeli squatter-settlers to come in. Several Palestinians were injured.

Some Palestinian worshipers appear to have insisted on barricading themselves in the mosque and refusing to leave.

Many Israelis believe that the site of the al-Aqsa is the Mount Moriah on which Solomon was believed to have built the first temple, which was destroyed on the 9th of Av, 587 BC, by the Babylonians. It was the commemoration of that loss of the temple in which the Israeli militants were engaged on Sunday. A second Temple was built under Iranian, Achaemenid rule of geographical Palestine, but that one was destroyed by the Romans in 70 AD after a four-year Jewish revolt against the empire.

There isn’t actually much secure archeological evidence of a monumental temple in the time of Solomon, and the biblical account comes from the 500s BC during the Babylonian exile of the Jews, and may contain later exaggerations. In fact, it is not clear that Jerusalem was much inhabited during the period traditionally identified as that of Solomon, late 900s BC., nor that Judaism had then yet emerged as a rite distinct from Canaanite religion.

Some Israelis would like to tear down the al-Aqsa Mosque and replace it with a Third Temple. If that ever happened, the repercussions would be almost unimaginable, as the Muslim world would be infuriated and would not take it lying down. This situation on the Temple Mount is one of the most dangerous flashpoints in global geopolitics, but few analysts understand the dangers.

Israel’s eight-party government includes four members of parliament from the small United Arab List, representing Palestinian-Israelis with a Muslim fundamentalist outlook. In contrast, the current prime minister representing the eight parties, Naftali Bennett, is an extreme-right supporter of the Israeli squatter-settlements on the Palestinian West Bank.

The Al-Quds newspaper reports that the United Arab List issued a condemnation of the Israeli squatters storming the al-Aqsa complex, saying that rights to it are purely Muslim and no one else has any right to it.

The statement held the Israeli government responsible for the violations at al-Aqsa, warning that they could inflame the situation not only in Jerusalem but in the entire area, and could lead to a “devastating religious war.” The squatters, and some members of parliament, performed Jewish religious rituals at the site and sang the Israeli anthem in the courtyard of the mosque.

The United Arab List said that they “will stand as a bulwark against all attempts by extremists to impose a new fait accompli or any kind of partition, temporal and spatial, inside the blessed Al-Aqsa Mosque.”

The United Arab List appears to be afraid that an attempt will be made to carve out a space solely for Jews in the mosque’s environs, as was done at the tomb of Abraham in Hebron. In Israeli-held territory, such “sharing” of holy sites inevitably displaces and restricts Palestinians.

The UAL also sent greetings and congratulations to those Palestinian worshipers who stayed at the mosque and refused to leave despite being set upon by Israeli police. It called on Palestinians in Israel proper and in occupied East Jerusalem to go to the al-Aqsa Mosque for prayers on the Feast of Sacrifice, which begins sundown today (Monday) and will be celebrated through Friday.

Arab 48 says that the presidency of the Palestine Authority warned Sunday against the current dangerous escalation by the Israeli forces of the assault by Israeli squatter-settlers on the courtyard of the al-Aqsa Mosque in Occupied East Jerusalem by protecting them. and locking up the gates of the Old City in the faces of the Palestinian residents.

The statement condemned “The settlers’ serious violations,” considering it “a serious threat to security and stability, and a provocation to the feelings of the Palestinians, holding the Israeli government responsible for this escalation” and adding, “these Israeli provocations pose a challenge to the American demands that have called for preserving the historical status quo in Jerusalem.”

Unlike its predecessor, the Biden administration at least says it is committed to a two-state solution to the Israeli-Palestinian issue, which can only be achieved in the (not very likely) case that Israel withdraws from the Occupied Palestinian Territories of the West Bank and Gaza. Israel would also have to begin observing international law. The Status Quo agreement on the holy sites in Jerusalem, which has developed over centuries of international agreements and government decrees, and was approved in 1949 by the United Nations Conciliation Commission.

The al-Aqsa Mosque complex is a Muslim religious endowment supervised by the government of Jordan. It is key to Palestinian identity, as well, and the coming of the Eid of Sacrifice makes this time particularly holy for worshippers there. Christians and Jews are only supposed to enter the complex as tourists during certain hours. The site is believed by Muslims to have been visited by the Prophet Muhammad himself, and it is the third holiest in Islam after Mecca and Medina. I suggested the Prophet had a vision there in roughly 618 in my recent book,

For the moment, one check on Israeli extremists in going very far toward desecrating the al-Aqsa Mosque is that it would likely cause the Bennett government to fall, since the United Arab List would then withdraw its support.