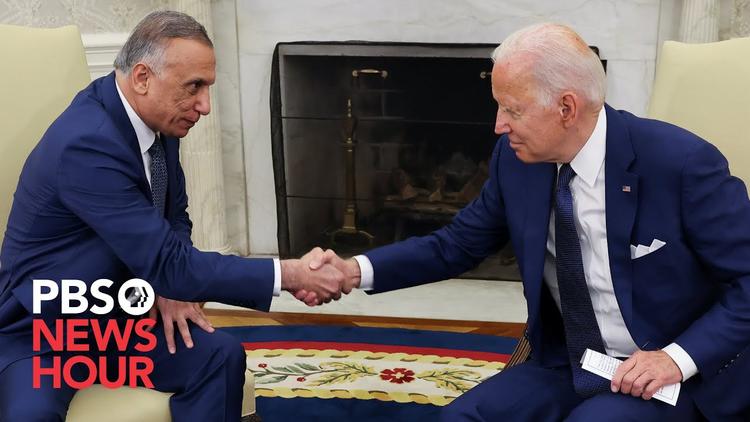 Ann Arbor (Informed Comment) – Mursi Abu Tawq at Al-Zaman (The Times“) in Baghdad reports that President Joe Biden on Monday announced that the US combat mission in Iraq would end by December 31 of this year, beginning a new stage of military cooperation between the US and Iraq.

Biden underlined that US cooperation with the Iraqi government against “terrorism” will continue in the new stage now being discussed. The two leaders discussed the question of whether the Iraqi military is capable of confronting the remaining cells of the ISIL terrorist organization in the north of the country.

Abu Tawq notes that al-Kadhimi is under pressure from pro-Iran Shiite militias, and hence from Tehran itself, to announce a firm schedule for the American withdrawal from Iraq in the run-up to currently scheduled fall parliamentary elections in Iraq.

On the other hand, he says, al-Kadhimi wants the US help with training, logistics and intelligence that Baghdad needs to confront the remaining ISIL cells, and Biden aides indicated that it will be forthcoming. ISIL is thought responsible for an attack on a popular market in Baghdad last week that left 36 dead and 62 wounded, mostly women and children.

He quotes US Secretary of Defense Lloyd Austin as saying that the US troops in Iraq are capable of war-fighting or of fulfilling other functions, it just depends on what the host country wants them to do.

The Biden-Kadhimi announcements were in some ways just for show. It is consequential that the US will cease combat missions in Iraq, but the fact is that US troops haven’t been involved in combat in that country for some time. There are only about 2,500 US military personnel in Iraq any more, and they are already mostly doing training, logistics support and intelligence-gathering.

There were some 6,000 US troops in Iraq on January 1, 2020. On January 3, Donald Trump ignored the advice of the Pentagon and illegally assassinated Iranian General Qasem Soleimani at Baghdad International Airport. The strike also killed Iraqi General Abu Mahdi al-Muhandis, the head of the Brigades of the Party of God, a Shiite militia recognized in 2018 by the Iraqi parliament as part of a sort of National Guard constituted of these “Popular Mobilization Forces.”

Trump and Secretary of State Mike Pompeo lied and said Soleimani had been coming to Iraq to kill Americans. In fact, he came on a civilian airliner and entered on a diplomatic passport. He was there for back channel negotiations through Baghdad with Saudi Arabia aimed at reducing tensions in the Gulf.

The Iraqi government was furious that the US had violated Iraqi sovereignty to kill the two generals. Parliament voted to require the prime minister to arrange for a departure of US troops. This was not, as US politicians falsely characterized it, an “advisory vote.” It was a parliamentary decree that binds the prime minister.

Al-Kadhimi came into office soon thereafter. He had been head of intelligence during the Mosul campaign in 2017 and worked closely with the US Pentagon. He was not happy at the idea of losing US military support, since he knew that ISIL is not gone and could reconstitute itself. He therefore slow-rolled the Iraqi parliament, privately admitting that he was bound by the vote to get the US out.

In spring of 2020 Trump and the Shiite militias engaged in a several tit-for-tat engagements in the course of which two US military personnel and one British lost their lives and several other Coalition troops were injured. US military officers on the ground in Iraq saw these exchanges as ruinous, since they could hardly support one part of the Iraqi military (the regular army) while the US Air Force was bombing another (the Shiite militia “National Guard”). Somehow they got Trump to leave Iraq alone. Al-Kadhimi negotiated the US troop strength down to 5,000 by August of 2020. Then in the late fall of 2020, Trump announced that he was pulling out all but 2,500 troops.

Biden probably won’t reduce that number by much. These troops are simply being re-categorized as trainers. The US isn’t withdrawing from Iraq militarily, though apparently al-Kadhimi hopes that this sleight of hand will be enough to get the Iraqi parliament and the Shiite militias off his back.

The Shiite militias are no longer as popular as they were at the heyday of their fight against ISIL, when the Iraqi regular army had collapsed. Youth protesters have rallied against their arbitrary power, and al-Kadhimi may hope that their star is waning.

Biden is also offering Iraq 500,000 vaccine doses for its fight against the coronavirus pandemic, along with millions in development aid. Iraq is an oil country and shouldn’t need foreign aid, but apparently hundred of billions of dollars in oil sales over the past decade have been squandered or embezzled, and Iraq is poor as a church mouse.

In any case, parliamentary elections are coming this fall, though they could be postponed. Al-Kadhimi could be hoping that the new parliament can be convinced to leave the US trainers in place. The most anti-American political force, the Sairoon Party of Shiite cleric Muqtada al-Sadr, has announced that it will boycott the elections.

Al-Kadhimi has also negotiated with NATO for 4,000 military trainers, and that is always a rubric under which some US troops could stay in the country.

So Monday’s announcement was less earthshaking than a true US military withdrawal from Iraq would be. Moreover, if the Shiite militias go on trying to kill some US troops, eventually, God forbid, they may succeed, which could determine Biden to start back up the combat mission.

For now, the compromise of re-categorization works for both al-Kadhimi and Biden.