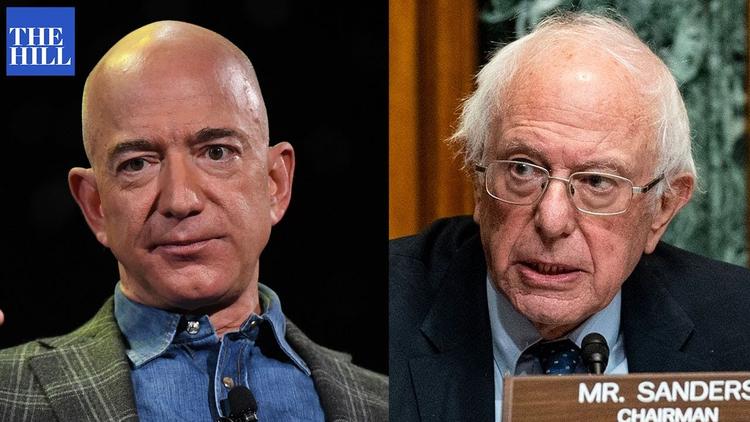 From the very start, the giant retailer’s business strategy has relied on dodging taxes and pocketing public subsidies.

( Inequality.org ) – Shortly after emerging from his 10-minute space flight last week, Jeff Bezos thanked Amazon customers and employees for their primary role in paying for his Blue Origin joyride to the edge of space.

The Amazon founder’s comments quickly elicited scorn from many employees who toil in extreme working conditions for little pay and with bathroom breaks half as long as Bezos’s short rocket ride.

But American taxpayers should be just as roiled for not being mentioned by Bezos at all. Commentators pointed to Bezos’s Blue Origin and Sir Richard Branson’s earlier trip on Virgin Galactic’s Unity spacecraft as being privately funded, but in Bezos’s case that is far from the truth.

Dodging taxes and winning public subsidies have been core to Amazon’s business strategy from the start, when its e-commerce sales eluded state and local sales taxes. Later as the retailer expanded its distribution network, Amazon aggressively demanded passes on paying local property taxes in exchange for the promise of bringing jobs to a community.

And when Amazon finally turned profitable, the company used various tax reduction schemes, including paying executives with stock options and running transactions through off-shore tax havens. This enabled Amazon to become one of a number of highly profitable companies that have contributed next to nothing to the costs of the federal government.

Early on, Amazon located its shipping centers in states without sales taxes. It successfully argued that the transaction occurred where the package left its distribution center, not once it was left at the customer’s front door. This tactic saved Amazon customers billions of dollars, and gave Amazon an enormous competitive advantage over brick-and-mortar stores that had to collect sales taxes.

As Amazon evolved, fast delivery became more important, leading the company to rapidly expand its vast distribution network closer to its customers. Recognizing that this would challenge the underpinnings of its sales tax dodging strategy, Amazon began to demand – and most often receive – lucrative tax breaks and other cash subsidies from communities where Amazon opened facilities and created jobs.

Over the years, Amazon has collected nearly $3.3 billion in 200 different tax subsidy deals with state and local governments, according to Good Jobs First’s Subsidy Tracker database. In many cases, that means when an ambulance is dispatched to an Amazon warehouse to tend to a worker overcome by heat, Amazon has left the cost of such services to other taxpayers to pay. Or when Amazon hires an educated worker, it does so knowing that it often contributed little to pay for local government’s investments in schools.

In the three years between 2018 and 2020, Amazon reported $44.7 billion in U.S. pre-tax profits, but paid just $1.9 billion in U.S. corporate income taxes, according to a 2021 analysis by the Institute on Taxation and Economic Policy (ITEP). These paltry payments gave Amazon an effective tax rate of just 4.3 percent, a fraction of the tax rate paid by typical middle income U.S. families, and only a fifth of the 21 percent statutory U.S. corporate income tax rate.

If Amazon had paid the full 21 percent corporate tax rate over the last three years, the company would have paid $7.2 billion more in federal taxes, money that could have been used to invest in basic research, education, national security, and COVID aid for struggling families and small businesses.

Bezos’s New Shepherd suborbital flight recreated the historic 1961 flight of America’s first astronaut Alan Shepherd. Back then the U.S. corporate tax rate was 48 percent. If Amazon had paid that same rate on its income in the last three years, the company would have paid an additional $19.5 billion in U.S. income taxes.

Amazon is not alone in not paying its fair share in federal taxes. Back in 1961, corporate income taxes comprised 22.1 percent of the federal government’s revenue. Last year, corporations paid just 6.6 percent of Uncle Sam’s bills, despite U.S. corporations being far more profitable than when Alan Shepherd flew aboard Freedom 7.

Bezos claims to have invested about $7.5 billion in Blue Origin to date. U.S. taxpayers have invested many times that amount in Amazon through sales tax loopholes, property tax subsidies, and federal tax avoidance schemes. It is we, the American taxpayers, along with Amazon’s hard-working, underpaid workers, that made this billionaire’s 10-minute thrill ride possible.

Scott Klinger is an Associate Fellow at the Institute for Policy Studies.

The Hill: “Bernie Sanders CALLS OUT Jeff Bezos and Amazon for not paying taxes”