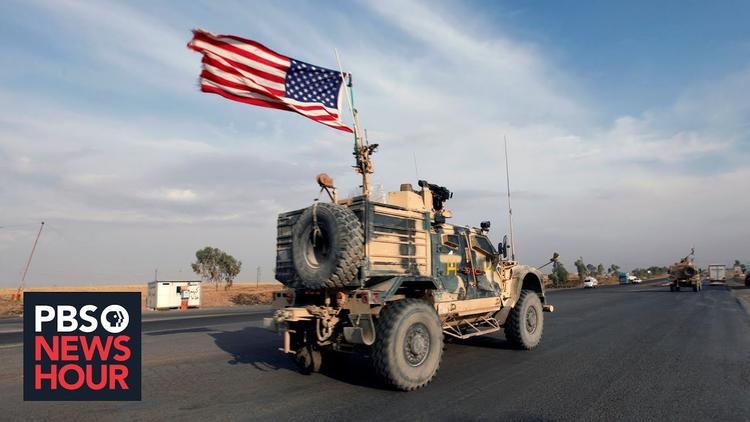 Ann Arbor (Informed Comment) – Richard N. Ojeda, an Army vet and former West Virginia state representative tweeted out an observation that I would like to reinforce:

I don’t remember Donald Trump flying one Kurd to safety. He let Turkey slaughter them. They were our allies that served side by side with our troops. Where is the outrage from the Fox Russian Propaganda Machine??? Biden has safely evacuated over 79,000 Afghans. Let’s take score!

Amid the terminal amnesia of the U.S. media, it is refreshing to see someone remember the circumstances under which Trump pulled out of Syria, as a comparison to Biden’s Afghanistan. Let us just review that situation.

The so-called Islamic State group in Iraq, ISI, had developed in reaction against the US occupation of that country. It was part of the al-Qaeda affiliate, “al-Qaeda in Mesopotamia,” but began styling itself a “state” because it developed the ambition to be more than a terrorist organization, seeking to take and hold territory under the nose of the Americans in Sunni Arab strongholds that resisted the rule of the Shiite-dominated Baghdad government. ISI didn’t have a lot of success in the zeroes of this century.

In 2011, when the Syrian revolution broke out, the government of Baathist strongman Bashar al-Assad decided to repress it with military force. Assad with his sniping and tank barrages maneuvered the youth revolutionaries into picking up a gun to fight back, so that he could brand them violent Sunni fundamentalist terrorists and keep the loyalty of the urban middle classes and the religious minorities.

Amid the fighting, ISI came over from northern Iraq into Syria, attracted by the collapse of the Baath government and army in some parts of the country. It declared itself the Islamic State of Iraq and the Levant or ISIL. It meant all of geographic Greater Syria, including Lebanon, Jordan and Israel-Palestine. It split in 2013 because ISIL was behaving in an opportunistic way, shooting fellow fundamentalist guerrillas in the back and poaching on their territory. Al-Qaeda leader Ayman al-Zawahiri kicked them out of al-Qaeda. ISIL predominated in eastern Syria, taking Raqqa province and making Raqqa city its capital. The rest of al-Qaeda,including Jabhat al-Nusra (The Support Front), predominated in northwest Syria where their remnants still are.

The US foolishly thought that ISIL would be a useful lever against Assad, and didn’t interfere with it. In 2014 it used its east Syria power base to come across and take 40% of Iraq, launching a phony “caliphate” and declaring war on the West, using social media to encourage attacks on Paris and in the U.S.

The Obama administration finally understood the danger of the organization and mobilized to fight it. Obama did not want to put war-fighting troops on the ground but offered training and logistical and air support. In this model, you need troops on the ground willing to fight. They were easy to find in Iraq, where the Kurds and Shiites were angry about ISIL massacres of their members and both the Iraqi national army (which at first collapsed and had to be rebuilt by the US) and Iraqi Shiite militias allied with Qasem Soleimani’s Iranian Revolutionary Guards Corps swung into action against ISIL.

In Syria, Obama couldn’t initially find anyone to fight ISIL. The Sunni Arab fighters wanted to defeat Assad way more than they wanted to go against what were sometimes battlefield allies. The Saudis and other allies likewise wouldn’t take on ISIL. Turkey wanted to fight the Kurds and did not prioritize the struggle against ISIL– in fact it was pouring arms and ammunition into the ranks of the Sunni rebels, some of which probably reached ISIL, and Ankara did not seem to care.

So Obama could ineffectually bomb ISIL in Raqqa until the cows came home to no good effect. You can’t defeat a guerrilla movement from the air.

Then Obama and Secretary of Defense Ash Carter bit the bullet and enlisted Syria’s Kurds in the struggle against ISIL. ISIL hates Kurds, who tend to reject its brand of brutal fundamentalism, and had massacred them. The Syrian Kurds had their own militia, the People’s Protection Units or Yekîneyên Parastina Gel (YPG), the paramilitary of the Democratic Union Party.

The DUP and the YPG had once been communists, but after the fall of the Soviet Union they adopted a cooperativist form of socialism thought up by Brooklyn intellectual Murray Bookchin. The YPG still wore a red star on their uniform in memory of their communist past. So they were strange bedfellows for the Neoliberal, capitalist U.S.

The US added some local Arab tribes to the YPG and called it the Syrian Democratic Forces, but it was basically the YPG.

With US air support and 2,000 embedded US special operations personnel, the Syrian Kurds defeated ISIL, taking Raqqa by mid-October of 2017.

Turkey was furious about the US alliance with the Syrian Kurds, viewing them as terrorists and as a branch of the violent Kurdistan Workers Party (PKK) guerrilla movement against which Turkey’s military fought a dirty war from the 1970s forward.

The US does not view the YPG as at all like the PKK, making a distinction between the Syrian Kurdish Bookchinists and the Turkey-based PKK.

Turkey was fearful that the Syrian Kurds would use their US alliance to arm themselves even better and to consolidate a Kurdish mini-state across northern Syria right on the Turkish border, from which they could spread socialism and Kurdish separatism. There isn’t, however, good evidence of Syrian Kurdish terrorism against Turkey.

In fall of 2019, Donald Trump spoke to Turkish President Tayyip Erdogan and agreed to withdraw US troops from Syria and to allow Turkey to invade the Kurdish regions of northern Syria.

Why Trump did this is still not known, though he once admitted that his Istanbul hotel gave the Turkish government leverage over him.

Trump abruptly pulled out the 2,000 US troops, sending most of them to Iraq but keeping a couple hundred in southeast Syria “for the oil.”

And he stood by as the Turkish military invaded the Kurdish regions of northern Syria, displacing thousands of Kurds. These people who lost their homes were the very ones who had supplied the young men to fight alongside the US and defeat ISIL.

ISIL prisoners being guarded by the Syrian Democratic Forces and the US troops sometimes were able to stage escapes in the chaos. There was a danger of ISIL reasserting itself.

Trump evacuated no Kurdish allies at all, as Mr. Ojeda pointed out. He left them to face the Turkish invasion, or the Syrian Arab Army of Assad, or the continued small ISIL terrorist cells. All this was after they had been the only allies on the ground the US could find to polish off ISIL.

Trump had not warned his allies or even Secretary of Defense James Mattis what he was planning to do, and Mattis resigned over it.

In contrast, Biden had announced a year before when he was campaigning for president that he would get out of Afghanistan, and the peace treaty Trump concluded with the Taliban and Trump’s reduction of US forces to only 2500 in any case left Biden no choice but to get out. Unlike Trump, Biden arranged for the evacuation of 117,000 Afghan allies of the US.

Both withdrawals were chaotic and posed security challenges. But to see pro-Trump Republican politicians grandstanding and calling for Biden’s resignation or even impeachment is a bit rich. None of them wants to remember what their guy did to the Syrian Kurds or the condition in which he left eastern Syria and its ISIL cells.

This was only 2 years ago. It isn’t ancient history. What’s with the amnesia?