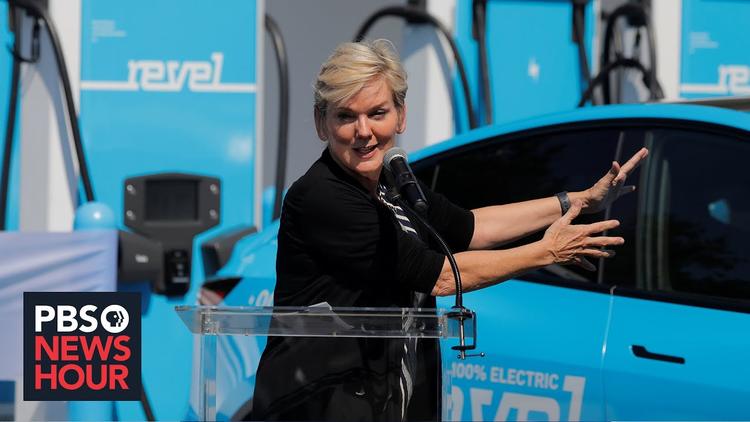 Ann Arbor (Informed Comment) – Although the the $1.2 trillion bipartisan infrastructure bill passed by the senate on Tuesday has been criticized by environmentalists for not doing enough for green energy and the environment, it should be pointed out that it is the largest investment in those issues ever in U.S. history. It is to be hoped that the all-Democrat follow-on bill will have even bigger money in it for the energy transition to renewables, but this bill can be read to promote that transition, as well.

Sean Szymkowski at CNET reports that the bill has substantial monies in it for the promotion of low-carbon transportation.

1. These measures include $7.5 billion for a network of fast electric charging stations for electric vehicles. The White House says,

“U.S. market share of plug-in electric vehicle (EV) sales is only one-third the size of the Chinese EV market. The President believes that must change. The bill invests $7.5 billion to build out the first-ever national network of EV chargers in the United States and is a critical element in the Biden-Harris Administration’s plan to accelerate the adoption of EVs to address the climate crisis and support domestic manufacturing jobs. The bill will provide funding for deployment of EV chargers along highway corridors to facilitate long-distance travel and within communities to provide convenient charging where people live, work, and shop. Federal funding will have a particular focus on rural, disadvantaged, and hard-to-reach communities.”

I think it is true that a lot of people haven’t bought an electric car yet because they have range anxiety. The new generation of electric cars goes 200 to 300 miles on a charge. I personally think this range anxiety business is silly. Some 95% of trips you take in your car are less than 5 miles. If you want to go on a long road trip, rent a plug-in hybrid. For most people it doesn’t even happen that often. In any case, maybe the charging network will allay these fears. I understand that the laws may also have to be changed to let gas stations offer electric vehicle charging, but that probably can’t be done at the federal level.

2. There there is $10 billion to help with the electrification of public transport, including buses and school buses. The White House says that the bill “will replace thousands of transit vehicles, including buses, with clean, zero emission vehicles.” There are only about 100,000 buses licensed in the U.S., and the number of routes is inadequate. Canadian cities have 2 to 5 times more public transit service than the U.S., making for a better, more robust service with much higher rates of ridership. This bill seems to aim at upping the American game in this regard.

The White House adds, “The deal will deliver thousands of electric school buses nationwide, including in rural communities, helping school districts across the country buy clean, American-made, zero emission buses, and replace the yellow school bus fleet for America’s children. The deal invests $5 billion in zero and low-emission school buses, in addition to more than $5 billion in funding for public transit agencies to adopt low- and no-emissions buses.”

3. There is $66 billion for improving and extending Amtrak rail service. Although trains run on fossil fuels, they are tremendously lower-carbon than trucks and automobiles, and this measure is extremely important for the environment.

The more goods and people we can move by rail as opposed to trucks and buses, the less carbon dioxide we will spew out.

Heather Long at WaPo notes that some observers are dismayed that the bill does not include money for high-speed rail of the sort that, for instance, Japan has put in. But maybe that project is something that the all-Democratic bill will address.

4. Long points out that some of the $65 billion set aside for improving the reliability and resiliency of the electrical grid is dedicated to supporting “the development and adaptation of clean energy technology.” Biden has set a goal of a fully green electricity grid by 2035, in only 15 years.

The White House explains, “It upgrades our power infrastructure, including by building thousands of miles of new, resilient transmission lines to facilitate the expansion of renewable energy. It creates a new Grid Deployment Authority, invests in research and development for advanced transmission and electricity distribution technologies, and promotes smart grid technologies that deliver flexibility and resilience.”

Transmission lines are a big deal. China, for instance, has run into bottlenecks where it has built out wind farms far from the cities that would use them, and then lacked sufficient wires capable of delivering the electricity to those cities.

Unfortunately, the bill appears to have language in it, no doubt to appease the Republicans and Blue Dog Democrats, speaking of carbon capture and nuclear energy. Carbon capture is vaporware. It doesn’t exist and would be dangerous if it did. Nuclear energy has some virtues given our climate crisis and I’m not absolutely against it, but it is not as low-carbon as it looks, and is an opportunity cost– we should instead rapidly build out wind, solar and battery capacity.

5. The Bill puts $50 billion into preparing for the increasingly damaging effects of the climate crisis, including droughts and floods. The White House points out that in 2020 alone, the US was confronted with 22 extreme weather disasters caused by the climate crisis at a cost of $100 billion. It adds,

“People of color are more likely to live in areas most vulnerable to flooding and other climate change-related weather events. The deal makes our communities safer and our infrastructure more resilient to the impacts of climate change and cyber attacks, with an investment of roughly $50 billion. This includes funds to protect against droughts and floods, in addition to a major investment in weatherization. The bill is the largest investment in the resilience of physical and natural systems in American history.”

Climate crisis mitigation and proactive government action to deal with its damage will have to be a big part of public planning going forward, and this bill begins to take this crucial issue on. It occurs to me that if we actually have dealing with climate-induced erosion, flooding and wildfires in the budget every year, that will be an impetus for fiscal conservatives in Congress to take this damage seriously and to try to reduce it. You would reduce it with wind, solar, battery.