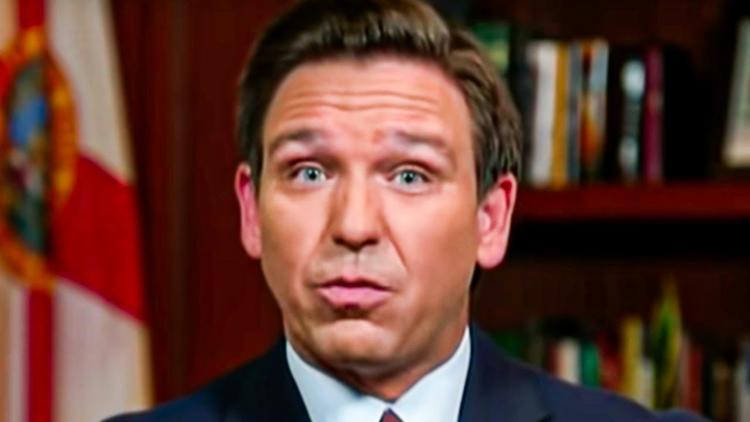 Ann Arbor (Informed Comment) – Jeffrey S. Solocheck at the Miami Herald reports that Florida governor Ron DeSantis on Friday issued a royal decree forbidding school districts to require that pupils wear a mask and threatening to cut funding from any that defied him.

DeSantis has also banned Florida municipalities from putting in renewed mitigation measures, and forbade businesses to require customers to be vaccinated. DeSantis is nearly as deadly as the virus itself.

Florida saw a one-day total of new cases of 21,683 on Friday, the highest since the coronavirus first emerged in March, 2020, according to Tori B. Powell at CBS. Cases are up 50% week on week.

After some of his campaign supporters adopted the slogan “don’t Fauci my Florida,” he has finally come around to urging people to get vaccinated, but he hasn’t paid that cause more than tepid lip service that is too little too late. His vaccine roll-out has favored the wealthy and put workers and the poor last. The vast majority of the unvaccinated in the United States are hard line Republicans. Only 8% of Democrats say they won’t get vaccinated. In contrast, 40% of Republicans are vaccine rejecters.

Factcheck.org says that in the past week, Florida saw 94,520 COVID-19 cases, which was the highest total in the entire United States.

On last Wednesday alone, nearly 9,000 Floridians had to go to hospital with Covid. Unlike in the previous, Alpha wave of the disease, these victims tend not to be seniors but persons 20-49 years of age. Almost all, 99%, are not vaccinated.

Some 41% of Floridians are still not vaccinated.

Suzette Porter at Tampa Bay Newspapers reports that “According to the CDC, Florida added the second highest number of cumulative cases per 100,000 in the last seven days at 481, trailing behind Louisiana at No. 1 with 573. Arkansas was third with 405.”

No vaccine against SARS-CoV-2 has been approved for children under 12. The Delta variant is ten times as transmissible as the original alpha variant, and nearly twice as likely to put you in the hospital if you are not vaccinated and you come down with it. Infected individuals carry a thousand times the viral load in their nasal passages as with the alpha variant.

Daniella Silva and Erika Edwards at NBC report that some 4 million children have been diagnosed with Covid-19 in the US and several hundred have died. While most who came down with the alpha variant had no or only mild symptoms, it is too soon to know whether the Delta variant poses an added measure of risk. Children are contracting it, and some are developing “long Covid,” with serious symptoms that last for months.

Moreover, rapid transmission of the Delta variant among children poses a public health crisis in states where vaccination rates are low, since they will transmit it to unvaccinated relatives and neighbors.

Until a vaccine for children is approved, likely in mid-winter, the safest approach is for children to wear masks while at school.

DeSantis wants to be president, and his prohibition of municipal mitigation measures and of masks for children in school is intended to make him popular with the Republican base, including its Trumpian majority. Apparently the Republican Party has gone from objecting to government interference in the economy to imposing unhealthy policies on retailers.

Many Florida educationists are arguing that the Florida state constitution does not grant DeSantis the authority to tell school districts whether they can adopt a mask policy. So much for Republicans as the party of limited government. DeSantis is acting like a king, issuing royal decrees with no constitutional standing and dictating to local government how to behave. There is a malignancy in his actions, which are destined to kill people, and as a high-functioning sociopath, he not only does not care but actually probably is incapable of doing so.

DeSantis used to boast that his policies of ignoring Covid-19 and then interfering in mitigation measures taken against it by mayors and businesses had been shown to be a success. I wouldn’t call the kind of statistics we are seeing out of Florida a success, exactly. Indeed, you might even call it an abject failure.

Ring of Fire: “Doctors Beg Ron DeSantis To Do Something To Slow COVID Spread In Florida”