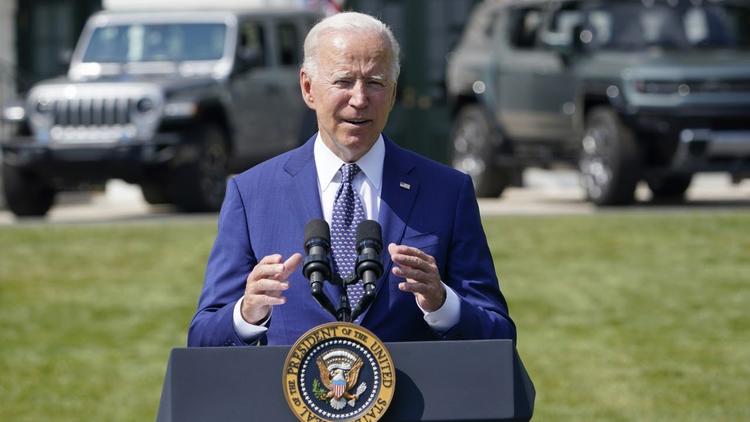 Ann Arbor (Informed Comment) – Joe Biden is good at multi-tasking. His announcement on Thursday that he wants 50% of all cars sold in the US in 2030 to be electric or plugin hybrids will appeal to many environmentalists, or at least the electric part will.

But the transcript at rev.com/ demonstrates that President Biden had other agendas, too. Biden first brought on Bernie Ricke, president of UAW Local 600 in Dearborn, Michigan, the site of the Rouge River Ford plant. He wanted to underline that the electric cars of America’s future would be built in America by unionized workers.

Elon Musk’s Tesla, famous for its anti-union pressures, was pointedly not invited, even though it makes the best-selling EV in the US.

Camila Domonoske and Asma Khalid at NPR report that Ford, General Motors, Stellantis (maker of Jeep, Ram and Chrysler brands), BMW, Honda, Volkswagen and Volvo all supported Biden’s 2030 goal. Actually some of them already plan to exceed it. Volvo intends for all its vehicles to be electric by 2030.

Although Biden only ever partially bought into the progressive Green New Deal, his emphasis on union-built EVs overlaps with GND goals of using the greening of transportation and the grid to lift up workers.

Biden put his project in the terms of global economic competition, highlighting China. While some of the New Cold War rhetoric of the Biden administration about China is unhelpful when it comes to geopolitics, I think Biden is right that the US is facing economic peril if it does not up its green energy game. A race, not an arms race but a Green energy and transportation race, between Washington and Beijing would benefit us all. Of course, on some things the two will need to cooperate, which is another reason to avoid heated Cold War rhetoric.

“As I’ve said before, we’re in competition with China and many other nations for the 21st century. To win we’re going to have to make sure the future will be made in America. Back in May I toured the Ford plant, as I mentioned, a state-of-the-art facility in Dearborn where the UAW workers like Bernie are building the first ever all electric Ford 150. And as I said, the best part is I got to drive it. It’s incredible. Just like the other vehicles that are behind me today. There a vision of the future that is now beginning to happen. A future of the automobile industry that is electric. Battery electric, plug-in, hybrid electric, fuel cell electric, it’s electric and there’s no turning back.”

Biden is correct to point to the pick-up that the better electric vehicles have. People are always asking me whether they can merge into traffic on the highway. Those suckers are like sports cars.

I’d just demur from the plug-in hybrid praise. Those models only save 40% of carbon emissions over gasoline cars, whereas pure electric are more like 80%. On the other hand, US consumers like the idea of having a gasoline back-up if the battery runs low. It is just a security blanket. Something like 95% of our auto trips are 5 miles or less, and that doesn’t challenge your battery. If you want to do a long road trip, rent a car or go by train. Plus some of the new generation of EVs will go 300 miles on a charge.

Biden returned to the issue of competition:

“The question is whether we’ll lead or fall behind in the race for the future. It’s whether we’ll build these vehicles and the batteries that got them to where they are in the United States here in the United States or we’re going to have to rely on other countries for those batteries. Whether or not the job to build these vehicles and batteries are good paying union jobs, jobs with benefits, jobs that’s going to sustain continued growth of the middle class. They have to be, they have to be made here in America. Right now China’s leading the race. One of the largest and fastest growing electric vehicle markets in the world.”

If Biden can kickstart electric vehicle R&D in the US with big infusions of federal cash, there is every prospect of the cost and range of EVs plummeting in only a few years, opening the way for the US to compete well in the international market.

Because the U.S. is caught in the death grip of Big Oil (a.k.a. Satan), which is buying mass Facebook ads in a desperate bid to slow the rush to electric vehicles, we don’t realize how backward we look to the rest of the world. European regulation on carbon emissions is much more stringent than that of the US. It is one reason all those auto companies are OK with Biden’s goal of 50% EVs by 2030– most of them had been forced to plan for that kind of goal anyway by European Union regulations.

“And a key part electric vehicle to state obvious is the battery. Right now, 80% of the manufacturing capacity for these batteries is done in China. And here’s the deal, it’s not China’s battery technology that’s much more than anyone else’s. Remember our national labs in America, our universities, our automakers, led in the development of this technology. We lead in developing this technology, and there’s no reason why we can’t reclaim that leadership and lead again. But we just have to move, we have to move fast.”

Biden got some criticism from environmentalists that the 2030 goal is voluntary and aspirational. But what is not voluntary is that Biden will increase auto emission standards.

“The Environmental Protection Agency and Department of Transportation also announced Thursday they are reversing a Trump-era rollback of fuel emissions standards. The newly proposed standards from the agencies for light-duty vehicles will be 10% more stringent than the Trump-era rules for 2023 model year vehicles, then becoming 5% more stringent each year though 2026 model year vehicles.”

The federal government owns around 700,000 vehicles, and Biden wants to require them to be electric going forward, which in itself would be a huge boost for the industry.

Although greening the transportation system isn’t as sexy on the face of it as going to the moon, it will be far more consequential for the fate of humanity. Historians may look back on today’s speech as Biden’s equivalent of JFK’s speech pledging to go to the moon within a decade.