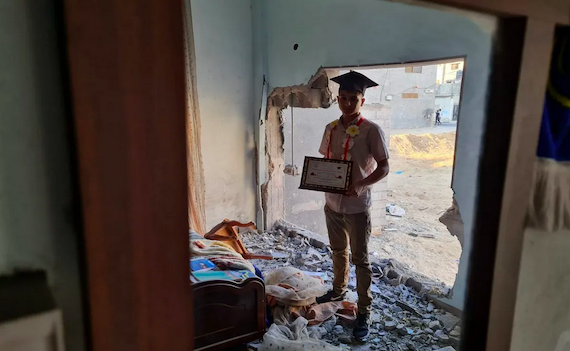 ( Middle East Monitor) – As Palestinian high school students celebrate their success in the Tawjihi exams and plan for the future, those in Gaza are still trying to rebuild their lives after Israel’s brutal bombing campaign in May.

The Tawjihi exams were held just one month after the ceasefire was announced, which brought 11 days of Israeli bombing to an end. Tens of thousands of Palestinians were forced to flee from their homes during the assault, leaving all their belongings behind. Some have been able to return, while others found their belongings buried under the rubble.

However, emerging from the depths of this tragedy, we find impressive and inspiring stories of success.

Wafaa Amjad Musa Abu Al-Naga from Khan Younis was a student at Umm Salamah Secondary School for Girls in the southern Gaza Strip. This week she discovered that she attained 99.1 per cent in her Tawjihi exams.

Her description of the days before the exam make her feat ever more striking.

“Our house was threatened by Israeli bombing. When we left, I could not take my school books. Two days before it was bombed, I risked my life and went to the house despite the threat of the occupation and took all my books,” she explains.

The atmosphere of displacement from one house to another made me unable to study for nearly a month.

“After the trouble of the end of the war on Gaza, we were able to settle in a house a week before my exams. The time I had to study was very limited, so I relied on the summaries and questions from here and there,” she adds.

With God’s help, her family were able to create the appropriate conditions for her to study while they were in their new accomodation, she explains.

Some 82,924 students sat the Tawjihi exams this year, the Palestinian Ministry of Education has said, of whom 59,182 passed, a passing rate of 71.37 per cent.

Amongst them was Abd Al-Rahman Ayman Muhareb Habib who found himself in the middle of the bombardment, breathing in smoke and dust. Despite this and the constant shelling and aggression by the occupation’s warplanes on Gaza City, he achieved a 99 per cent average in the exams.

Though he excelled at his studies, Abd Al-Rahman ‘s medical condition worsened with the rubble surrounding his building affecting his lung disease.

Palestinian student Yehya Al-Saqqa from Khan Yunis stands in his destroyed bedroom after he attained 94% in the Tawjihi exams. Al-Saqqa’s home was partially destroyed by the Israeli bombing campaign on Gaz in May 2021, just one month before he sat the exams.

Palestinian student Yehya Al-Saqqa from Khan Yunis stands in his destroyed bedroom after he attained 94% in the Tawjihi exams. Al-Saqqa’s home was partially destroyed by the Israeli bombing campaign on Gaz in May 2021, just one month before he sat the exams.

For these students, they were the lucky ones, they survived the bombing, sat their exams and excelled. Tawfeeq Abu Alouf wasn’t so lucky, he and his entire family were murdered in an Israeli strike leaving only his brother Amjad behind. The family perished in what Palestinians refer to as the Al-Wehda Street Massacre, when more than 45 Palestinians were killed.

Amjad tells MEMO: “Tawfeeq was in his room studying science minutes before the house was hit.”

Students now face the challenge of enrolling in universities, this will not just be determined by their grades, but by their ability to afford the fees that come with this new phase.

Israel didn’t only target homes during its latest bombing campaign, it hit health centres and factories, leaving hundreds without jobs or an income.

Amna Khaled’s dreams of going to university were levelled as soon as the Israeli missile hit the factory where her father worked.

that “My father worked in a factory in the industrial estate east of Gaza for many year, but the occupation warplanes bombed it … this means that I will not be able to get in in the university,” she tells MEMO.

Some 3,000 factory workers were laid off as a result of the strikes. The affects of the brutal air raids campaign have still not fully come to light.