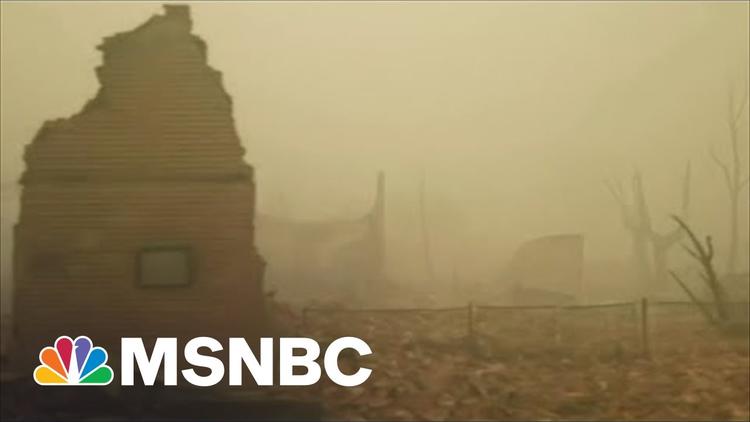 By Bart Johnson and David Hulse | –

A wildfire burning in hot, dry mountain forest swept through the Gold Rush town of Greenville, California, on Aug. 4, reducing neighborhoods and the historic downtown to charred rubble. Hours earlier, the sheriff had warned Greenville’s remaining residents to get out immediately as strong, gusty winds drove the Dixie Fire toward town. At the same time, firefighters were also trying to protect two other communities – all not far from where the deadly Camp Fire destroyed the town of Paradise in 2018.

This kind of trauma is becoming familiar, from loss of homes to the obliteration of entire towns. Fear of what the future holds in a changing climate lends uncertainty to people’s daily lives. They want to know how to protect their homes, their families, their communities. But they also want to protect core values they cherish – good places to raise their children, freedom to choose their lifestyle, a sense of place in nature and belonging.

How can people prepare for a future that’s unlike anything their communities have ever experienced?

The emergence of extreme fires in recent years and the resulting devastation shows that communities need better means to anticipate mounting dangers, and underscores how settlement patterns, land management and lifestyles will have to change to prevent even larger catastrophes. Our research team of landscape architects, ecologists, social scientists and computer scientists has been exploring and testing strategies to help.

Because climate change is contributing to unprecedented extreme fire weather, we used simulation modeling to explore and test how forest management and rural development could reduce or amplify wildfire risks in coming decades.

To do this, we created a computer version of the rural landscape around Eugene-Springfield, a midsize metropolitan area in Oregon’s Willamette Valley with a rapidly expanding population. Our simulations played out in carefully mapped representations of that landscape beginning in 2007, including its vegetation, property boundaries and the type of landowner managing each parcel, such as farmers, foresters or rural residents who moved to the countryside from the city.

For each of 50 simulated years, as climate models generated fire weather and altered the vegetation, each landowner chose actions such as removing hazardous fuels like small trees and underbrush, restoring fire-adapted ecosystems, growing crops, building homes or protecting homes with landscaping and building materials recommended by the National Fire Protection Association’s Firewise program.

Over time, the simulated landowners could respond to emerging threats while protecting valued crops, amenities, lifestyles and ecosystems.

We tested different strategies under two climate models in 600 simulated futures. Under one climate model, wildfire behavior remained much the same as in the recent past while the number of fires grew because of increased human ignitions as the population increased. Under the other, more extreme climate model, wildfires larger than any experienced in the Willamette Valley’s recent past could erupt without warning, threatening homes even as landowners’ vegetation management reduced the fires’ spread.

It turned out that those worst-case projections were dwarfed by the wildfires in 2020 just outside our study area.

Three lessons for surviving the future

Here are three key lessons we’re learning from our research on how people might reliably reduce their losses in a future that could bring more fires, unpredictable larger fires, or both.

1) Prepare for uncertainty: In a simulated world with extreme, unpredictable wildfires, 10 times more homes were threatened in our study area than in identical rural development and forest management scenarios under less extreme climate impacts. In our worst-case scenario – in which rural development expands without constraint and the forests aren’t thinned by people or allowed to burn naturally – over 30 times more homes were threatened than under conditions with less rural population growth and more management.

The good news was that when 30% of the burnable landscape was actively managed to reduce fire risk with forest-thinning techniques and grassland restoration, the threat to homes fell by nearly half in the world of extreme wildfires.

In our study area, restoring imperiled native grasslands with scattered trees could do the best job of reducing risk to individual homes by creating “safe” places, where the fire can’t spread fast through the tree canopy and firefighters can battle it, under even extreme wildfire conditions. One such fire exploded out of nowhere under the less-extreme climate model, threatening over 900 homes. Two-thirds of homes in restored grasslands were protected by Firewise practices. Density thinning was only half as effective because of the difficulties of protecting homes in a forest. But the biggest challenge was that the high costs of thinning kept most forest landowners from maintaining treatments over time. As a result, high-severity fire consumed unmanaged forests, threatening 85% of homes there.

Grasslands pose a two-edged sword if not carefully managed – under extreme fire weather they could foster fast-spreading fire corridors that leave homes in nearby forests exposed to greater risk.

3) Manage rural development. Dealing with the often-divisive issue of where and how people build new homes is crucial when it comes to wildfire risk. Oregon is renowned for statewide policies that constrain urban sprawl.

When we tested scenarios with more relaxed rules, we found that adding many new rural homes increased the average risk per home. Under these relaxed policies, sites in less risky areas were quickly developed and housing shifted to steeper, forested terrain at greater risk of severe fires. That can compound risk by putting more homes in harm’s way and increasing the potential for vehicles and power lines to ignite fires.

An advantage of simulation modeling is that it allows scientists, policymakers and citizens to investigate things we can’t easily test in the real world. We can explore prospective solutions, identify new problems they create and address them and run the simulations again.

In the real world, there is only one chance to get it right. People need to be able to identify reliable, adaptive approaches that can be implemented in sufficient time and in the right places before catastrophes happen. As carpenters say, “Measure twice, cut once.”

So what should people in fire-prone areas do?

Western wildfires are getting more extreme, but in many cases landowners and communities may be able to dramatically reduce the damage.

Our worst-case scenario – high climate impacts, large numbers of new rural homes and no fuels management – led to an order of magnitude greater risk to homes in our study area over the next 50 years. But by consolidating new development in cities and clustered rural housing, the risk dropped by half. And combining compact development with management of burnable vegetation reduced it by nearly 75%.

On a smaller scale, everyone can take basic steps to help protect their homes. Here are a few tips:

The results of our simulations emphasize the power and consequences of today’s decisions on tomorrow’s risk.