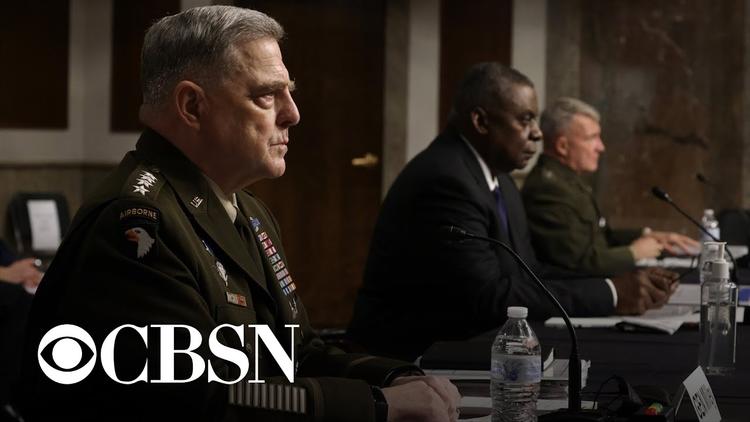 Ann Arbor (Informed Comment) – The Senate Hearing on the collapse of Afghanistan, at which the top US generals testified, underlined that actions taken by the Trump administration had a significant impact on undermining the Ashraf Ghani government and the Afghanistan National Army.

Secretary of Defense Lloyd Austin admitted that, “The fact that the Afghan army that we and our partners trained simply melted away, in many cases, without firing a shot, took us all by surprise, and it would be dishonest to claim otherwise.”

Neither he nor the officer corps in general expected the army to virtually disappear in a matter of weeks. Some of these officers had served significant time in Afghanistan and knew the country and their Afghan counterparts well. They nevertheless were taken by surprise.

Austin is saying that when Donald Trump ordered peace negotiations with the Taliban and ultimately concluded a treaty with them in February, 2020, the Afghanistan National Army commanders saw the writing on the wall. The United States was leaving, and leaving them in the lurch.

The Doha agreement specified that the US would leave Afghanistan entirely by May 1, 2021.

By the way, the Trump administration dickered directly with the Taliban, and cut the Kabul government out of the deal, much to the chagrin of Ghani and his generals.

In response, Afghan commanders started doing side deals with the Taliban, on whom Trump was obviously betting, since they were the ones he was negotiating with.

Those side deals, Austin says, had a “snowball effect.” More and more commanders secretly made them over the past eighteen months. They felt they had no choice.

Trump’s deal with the Taliban had demoralized them.

Chairman of the Joint Chiefs of Staff Mark Milley pointed out that, moreover, neither the Trump nor the Biden draw down of US troops came out of nowhere. It was a decade-long process:

If the US news corporations had been doing their job instead of purveying infotainment for easy advertising dollars, Afghanistan news would not come as a shock to the public.

Milley admitted that the Taliban upheld their agreement not to attack US troops after the peace treaty was signed in February, 2020, but complained that they had not fulfilled any of their other commitments. He therefore recommended keeping 2500 to 4500 US troops in Afghanistan indefinitely.

What he did not admit is that since Trump gained a Taliban pledge not to attack US troops in return for vowing to leave by May 1, 2021, any attempt to keep US troops in the country would result in the Taliban targeting them, and the outbreak of hostilities all over again.

Milley said that shortly after he sent his recommendation to keep troops in country to Secretary of Defense Mark Esper,

“Two days later on 11, November, 2020, I received an unclassified signed order directing the United States military to withdraw all forces from Afghanistan no later than 15, January, 2021.”

That is, Trump tried his damnedest to do in January what Biden did in August. In some ways, it was Biden’s bad political luck that Trump had a failure of nerve and in the end kept 2500 troops in the country until, he said, May 1 — kicking the can down the road and leaving Biden holding the bag.

All those partisan Trumpists who raked Biden over the coals for ordering a complete withdrawal in August are revealed to have feet of clay. Their golden calf had intended to do exactly the same thing.