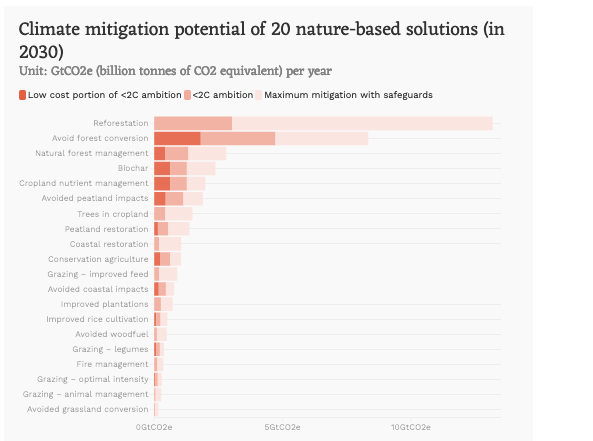 Nature-based solutions can bring together action on climate change and ecosystem protection, but cutting emissions must be top priority

( China Dialogue) – The concept of nature-based solutions took root in China in 2019. Now it has been included in official documents from the Ministry of Ecology and Environment (MEE) and the Ministry of Natural Resources (MNR), bringing the idea greater visibility in policy. But urgent issues remain to be resolved. These include a lack of quantitative research, a narrow understanding of the concept, and the need for incentive policies. And although nature-based solutions (NbS) offer strong measures to tackle both climate change and biodiversity loss, they should not be used to mitigate climate change at the expense of big emissions cuts.

What are nature-based solutions?

NbS are actions to protect, restore and manage ecosystems in ways that also benefit humans. Such benefits might be climate change mitigation, economic development, food security, improved health or resilience to natural disasters.

The concept has been attracting international attention for a while. In a 2008 report, the World Bank said NbS could help both with mitigation and adaptation to climate change, while also protecting biodiversity and improving sustainable livelihoods. The following year, the International Union for Conservation of Nature (IUCN) said in a proposal to the COP15 climate talks that NbS should be promoted “as an integral part of broader adaptation and mitigation plans and strategies.”

Then, in 2016, the IUCN offered systematic definitions of NbS concepts and principles. It described NbS as including the conservation, restoration and sustainable management of natural and artificial ecosystems, in order to respond to various social challenges while improving human welfare and biodiversity. In the years since, the European Commission, Rainforest Alliance and Nature Conservancy have all put forward definitions of NbS more specific to the fields they work in. Generally speaking, the IUCN’s definition is broader and more widely applicable.

The year before last seems to have been a turning point. In 2019, the UN climate summit listed NbS as one of nine action areas, and China and New Zealand were to lead a new coalition on it. Following that, NbS gained more attention in China’s climate change and conservation fields – from policymakers, academics and NGOs – as valuable tools to combat climate change. In September 2020, nature-based solutions were included in guidelines on ecosystem restoration published jointly by the MEE, MNR and Ministry of Finance. The Nature Conservancy followed this up in March this year with a book on NbS in Chinese.

In western China, thanks to the restoration of the Loess Plateau, more than 2.5 million people have improved their economic outlook, according to the World Bank. Incomes have doubled, food supplies have been secured and the degraded landscape has been revitalised. (Image: momo / Flickr CC BY 2.0)

Some large multinationals have, based on their carbon neutrality and social responsibility commitments, also become NbS champions, attracted by the environmental, social and economic advantages of the approach.

The sudden popularity of NbS after the New York climate conference in 2019 created a misunderstanding that they are only about solving climate change. In fact, NbS can help meet multiple challenges. Within the climate context, NbS are often referred to as natural climate solutions. These can be achieved through the protection, restoration and sustainable development of natural and artificial ecosystems to fix carbon and prevent carbon emissions from land use.

Unlike traditional climate solutions which involve cutting energy use and reducing emissions, NbS can have other beneficial effects, such as protecting biodiversity, conserving water sources and looking after the soil. That all improves adaptability to climate change. The mainstream view, then, is that it would be hard to overuse NbS, as it is both mitigation and adaptation in one package.

Research by the Resilience Centre at Stockholm University described NbS as a “no-regret” option, meaning that “the outcomes are fundamental for the maintenance of the economy and livelihoods in any scenario.”

Fire management is one of the actions proposed by researchers that help mitigate climate change, whilst protecting both biodiversity and the livelihoods of local communities (Image © Greenpeace / Flavio Cannalonga)

In January, the MEE published guidance on coordinating and strengthening climate action and environmental protection, saying that attention should be given to nature-based solutions during action to mitigate and adapt to climate change. The multiple benefits of NbS have made it crucial to coordinated action on the climate and biodiversity.

In 2017, The Nature Conservancy and 15 other organisations published a paper on natural climate solutions in the Proceedings of the National Academy of Sciences of the United States of America. They reviewed 20 actions towards climate mitigation that would see forestry, farmland, grasslands and wetlands protected, restored and better managed. The paper predicted that by 2030, the actions could contribute 37% of the climate mitigation needed to limit warming to 2C. Moreover, the researchers found this would be an affordable and practical option: around one-sixth of this mitigation would cost no more than US$10 per tonne of CO2 equivalent (tCO2e) and half of it would cost less than U$100. The paper estimated that by 2030 every tCO2e released will cause US$100 of social harm – meaning around half of the NbS climate action could be termed cost-effective.

To better understand the global and national potential of NbS in mitigating climate change, Nature4Climate and the Nature Conservancy developed the Natural Climate Solutions World Atlas.

According to the atlas, the 15 NbS pathways covered have the potential to reduce China’s annual emissions by 2.223 billion tCO2e, or one-fifth of the 11.7 billion tonnes of greenhouse gases the country emitted in 2018. Of those potential reductions, 46% cost less than US$100 per tonne. The three options which have the greatest potential and cost under US$100 a tonne are: reforestation, cropland nutrient management and avoidance of forest conversion. 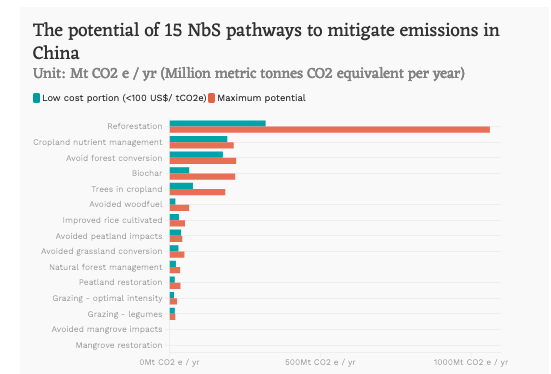 In September last year, China committed to peaking its carbon emissions by 2030, and reaching carbon neutrality by 2060. Carbon neutrality means all emissions are offset by negative emissions – that is, net emissions are zero. Currently, the mainstream view in Chinese climate policy is that alongside emissions cuts, carbon removal technologies, such as carbon capture, utilisation and storage, and direct air capture, will be needed to create more negative emissions, as well as NbS to fix carbon in forests, wetlands, agricultural land and coastal belts.

There is no doubt NbS have a major role to play in achieving carbon neutrality. But a lack of research material and data means research findings lack representativeness and detail. There is an urgent need for quantitative research into the potential and synergies of NbS at the national and regional level, in order to provide data for policy decisions and leverage private investment.

RecommendedLessons from the rush to reforest

Since 2019, The Nature Conservancy, Chinese Academy of Sciences, Chinese Academy of Forestry Science, and Chinese Academy of Agricultural Sciences have been working on in-depth research into three major NbS options: reforestation, natural forest management and cropland nutrient management. This research has involved modelling and meta-analysis based on observational data, and the results are expected this year. Once they come in, the potential and benefits of NbS in cropland, grasslands, wetlands and coastal zones will also be analysed.

Over 90% of the Nationally Determined Contributions (NDC) which countries submitted under the Paris Agreement include NbS, with more than half of those covering forestry. China’s own 2015 NDC included a quantified target for forest volume, and that target was raised at the Climate Ambition Summit last December.

According to the Outline of the 14th Five Year Plan, 24.1% of China will be covered in forest by 2025. Planting trees can fix huge amounts of carbon, and brings many other benefits. But this means many think NbS simply means creating forests. 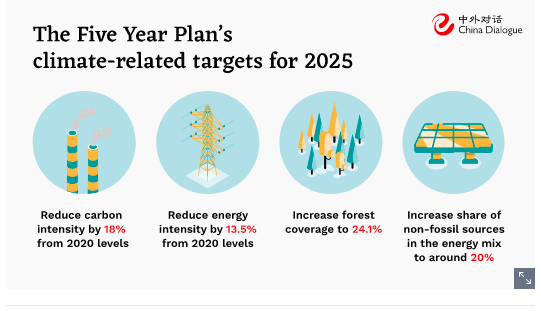 While it is true that forests have a crucial role to play in mitigating climate change, there is much more to NbS. Wetland, grassland and cropland ecologies all have unique and essential ecological, social and economic functions, which cannot be replaced by forestry alone. Grasslands and wetlands should not simply be taken over to increase forest coverage – forests should only be created after a scientific planning process.

In any case, NbS aren’t just about fixing carbon. They can also cut emissions. Globally, up to 19% of emissions of the two major non-CO2 greenhouse gases, methane and nitrous oxide, comes from arable and livestock farming. There is huge potential to reduce those emissions through cropland nutrient management and improved paddy field management.

Improved rice cultivation is one of the nature-based solutions that can help reduce emissions in China (Image: Arian Zwegers / flickr, CC BY 2.0)

Currently, China’s NDC only provides quantitative targets for forestry goals. But if the country is to exploit all NbS potential and have all sectors working towards this aim, it should put figures on its goals for other areas – based, always, on scientific research.

The full and successful implementation of NbS will need effective incentive mechanisms. Wang Yi, member of the Standing Committee of the National People’s Congress, has noted that management of the forest, wetland, grassland, cropland, ocean and urban functions important for NbS is currently divided across the Ministry of Natural Resources, Ministry of Agriculture and the Ministry of Ecology and Environment. An integrated coordination mechanism is lacking. There is an urgent need for China to establish such a mechanism within its environmental governance framework, with clear responsibilities and processes, and beneficial incentives. That mechanism will drive cooperation across departments, and get more stakeholders involved in governance.

Stick to your roots

Internationally, there has been criticism that too much emphasis on NbS could divert attention away from sources of greenhouse gases and the transition to renewable energy. While NbS has a crucial role to play in achieving peak carbon and carbon neutrality, it is not a replacement for other solutions. Most urgently, we need a full energy transition in manufacturing, power generation, farming and transportation, with the gradual elimination of fossil fuels and research and innovation in clean energy tech. We must be extremely careful that the rush to carbon neutrality does not result in boosting NbS and overlooking the need to cut emissions. For example, some fossil fuel companies have in recent years committed large funds to NbS but fall short in cutting emissions in their own operations.

Critics argue that too much emphasis on NbS could divert attention from the urgent need to use clean energy to achieve carbon neutrality (Image: Eric Sonstroem / Flickr, CC BY 2.0)

As the climate crisis worsens, NbS offer a no-regret route to tackling climate change. But the decisions we make during the systematic process of change must be backed by science, by policy and by broad participation.

Dr. Jin Tong is the science director at The Nature Conservancy China. She has nearly 20 years of research and conservation experience, specialising in endangered species protection and the planning and management of protected areas.

Dr. Zhang Xiaoquan is chief science officer at The Nature Conservancy China and an expert in climate change and forestry carbon sequestration.