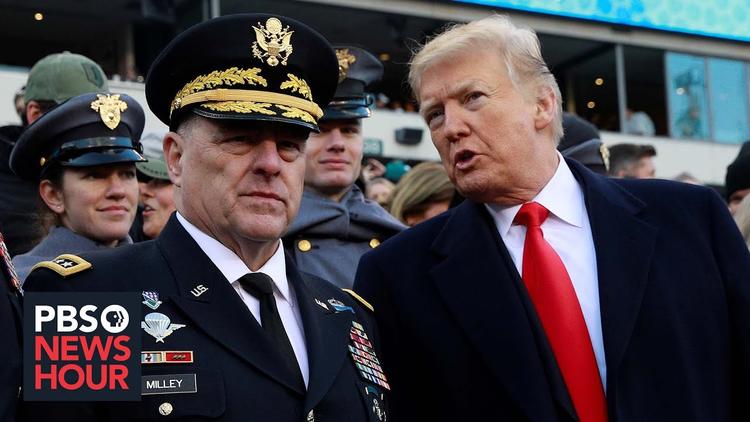 Ann Arbor (Informed Comment) – As a historian, I am fascinated by the practical appeals to history that appear throughout the story of Gen. Mark A. Milley’s struggles with Trump in the last months of the latter’s presidency. Milley believes that Jan. 6 was just an initial skirmish, sort of like the failed 1905 revolution in Russia, which might lay the groundwork for a big successful revolution like that in October, 1917 in Russia. Only, of course, the Trumpies 12 years from now would be making a fascist putsch, not a Communist revolution.

It is a chilling vision.

Isaac Stanley-Becker at the Washington Post summarizes some tidbits from Peril, the forthcoming book by Bob Woodward and Robert Costa about Trump’s last ride.

Milley was afraid that Trump’s rhetoric against China in October, coupled with US maneuvers in the South China Sea at that time, would heighten tensions to the point where war might break out. He called Gen. Li Zuocheng, the head of the People’s Liberation Army, on October 30, just before the election, to assure him: “General Li, I want to assure you that the American government is stable and everything is going to be okay. We are not going to attack or conduct any kinetic operations against you.”

Everyone had been able to see for some time that Trump was not stable, but Li appears to have been mollified by Milley’s October call.

Trump spent October lambasting China for “sending us” the novel coronavirus, as though it had been a covert biological weapons attack, and demanding enormous reparations from Beijing.

“China said it dispatched ships and planes to track the U.S. guided-missile destroyer John S. McCain as it passed near Chinese-held islands in the South China Sea. The People’s Liberation Army accused the U.S. warship of trespassing into Chinese territorial waters on Friday near the Paracel Islands — called Xisha by China — during the latest freedom of navigation missions by the U.S. Navy aimed at defying China’s vast claims in the strategic waterway.”

A Chinese spokesman denounced “navigation hegemony” and added that the US had “seriously violated China’s sovereignty and security interests, and gravely jeopardized peace and stability in the South China Sea.”

So Beijing was upset, and feeling under threat by Trump’s provocations. Milley had apparently seen signals intelligence that the Chinese high command feared a Trump attack, and he wanted to assure his counterpart that none was forthcoming.

On January 6, Trump instigated the Capitol insurrection. CIA Director Gina Haspel told Milley, “We are on the way to a right-wing coup.”

Peril says that Milley saw January 6 as analogous to the failed 1905 Russian Revolution, which the Tsar put down, but which some historians believe set the stage for the October 1917 Bolshevik Revolution.

Milley clearly feared that the insurrection was not a one-off event and that Trumpism was powerful in the country, so that its adherents might brew up a fatal attack on democracy down the road.

Beijing appears to have been alarmed that Trump might do something crazy to China as a way of holding on to power. In a January 8 telephone call between Milley and Li, Milley felt constrained to pledge, officer to officer, that if Trump did order an attack on China, he would call Li and warn him as soon as he knew of it.

BBC Monitoring noted that Foreign Ministry spokeswoman Hua Chunying (752.6K followers) tweeted pointing out that when such protests occurred elsewhere, the US often supported them and and was being hypocritical in condemning the Capitol insurrection. She snidely hoped that “the American people could regain their #peace, stability & #safety ASAP”. Chinese diplomats said that the US had called Hong Kong “rioters” “heroes” but was condemning the DC rioters. (The Hong Kong democracy protesters are not actually rioters or like the insurrectionists).

The Chinese press accused Trump of contempt for an international rules-based order and spoke of the US entering a period of instability because of the high unemployment caused by the Trump administration’s mishandling of the pandemic.

But from what Peril is reported to have said, there must have been fear in Beijing that Trump was both insane and had conceived a plan to strike China with nukes to wag the dog and make himself dictator. Such fears don’t appear in the public record, but that Gen. Li entertained them is the only thing that makes sense of the lengths to which Milley went to reassure him.

The account of their conversation reminds me of the old television film from the 60s, Failsafe, about the bargains US and Soviet leaders had to make after an accidental firing of an ICBM.

For someone brought up in the era of Cold War brinksmanship, the report of Milley’s conversations is extremely alarming, most of all for information we do not yet have.

It is possible that Trump’s insane murder of Gen. Qasem Soleimani of Iran on Jan. 3, 2020, fed into Chinese fears that he might lash out at them. Of Trump’s desire to hit Iran, Gina Haspel at the CIA asked, “This is a highly dangerous situation. We are going to lash out for his ego?”