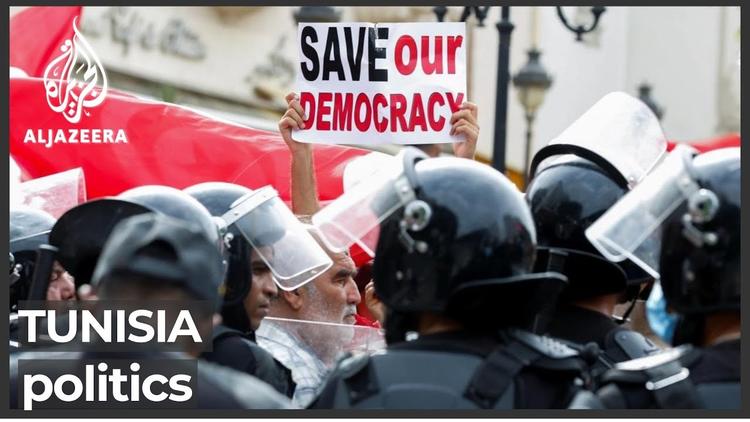 ( Joint Statement of Human Rights Watch et al.) – The promulgation on September 22, of Presidential Decree No. 117 implicitly abrogating the constitutional order in Tunisia is a first step towards authoritarianism. This turning point threatens the human rights and democratic aspirations of the Tunisian people.

While recognizing the limits of the current political system established by the constitution of 2014, we call for any reform of this system to be carried out in full respect of the constitutional order, and in particular of the separation of powers and in full guarantee of fundamental freedoms and human rights.

There may be a need to rethink the political system and reform the 2014 Constitution – both fruit of a long democratic process. However, these reforms cannot be dictated unilaterally by the presidential power without pluralist debate and effective control.

The constitution is no longer the source of laws, and no recourse will be possible against the presidential decrees. The provisional body for the review of the constitutionality of laws has been suspended. The President of the Republic exercises all executive powers and will be assisted by a government that acts entirely at the discretion of the President, who in turn chairs the Council of Ministers. All these powers are vested in the presidency without any time limit.

Under the disguise of a roadmap, the President with the support of a commission will be responsible for drawing up political reforms in order to establish “a true democratic regime in which the people are effectively the holders of sovereignty”. Contrary to recurring announcements by the President of the Republic, he has not progressed in the fight against corruption or against the impunity regarding the martyrs of the revolution, transitional justice, political assassinations, and terrorism. There is also no clear program on how to stem the economic crisis that has plagued Tunisia for years. Tunisia, which has so far been the only country in the region that inspired hope for real change, seems to have turned its back on the emerging democracy.

Time and again in history, we have seen the serious consequences for human rights when either the executive or the presidential authority seized power. We recall that international human rights law authorizes, under strict conditions, the promulgation of emergency powers. However, these are temporary derogations strictly conditioned by the principles of legality, necessity, and proportionality and by the existence of rigorous judicial control. Above all, international law requires that emergency situations be dealt with within the framework of the rule of law. Any change in the political or constitutional framework must happen within the framework provided by the Constitution, which foresees the conditions for its own modification in full respect of the democratic process.

Faced with the alarming drifts we are witnessing, national and international civil society organizations strongly denounce the decisions taken unilaterally by President Kais Saied, reaffirm their unwavering attachment to democratic principles, and condemn the seizure of power and the lack of any form of safeguards. We undertake to support any process aimed at overcoming the current political and constitutional crisis on the condition that it respects the rule of law, human rights guarantees, and the democratic expression of the aspirations of the people.