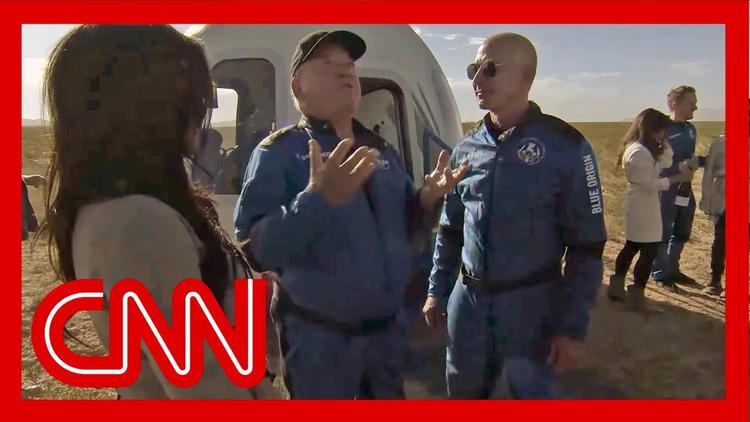 Ann Arbor (Informed Comment) – On Wednesday, pop culture icon William Shatner, Star Trek‘s Captain James Tiberius Kirk, explained the enormity of seeing the earth from a suborbital flight on Blue Origin’s New Shepherd space craft. Part of what he said when he returned from 66 miles up got lost in all of the news reports I’ve seen, and it is the most important part.

Here’s a portion of what CNBC printed in what they alleged was the complete transcript of Shatner’s remarks:

“I mean, the little things, the weightlessness, and to see the blue color whip by and now you’re staring into blackness. That’s the thing. This covering of blue is this sheet, this blanket, this comforter of blue around that we have around us. We think ‘oh, that’s blue sky’ and suddenly you shoot through it all of a sudden, like you whip a sheet off you when you’re asleep, and you’re looking into blackness – into black ugliness. And you look down, there’s the blue down there, and the black up there, and there is Mother Earth and comfort and – is there death? Is that the way death is?”

But here’s the crucial takeaway, the last phrase of which is omitted by CNBC:

“What I would love to do is communicate as much as possible the jeopardy, the moment you see how vuln– the vulnerability of everything. It so small. This air which is keeping us alive is thinner than your skin. It’s a sliver. It’s immeasurably small when you think in terms of the universe. It’s negligible, this air. Mars doesn’t have it. It’s so thin. And to dirty it…”

“The jeopardy . . . And to dirty it!” To fill this precious atmosphere, unique in our solar system, with clouds of burned coal dust and with greenhouse gases, Shatner says, is . . . what? Despicable. Unthinkable.

Just when Shatner is getting on to the subject about how what he saw reinforced his horror at the way we are polluting the atmosphere and imperiling the earth with man-made global heating, Bezos interrupts him: “It goes so fast.” Bezos doesn’t want Captain Kirk expounding on the evils of climate change on his promotional clip. He gets him talking about the experience again. Not the conclusion he drew from that experience.

But we know what Shatner thinks. He thinks that the sunny optimism of the original 1960s Star Trek TV series, which reflected the view of the future held by its creator, Gene Rodenberry, was misplaced. Shatner as Capt. Kirk played a role in helping the world imagine a better future.

As Shatner lived through the succeeding decades, however, he discovered the reality of the climate emergency and was filled with alarm.

In a 2016 interview with Brian Fung at the Washington Post, Shatner said:

“The biggest threat to our world today is climate change. The future is exciting because the future is always hope … What seems to be happening is that the future is filled with dread.”

In the same interview, he said of the science fiction writers he worked with in the 1960s, “There was all kinds of interest in flying vehicles and health and the state of the world. That we wouldn’t be melting away, into the sixth extinction. It would be a much more pleasant. Peaceful. Humane world. Than it is.”

Fung asked Shatner if any technologies scared him. The actor replied,

That’s what Shatner wanted to say on his return to earth. He wanted to say that our thin, fragile, vulnerable, unique atmosphere is in danger from petroleum, gas and coal, that this mothering “blue blanket” of the earth is in danger of being enveloped by the grim blackness of galactic emptiness because of the way we are treating it.

That is what for-profit news did not report about Shatner’s profound experience and his articulation of it. He wants you screaming at the top of your lungs that our pale blue dot is in danger of being burned up and engulfed by an unfeeling, black cosmos. And that only we can stop it from getting worse, because we are the ones making it worse.