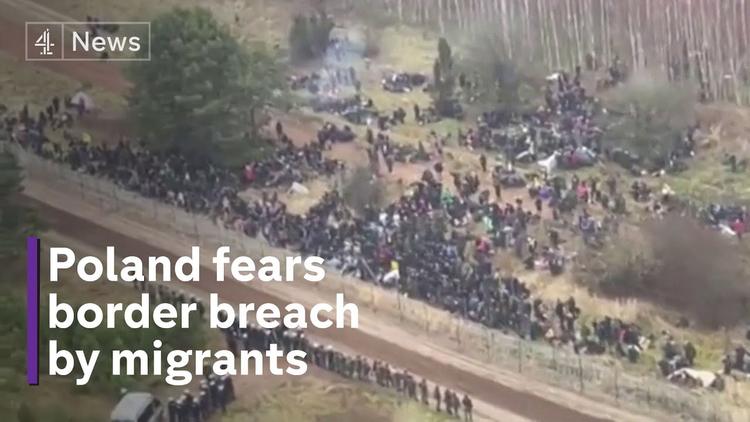 Belgrade (Special to Informed Comment) – Thousands of migrants from Iraq, Syria, and other Middle Eastern countries, are attempting to breach a razor wire fence at the border between Belarus and Poland. Their final destination is Germany, and possibly other rich member-states of the European Union. But why are they trying to illegally enter the EU from the nation that has often been dubbed “Europe’s last dictatorship”?

Following the controversial presidential election in August 2020 and the crackdown on anti-government protesters, the European Union started imposing sanctions on Belarus and its President Alexander Lukashenko. Relations between Brussels and Minsk went from bad to worse. In May, after Belarusian authorities forced a Ryanair plane, flying from Athens to Vilnius, to land in the Belarusian capital, which resulted in the imprisonment of a dissident activist Roman Protasevich, the EU announced additional package of sanctions against the Eastern European nation.

Lukashenko, for his part, threatened to allow migrants and drugs to pour into Western Europe if sanctions are imposed on his country. In short order, he really allowed thousands of Middle Eastern asylum seekers to illegally cross the border between Belarus and EU member Lithuania. And that was the beginning of the migrant crisis.

Given that most migrants were from Iraq, the EU pressured Iraqi leaders to suspend direct flights between their country and Belarus, but that did not prevent Lukashenko from keep providing “asymmetric response” to Western sanctions. Migrants are now arriving to the former Soviet republic mostly via Istanbul and Dubai, and Minsk reportedly plans to increase number of flights from the Middle East to Belarus. Moreover, it is entirely possible that migrants will soon have the opportunity to fly not only to Minsk, but to other Belarusian cities as well. But who are the migrants and where do they come from?

According to reports, most of the illegal migrants trying to get to the European Union through Belarus are Iraqi citizens – Kurds and Arabs. There are also residents of Syria, Congo and Cameroon. They arrive to the capital of Belarus mainly from three cities on the territory of Iraqi Kurdistan: Erbil, Shiladze and Sulaimaniya.

“Many of us have brought families. I have six kids. All of them are little. There is no food, milk, diapers for them. We have no firewood to warm us up, no tents to shelter us from rain and they don’t let us into Europe”, Belarus’ state-owned BelTA News Agency quoted an unnamed migrant on the Belarusian-Polish border.

In neighboring Lithuania migrants have staged a protest in a refugee reception center demanding to be allowed to leave for Germany and other countries of the European Union. Brussels has, however, accused Lukashenko of facilitating the influx of migrants in retaliation against sanctions, while German special services reportedly claim that about 800-1000 illegal migrants arrive to Belarus from the Middle East on a daily basis.

It is not surprising, therefore, that Iraqi Ministry of Foreign Affairs and Kurdistan Regional Government, most likely under another EU pressure, recently ordered Belarus to shut down its consulates in Baghdad and Erbil. Such a move will, however, unlikely stop mass migrations of Iraqis to Belarus – a country they see as a route toward Western Europe in quest for a better life. Although for them Poland is merely a transit nation on their way to Germany, Warsaw has deployed 12,000 troops to the Belarusian border in order to prevent migrants from entering the EU. Some Belarusian analysts claim that Poland is trying to increase its importance in the region, and draw more attention to itself, especially from its ally, the United States.

Some Western analysts, in contrast, claim that the mastermind of the migrant crisis is Russian President Vladimir Putin, rather than Belarusian leader. They believe that Putin uses thousands of desperate migrants to drive a wedge between the EU. Indeed, it is very probable that Lukashenko got the green light from the Kremlin to stage a migrant crisis on the EU borders, but it is wrong see Belarusian President through the prism of Vladimir Putin, or to think of him as Putin’s puppet. The two leaders have a history of disputes and odds, and even though sanction-hit Belarus is heavily dependent on Russia, Lukashenko still struggles to preserve as much sovereignty as possible.

Thus, if the West eventually pressures Putin to stop Lukashenko’s actions on Belarus – EU border, the Belarusian leader – quite aware that Brussels will not lift any sanctions, since that would be a clear demonstration of weakness – will likely seek certain concessions from Moscow in order to end the influx of migrants. Meanwhile, he is expected to continue using refugees as a political weapon against the EU, which is a model that has already been applied by Turkish President Recep Tayyip Erdogan, and that has proved to be very efficient.

According to the migrants’ estimates, about 3,000 asylum seekers from the Middle East remain concentrated on Belarusian-Polish border. There are many children in the crowd, and the number of asylum seekers is expected to grow. Some reports suggest that Minsk is trying to strengthen political ties with various Middle Eastern countries in an attempt to destabilize eastern EU members. For instance, on November 3, Deputy Foreign Minister of Belarus Nikolai Borisevich met with the Syrian Ambassador to Minsk Mohammad al-Umrani, and they discussed further mutual support in the international arena.

The Ambassador expressed gratitude for the humanitarian assistance provided by the Republic of Belarus to the Syrian people. Indeed, Belarus is actively assisting the Syrian people who are trying to reach the EU, while the United States calls on Belarusian leader to “immediately halt his campaign of orchestrating and coercing the illegal flow of migrants across his country’s border into Europe.”

The US call will, however, have very little affect on Lukashenko’s policy, unless the CIA Director Bill Burns, who recently met with Putin in Moscow, urged Russian leader to demand Belarusian President to end the border crisis. Migrants may arrive to the EU from Belarus, but politically, the West is quite aware that the road to Minsk may well run through Moscow.