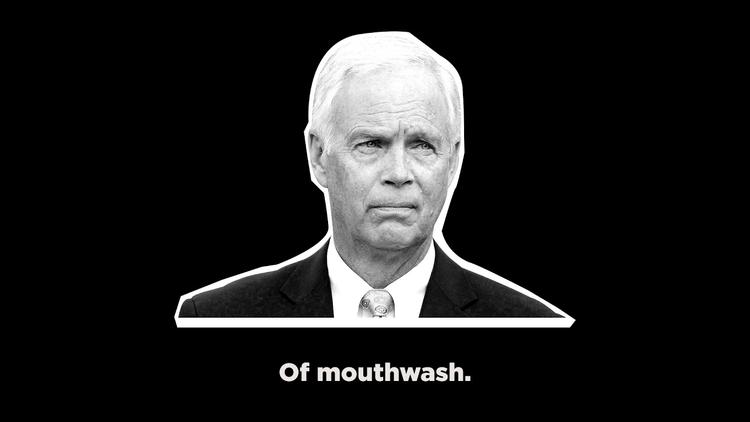 Ann Arbor (Informed Comment) – Sen. Ron Johnson (R-WI) is now alleging that mouthwashes are the way to avoid getting COVID-19. Johnson, a powerful figure in Washington and former chair of the committee on Homeland Security, has a history of promoting quackery regarding the novel coronavirus. He said,

“Standard gargle, mouthwash, has been proven to kill the coronavirus. If you get it, you may reduce viral replication. Why not try all these things?”

Joshua Cohen at Forbes points out that Johnson called anti-vaxers to testify before his committee in 2020.

Mouthwashes often contain alcohol, which will in fact kill microbes like viruses. The problem is that the effect is temporary and COVID-19 is a respiratory disease that you can inhale through your nostrils or get on your hands and then rub into your eyes.

The way to vastly lower your chances of getting COVID-19 is to get vaccinated.

We have now done a real-time experiment in the efficacy of vaccinations against COVID-19, and the results are in. Almost all the people now getting sick with, being put into he ICU with, and dying from the coronavirus are unvaccinated.

In Connecticut, for instance, only 1.2 percent of fully vaccinated residents have contracted COVID-19. For the most part, such patients are very elderly or have underlying medical conditions that interfere with the production of antibodies, so that the vaccine doesn’t fully work on them. But if you line up 100 people who are vaccinated, only one of them is likely to fall ill with COVID-19.

The unvaccinated are sixteen times more likely to die of the coronavirus than those who have gotten their shots.

The disparity in serious disease and deaths holds true even when other differences, such as age, are taken into account. While the researchers cannot exactly match voter party identification to death rates in mixed counties, there is enough of a correlation here to be sure that party preference is driving this difference.

The mechanism whereby Republican voters are only 59% vaccinated while Democratic ones are 93% vaccinated is that many Republican politicians have spread misinformation about the virus and the vaccines.

We saw last year the leader of the Republican Party claim that the coronavirus is “just a flu,” that it would “disappear,” that it could be cured by drinking bleach (which will kill you dead) or by ingesting hydroxychloroquine (which can weaken your heart) or by taking ivermectin, used to kill parasites in horses.

Since the former guy was banished on social media his role in spreading deadly republican quackery in public has been taken up by cranks such as Johnson. He is joined by Sen. Rand Paul of Kentucky, and Sen. Roger Marshall of Kansas. Both of them are physicians. Marshall hasn’t discouraged vaccination across the board but has said that people who have had COVID don’t need a shot (they do) and has said that masks don’t work and even do more harm than good. Masks have been found to be 80% effective against transmission of the virus and so are almost as good as being vaccinated.

It isn’t only the certifiable wing of the current Republican Party that is responsible for this fatal misinformation. Even smart and informed Republican politicians are at least remaining silent on this issue for fear of the storm troopers in their own base. Virtually everyone who has died of the virus since June 1, some 1,000 a day, died because they were not vaccinated and were victims of misinformation at the hands of their party leaders. That is a kind of genocide.