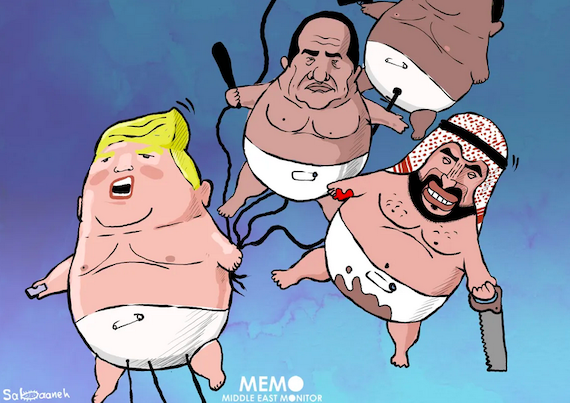 (Middle East Monitor ) – Governments are described as authoritarian when they do not grant people the right to choose them freely and change them freely through periodic and fair elections when they prevent the free circulation of information and refrain from being transparent in their management of public affairs, and when they evade respect for the citizen’s personal, civil and political rights and freedoms such as freedom of belief, expression, opinion, and organisation, instead of bargaining with them on their economic and social rights and right to security.

No to free public space, no to free media, no to political parties that seek a free and peaceful transfer of power, no to civil society that monitors, asks and holds rulers accountable, no to religious, intellectual, cultural, and academic freedoms, and no to personal freedom. These are the noes of authoritarian governments that are repeated across space and time, putting Spain between the 1930s and 1970s, Brazil in the 1960s and 1970s, Russia since Vladimir Putin managed its state institutions and agencies, Hungary, which today is being pushed by a democratically elected government away from democracy and liberalism, the Kingdom Saudi Arabia since its inception in the first quarter of the twentieth century, and Egypt since the declaration of the republic in 1952, all on the same level.

Authoritarian governments are similar in their neglect of the two basic values ​​of the rule of law. The first value is the value of justice based on the objectivity of legal rules, the transparency of litigation procedures and guarantees of human rights and freedoms. The second value is the value of equality based on refraining from discrimination between citizens and holding public and private institutions accountable when they engage in discriminatory practices. Despite their similarities, authoritarians are not always the same regarding the details and ways of dealing with public authorities, from judicial institutions to utilising the legislative tool on which parliaments are based (that is, issuing new laws and passing amendments to existing laws) to manage the affairs of the state, society and the citizen. Authoritarians are also different in terms of the limits of their commitment to attributing their decisions and policies to “applicable laws and regulations” and their eagerness to fabricate an image of governance respecting the rule of law.

Authoritarian governments treat the law as a tool to impose their control over society, to seize public institutions and dominate private ones, to subjugate the citizen and force them to avoid the peaceful claim of their rights and freedoms and to punish those who refrain from offering loyalty and obedience.

We find that few of the contemporary authoritarian governments do not deny their explicit hostility to the existence of independent judicial institutions, and they do not cease to violate the courts and interfere in their work in various ways. Few of them disregard laws and regulations and continue to practice repression towards the citizen, control towards society, and subjugation towards judicial and legislative institutions, relying only on what is available to them from the tools of coercive force and official violence. Only a few authoritarian governments do not seek to beautify their image by keeping the security component as a formality away from the face of governance, as the majority wants the security component to manage the affairs of states and societies from behind a curtain. Only a few authoritarian governments are not interested in falsifying people’s awareness by promoting that the rule of the individual is not the rule of one individual, the ruling party is not a single ruling party, and the presidential and parliamentary elections, the results of which are known in advance, are serious elections that translate the popular will freely and fairly. Only a few authoritarian governments do not shy away from declaring to the people that the rule is the rule of the individual or the rule of one party, that the ballot boxes are of no importance, and that without doing things this way, states will fall, societies will be destroyed, security will collapse, and stability will be no more.

If this is the case for a few authoritarian governments in dealing with judicial and legislative institutions and with public opinion, then where do the largest number of authoritarians in the twenty-first century stand?

The majority of contemporary authoritarians insist that their governments respect the rule of law, and publicly declare refraining from interfering in the work of judicial institutions and courts of all kinds and degrees, as well as their abstention from controlling legislative institutions. They also stress that the independent judiciary is a necessity to achieve the stability of the state and society, as is the case for an independent parliament, and it does not object to the constitutional provision of the independence of judicial institutions, the impartiality of judges, the independence of parliaments, and the establishment of the principles of separation and balance between the three legislative, executive and judicial powers. However, the frequency of declarations of good government intentions and the presence of clear-cut constitutional guarantees do not prevent the continuous pursuit of contemporary authoritarians to subjugate the judiciary and subject it to their whims, just as they pressure legislative institutions to reduce them to parliaments whose only role is to pass bills proposed by governments and approve the decisions and policies of rulers without serious and independent control.

The majority of these authoritarians in the twenty-first century do not want to appear as a lawbreaker who represses, tracks, disciplines and subjugates, or display outright hostility to independent judicial institutions as it pressures the judiciary and judges, or abuses parliaments as they pass laws restricting freedoms. With few exceptions, the authoritarians of the twenty-first century disregard the basic values ​​of the rule of law while claiming to respect its sovereignty and destroy the meanings of justice and equality in managing the affairs of state and society by forcing parliaments to pass unjust and discriminatory laws and legal amendments.

The free media in Russia is suppressed and civil society is monitored for security by laws and regulations. In Hungary, human rights organisations are delegitimised and those following the laws and regulations are persecuted, and in Belarus, President Lukashenko dismisses university professors and public servants according to political whims because laws and regulations enable him to do so. In the Arab countries, there are choppy seas of authoritarian actions of rulers and governments whose only concern is the subjugation of citizens, managing society and controlling public space.

Amr Hamzawy is a senior research scholar at the Center for Democracy, Development, and the Rule of Law, Stanford University