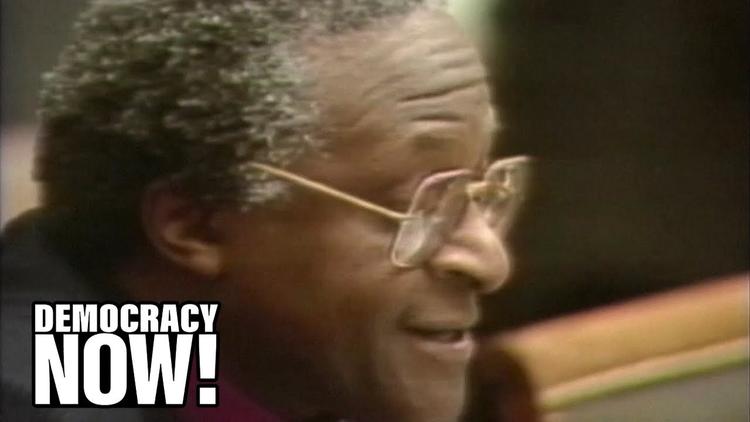 ( Mondoweiss) – What does the end of South African apartheid tell us about how Israeli apartheid can end? That sanctions on Israel are required, and that a civil society mass movement is the only way to get there.

With the December 26, 2021, death of Bishop Desmond Tutu, six weeks after the November 11, 2021, death of Frederik Willem de Klerk, and seven years after the December 5, 2013, passing of Nelson Mandela (December 5, 2013), the world lost the three Nobel Peace Prize winning heroes who ended South African Apartheid. It is natural to ask how their deaths can inform our fight to end Israeli apartheid?

Surprisingly little. South African apartheid did not end because those three leaders surmounted political barriers. The three respected each other, and saw each other as partners for peace, and that eased the negotiation to sort out the million details involved in transforming South Africa from apartheid to democracy.

But what made the negotiations possible is that both sides recognized that South African apartheid was not working, and everyone’s life would improve if apartheid ended. This is an enormous difference between South Africa and Israel where elite and ordinary Israeli Jews believe apartheid (although they don’t call it such) is working for them.

An important South Africa – Israel difference is that South Africa was weak whereas Israel is strong. South Africa had few diplomatic friends besides the U.S. and U.K., whereas most U.N. states, including several Arab states, are friends with Israel, exceptions being Iran, Syria, and Lebanon. The South African economy was stalled by the 1980s whereas Israel’s economy is booming. The homelands were a drain on South Africa’s economy whereas the E.U. and Arab states pay for most expenses in the occupied Palestinian territory. Like Israel today, South Africa then, had a strong military, although South Africa suffered a major defeat at Cuito Cuanavale in 1988 at the hands of the Cuban and Angolan armies supported by South African and Namibian liberation militias. Israeli defeats, such as in Lebanon, occurred decades ago.

Because the South African government was weak, it could not stand up to international civic and government pressure to end apartheid to achieve Black equality. In contrast, Israel’s strength allows it to prevent international pressure from ever occurring, and to ignore pressure when it does occur.

1980s South African elite (political, business, and intellectual leaders) started to weaken apartheid over a decade before F.W. de Klerk ended the ban on the ANC and released Mandela from prison in 1990. South African apartheid focused on separate development with Blacks confined to Homelands; but that was incompatible with capitalism that needed Black workers in the cities. To circumvent apartheid rules, P.W. Botha (South African president prior to de Klerk) legalized Black trade unions as early as 1978 — well before sanctions started to cut deeply into the South African economy after 1985.

To pave the way for ending apartheid, the South African government sponsored or permitted a series of secret meetings and “treks.” Secret meetings started in 1985 between Nelson Mandela (who was still in prison) and high government officials including Kobie Coetsee (South African Minister of Justice) and Niël Barnard (head of South Africa’s National Intelligence Service). They culminated in 1989 with separate secret meetings Mandela had with Botha and de Klerk.

The secret meetings and “treks” built rapport and mutual respect between the government and ANC that enabled the actual negotiations to transform South Africa to proceed. Mandela and the ANC charmed government leaders and demonstrated that White Afrikaners would have a place and be welcomed in a democratic South Africa.

In contrast, Israeli elite believe Israeli apartheid is working for Israeli Jews. Rather than weaken Israeli apartheid, in recent decades Israel has tightening its apartheid rules and is taking actions to destroy Palestinian NGOs and civic society. Although numerous civic groups pursue Jewish-Arab dialog, official contacts between the sides are curtailed by Israel.

The chief lesson is that sanctions, government-imposed restrictions on Israel, are required to pressure Israel to end apartheid. Decades of boycott and divestment had little effect on South African government policies. But sanctions can weaken Israel. In South Africa, when sanctions started to bite in 1985, they deprived South Africa of international funding and apartheid ended in a few years.

But how to get states friendly with Israel to impose sanctions? The U.S., U.K., E.U., Russia, China, Turkey, Arab states, Brazil, India, and other states do not seem to be offended by Israeli oppression and dispossession of Palestinians, nor war crimes and crimes against humanity that Israel commits during its bombardment of Gaza and Syria, and cyber attacks against Iran.

A civil society mass movement is the only tool. In the U.S., mass movements pressured the government to end the Vietnam war and move towards democracy with the 1964 and 1965 Civil Rights and Voting Rights Acts. Internationally, a mass movement eventually moved states to sanction South Africa.

The BDS movement is headed in generally the right direction. Every month another church, union, professional, or civic organization signs onto BDS, even if the only action is to say they support BDS without actually boycotting or divesting from anything. Those efforts must be redoubled because thousands of BDS sign-ups are needed to move the U.S. government to impose sanctions on Israel.

Reprinted from Mondoweiss with the author’s permission.

Jeff Warner Jeff Warner is a Jewish peace activist in Los Angeles. He is active in LA Jews for Peace, Jews for Peace Between Israelis and Palestinians, Americans for Peace Now, and Cousins Club of Orange County. He organized street demonstrations against the Israeli siege of Gaza since late 2007, and against the Israeli bombardment of Gaza during the December-January massacre. Warner is a retired geologist.