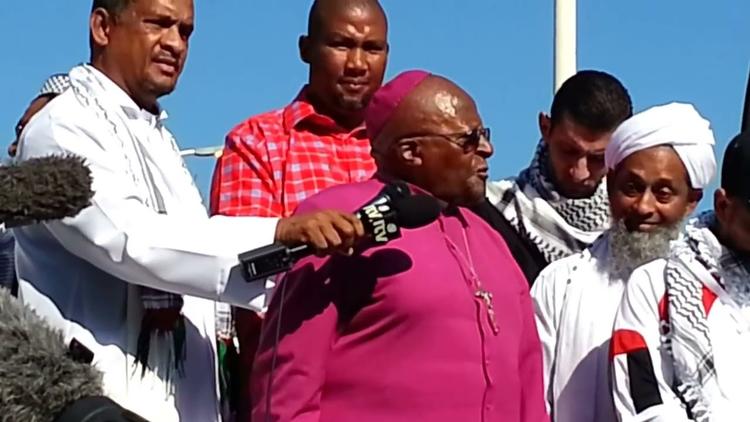 Tutu was an amazingly courageous voice against the white nationalist Apartheid system in South Africa, which segregated Blacks and deprived them of a good education and economic opportunities, and which attempted to create reservations for them in which the state stripped them of their citizenship.

‘Desmond Tutu has formulated his objective as “a democratic and just society without racial divisions”, and has set forward the following points as minimum demands:

1. equal civil rights for all
2. the abolition of South Africa’s passport laws
3. a common system of education
4. the cessation of forced deportation from South Africa to the so-called “homelands” ‘

The last point referred to the government’s carving out of “Bantustans” or statelets it declared to be not South Africa, the residents of which would not have citizenship. The white Afrikaners behind this policy hoped to decrease the demographic weight of Blacks in South Africa over time, making it a white country, by expelling Blacks to these Bantustans.

For these reasons (and American television will strictly not tell you this), Tutu spoke out equally courageously and eloquently about Palestinian rights. In a 2002 op-ed for The Guardian, Tutu wrote,

“In our struggle against apartheid, the great supporters were Jewish people. They almost instinctively had to be on the side of the disenfranchised, of the voiceless ones, fighting injustice, oppression and evil. I have continued to feel strongly with the Jews. I am patron of a Holocaust centre in South Africa. I believe Israel has a right to secure borders.

What is not so understandable, not justified, is what it did to another people to guarantee its existence. I’ve been very deeply distressed in my visit to the Holy Land; it reminded me so much of what happened to us black people in South Africa. I have seen the humiliation of the Palestinians at checkpoints and roadblocks, suffering like us when young white police officers prevented us from moving about.”

He spoke of the dispossession of Palestinians from their homes by Israelis, who took their land. He continued,

Tutu called for a peaceful resolution of Apartheid in Occupied Palestine, such as occurred in South Africa.

He also complained that in the United States to bring up the Israeli colonial project in the Palestinian territories was immediately to attract charges of anti-Semitism. With his gentle humor, he riposted that to voice such criticism of Israeli policy “is to be immediately dubbed anti-semitic, as if the Palestinians were not semitic. I am not even anti-white, despite the madness of that group. And how did it come about that Israel was collaborating with the apartheid government on security measures?”

In 2014 he wrote for the Israeli newspaper Haaretz about a pro-Palestinian rally he attended:

“Over the past few weeks, more than 1.6 million people across the world have signed onto this movement by joining an Avaaz campaign calling on corporations profiting from the Israeli occupation and/or implicated in the abuse and repression of Palestinians to pull out. The campaign specifically targets Dutch pension fund ABP; Barclays Bank; security systems supplier G4S; French transport company Veolia; computer company Hewlett-Packard; and bulldozer supplier Caterpillar. Last month, 17 EU governments urged their citizens to avoid doing business in or investing in illegal Israeli settlements.’

He urged that the movement be nonviolent, and condemned Hamas’s rockets. But he wasn’t afraid to be called a terrorist (the Apartheid regime branded all its opponents ‘terrorists’ as well). His goal here, as elsewhere in his rich life, was peace, love and forgiveness. Especially forgiveness.

His life was epic, and full of love of others (including many dear Jewish friends who also worked against Apartheid alongside him).

In 1986, Tutu had become the first Black archbishop of the Anglican Church in Cape Town.

Tutu was born in Kerksdorp, a Gold Rush town in the North West Province. His father became an elementary school principal and his mother cooked and cleaned at a school for the blind. Already in 1913, the newly independent South African government began making Blacks live on reservations and usurping their property. After World War II, in 1948, the white nationalist National Party came to power. Starting in 1949, when he was 19, the Afrikaner-dominated government began passing Apartheid laws forbidding inter-racial marriage and imposing an even stricter segregation, which resembled the Jim Crow laws passed by Southern white legislators in the late nineteenth century to deprive African-Americans of the vote and to segregate them from whites.

Tutu was initially a high school teacher, but gained a sense that religious leaders were best placed to challenge racial inequality. In 1953, an Apartheid law lowered the standards for the education of Black children, trying to ensure that they learned only enough to be docile laborers. Tutu became an ordained Anglican priest (Americans would say Episcopalian) and studied theology in Johannesburg. Then he went off to London for an MA in theology, which he received from King’s College in 1966. On his return he rose quickly through the Anglican church hierarchy. In 1976 he became bishop of Lesotho, a former British colony that had become an independent kingdom in 1966. It is completely surrounded by South Africa.

From there, Tutu began speaking out against Apartheid, and continued even when he returned to South Africa, as an official of the Council of Churches. These were liberal Protestant denominations and the Council was the South African national sub-group of the World Council of Churches. The Afrikaner Calvinist churches withdrew from it because of its opposition to Apartheid.

After the Apartheid government collapsed and Nelson Mandela became president in the early 1990s, he appointed Archbishop Tutu to head the Truth and Reconciliation Commission, which investigated the crimes of the Apartheid regime. These included torture, unlawful imprisonment and unlawful killing, among others.

Tutu’s commission adopted the rule that a public and detailed confession of wrongdoing was sufficient punishment, and so elicited from some former Afrikaner war criminals a full picture of their activities, but then pardoned them. Many South Africans were angry about this leniency, but Tutu’s philosophy was that unless the country, including the Afrikaaners, fully faced the history and documented it, they would never be able to get past it. The war criminals after all would hardly have confessed at such length if they had simply been tried and imprisoned, where a conviction could even have been gotten.

The Israeli press is churlishly lambasting Tutu as an “enemy” of Israel, which I think I’ve shown he was not. Indeed, Israel’s continued and blatant war crimes are destroying the country, and its true friends owe it frankness and tough love. Tutu didn’t hate anyone, but he loved justice.