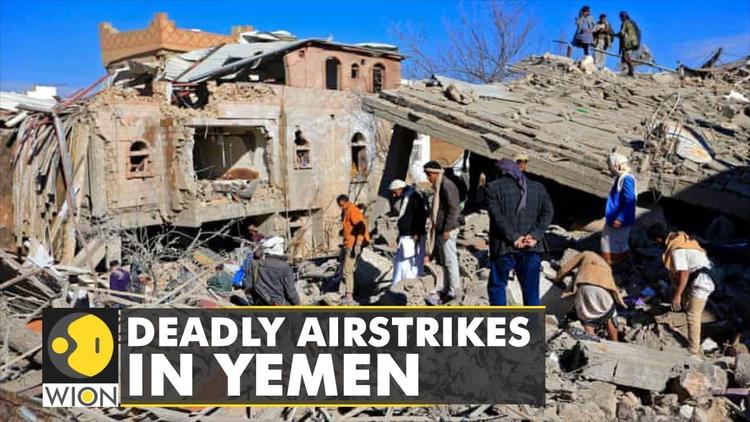 Ann Arbor (Informed Comment) – The Saudis and the United Arab Emirates launched an air campaign of 45 air strikes on Yemen on Friday. According to the International Committee of the Red Cross, one of the strikes hit a migrant detention facility in Sa’adeh in north Yemen, killing over 100 detainees there. In addition, there were large numbers of wounded, and the Red Cross mobilized ambulances to get them to two area hospitals. The Houthis are saying there were 233 casualties if you count the wounded.

This aerial bombing was a war crime by Riyadh and Abu Dhabi, since detainees are civilians and are not supposed to be targeted according to the laws of war, and belligerents are supposed to exercise special care in not striking at them. The two Gulf oil monarchies either deliberately hit a civilian detention center or they were reckless, but are culpable either way. The facility was used to detain undocumented migrants attempting to make their way through Yemen to Saudi Arabia for work, and included women and minors.

Article continues after bonus video
WION: “UN condemns the deadly airstrikes in Yemen which has killed dozens of people, including children”

The regional director of the ICRC for the Near and Middle East, Fabrizio Carboni, said, “It is essential that we protect the lives of people in armed conflict. The human toll that we witness in Yemen is unacceptable.” He added, “Civilians living in densely populated areas have been exposed to increased attacks, causing death and injury and deepening the psychological trauma among the affected communities after seven years of war.”

Carboni is being diplomatic in not naming names, but what he is saying is that the Saudi and Emirati Air Forces have been bombing densely populated urban areas indiscriminately and with increasing disregard for human life. For this reason, the Saudi government attempted to deny that the prison was hit at all. But the Red Cross is more credible here.

The Houthis also have blood on their hands, having subjected towns to artillery and rocket fire in Marib, harming civilians, and last fall they rocketed a prison in Sana’a, the capital, killing some prisoners. Since they are poorly armed and do not have fighter jets, they cannot commit the kind of carnage that the Saudis and the UAE can.

Al-Jazeera Arabic says the Saudi and Emirati air strikes knocked out Yemen’s internet. It also reports civilian deaths from an air strike on the port of Hudeida, including, according to Save the Children, three children.

Joe Biden campaigned on getting the US out of the Yemen War, on denying the Saudis the weaponry to continue to prosecute it, and on ending the fighting. He followed through on the first pledge, since the U.S. no longer provides mid-flight refueling to Saudi jets bombing Yemen, nor does it provide strategic targeting advice. Biden, however, agreed in principle to a $650 million arms deal with Riyadh to sell them air-to-air missiles that are categorized as “defensive.” While the missiles may be intended to protect the Saudis from Houthi drone strikes, I think the deal is bad optics if Biden really wants to pressure them to cease their air war on Yemen. As for ending the war, Biden has sent a special envoy to attempt to get negotiations going, but with little success.

The Houthis took responsibility for a set of drone or rocket attacks on oil facilities in Abu Dhabi, one of the seven emirates of the United Arab Emirates, on Monday, which killed three workers. The Helpers of God militia said that they were taking revenge for heavy UAE bombardment of their positions in recent days. The UAE has been heavily bombing Houthi positions since 2015, and for a while had a significant contingent of troops in Yemen fighting alongside southern separatist forces.

Monday’s attack was the first time the UAE felt any blowback from its heavy involvement in the Yemen War. Friday’s massive air campaign came in response to the bombing of Abu Dhabi.

The Emirates government has demanded that the Biden administration restore the terrorist designation to the Houthis that was imposed by Trump. Biden lifted it because when a government is designated a terrorist entity by the US, it makes it impossible for aid organizations to help people there lest they be charged with material support for terrorism. A horrible famine is stalking Yemen, and if Biden does slap back on the terrorism designation, millions could die as a result. Asked about this issue on Thursday, Biden said it was under consideration.

The Houthis have been attempting to take Shabwa and Marib provinces to the east of Sanaa. Marib has petroleum resources that would allow their government to survive in the long term. The Saudis and the UAE have intervened from the air to stop the Houthi advance, which provoked the current round of tit-for-tat bombings.

The United Nations Development Program has found that 377,000 Yemenis have died as a result of the Saudi-led war that began in 2015, though 60% were not direct victims of military action:

“By comparing the current reality in Yemen to a scenario where no conflict ever occurred, we can provide an estimate of the total death count – the number of deaths caused both directly and indirectly from the conflict. By doing so, we found that by the end of 2021, Yemen’s conflict will lead to 377,000 deaths – nearly 60 per cent of which are indirect and caused by issues associated with conflict like lack of access to food, water, and healthcare.”

“These deaths are overwhelmingly made up of young children who are especially vulnerable to under and malnutrition. In 2021, a Yemeni child under the age of five dies every nine minutes because of the conflict.”

This is a significant increase in the death rate over the last such report, in 2019.

The Helpers of God or Houthis, who hail from the Zaydi Shiite branch of Islam, control North Yemen and some points east to Marib province. The Houthi militia seized the capital, Sanaa in 2014. The Saudis launched their air war on the Helpers of God mini-state in 2015 but despite seven years of bombing, have not been able to dislodge it.