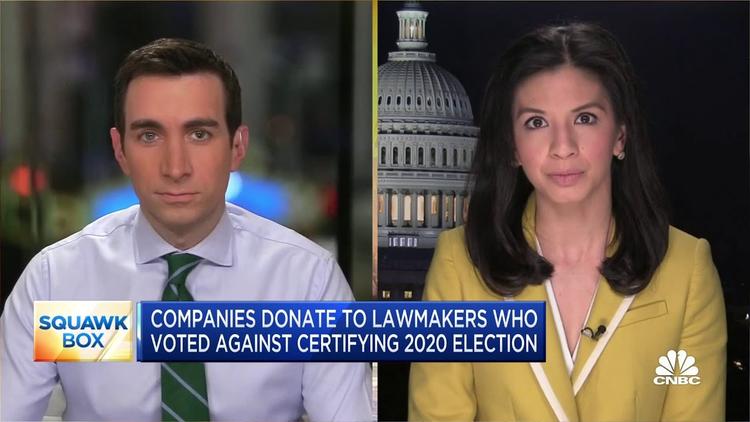 ( Otherwords.org) – One year ago, the foundation of our democracy was jeopardized in a full-blown coup attempt by seditionists egged on by former president Donald Trump. People died.

Confederate flags were waved inside the Capitol. People with zip ties and weapons were ready to do harm or even kill members of Congress and the vice president. These were right-wing extremists who had the encouragement, and even help, from Trump allies in Congress.

When the dust settled, many corporations rightly spoke out and pledged to halt contributions to lawmakers whose rhetoric and actions played a part in the insurrection — including those who voted to throw out the 2020 presidential election results in service of the Big Lie, a group now known as the “Sedition Caucus.”

There’s just one problem. Several of these same companies were alarmingly quick to forgive and forget the assault on democracy and once again side with those who tried to negate the will of the majority of Americans.

In the year since the anti-democratic attack on our Capitol, Accountable.US has found that Fortune 500 company PACs and corporate trade groups had donated more than $8.1 million to the Sedition Caucus through November 2021.

In fact, as we highlight in our new “In Bad Company” report, many of these organizations — including Boeing, UPS, FedEx, Cigna, Pfizer, Johnson &amp; Johnson, and more — sought praise for condemning the insurrection and made flowery statements in support of democracy in the aftermath. Then, within months, they reopened the campaign money spigot to the very politicians that helped instigate the failed coup attempt.

In a prime example, shortly after the Capitol riot, health insurance giant Cigna declared that the company would stop giving money to elected officials who “encouraged or supported violence” on January 6. Apparently the company hoped the public wouldn’t notice when it then doled out at least $30,000 to the Sedition Caucus within months of the insurrection. That’s quite a questionable commitment to democracy.

The increasing volume of corporate donations to lawmakers who voted against certifying the will of the people shows that these companies were never committed to standing up for democracy in the first place. Even as democracy continues to be in the crosshairs of powerful purveyors of the Big Lie, these CEOs would rather amass political influence than stand up for their customers, shareholders, and employees.

If corporations continue to reward those who engage in anti-democratic behavior, it only normalizes that behavior and invites more of it. Democracy had a close call — too close — and when lawmakers who helped instigate the insurrection don’t feel any real consequences for that behavior, there’s nothing stopping them from trying again.

Unfortunately, too many companies would rather tempt fate. These CEOs hiding behind flowery statements are not fooling anyone.

The last few years have made clear that democracy is not a spectator sport. Along with the rest of society, corporations have a responsibility to uphold our most sacred institutions, including our democratic way of life and free and fair elections.

We need to call on these companies to get back on track and recommit to their own stated values in support of democracy. It’s the least they can do for their customers and employees.

Some things should be bigger than the bottom line — especially a healthy democracy for all.

Kyle Herrig is the president of Accountable.US.