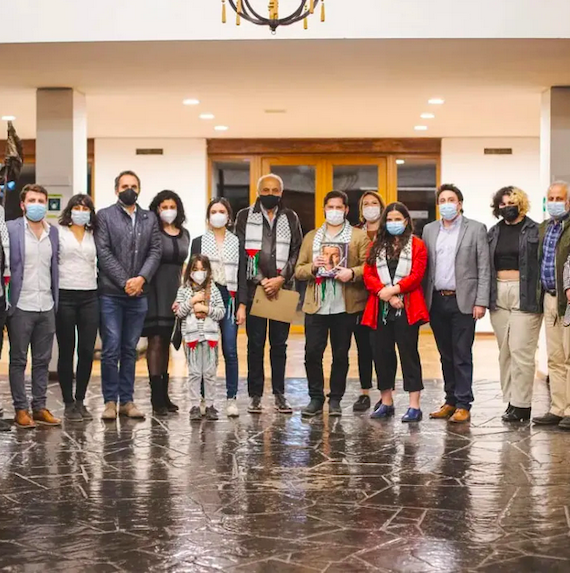 ( Middle East Monitor ) – In Chile, where the largest population of Palestinians in Latin America resides, the Leftist candidate Gabriel Boric has won Chile’s presidential election after he defeated his far-right rival José Antonio Kast by 10 points. 35-year-old Boric’s victory represents a major revival for Chile’s progressive left. The President-elect, Gabriel Boric, is known to be a staunch supporter of the Palestinian cause and defender of human rights, which are being continuously violated in the Occupied Territories. More than once, Boric branded Israel as a “genocidal” and “murderous” state, including during an interview during his campaign: “It doesn’t matter how much power that country has, we need our foreign policy to defend human rights with all its might, regardless of the government,” Boric told Vivo TV Chile.

Massu also thanked the elected president for his continued support for Palestine. “We would like to thank you for your constant support for the Palestinian People and for the promise you made to the sanction for the importation of goods and services that come from the settlements in the Occupied Territories, as well as your defence of human rights in the homeland of our ancestors.”

In an interview with MEMO, Massu said: “The elected President has always defended human rights everywhere around the world, especially about human rights in our occupied land. During his visit last September to our Palestinian community, he made a commitment to maintaining the recognition of the State of Palestine, to respect and enforce international laws. In addition, he confirmed his support to prohibit and impose sanctions on services and products that come from the settlements in the Occupied Territories”.

Boric has always supported the boycott of products that come from illegal Israeli settlements. In July 2020, The Chilean Senate approved a resolution calling on the government to enact legislation that would ban all Israeli settlement products; prohibit companies involved in the Israeli occupation from benefiting from any agreement or bid signed by Chile; apply tourism guidelines for Israel and Palestine that would not allow the promotion of trips to Israel using pictures of East Jerusalem or Bethlehem “among other Palestinian cities”. Boric was one of the supporters and voted for this resolution.

“We hope this progress will be approved in future towards the Palestinian people, especially regarding the boycott and sanction of products and services that come from the settlements in the Occupied Territories, in addition to reactivation of Chile’s role in the international organizations to encourage investigations and condemn Israel’s violation of Palestinians human rights”, Massu said.

Boric’s presidential win was bad news for Israel, and has created worry among the Jewish community in Chile. “Boric has voted for every bill against Israel, called Israel a murderous state on public television, and consistently supports a boycott of Israel,” Gabriel Colodro, president of Comunidad Chilena de Israel, told Israel Hayom: “Boric has always been an outspoken critic of Israel and publicly condemned Israel’s theft of Palestinian lands. Two years ago, the Comunidad Judia en Chile, an Israel lobby group which states that its aim is to strengthen ties with Israel, presented him with a traditional Rosh Hashana gift of honey, but Boric responded by tweeting: “Comunidad Judia en Chile gave me honey to emphasize its commitment to a more accepting, supportive and respectful society.” His tweet continued: “I thank you for the step, but you can start by demanding that Israel return the Palestinian territory it occupies illegally.”