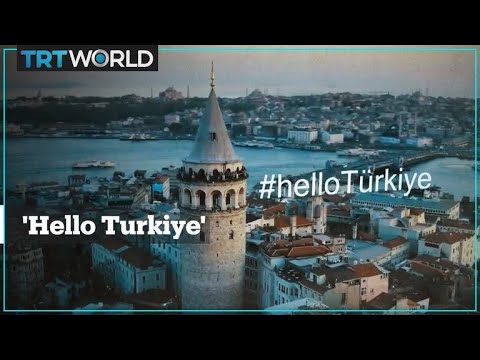 ( Globalvoices.org ) – Turkey’s Communications Directorate launched a new campaign #helloTürkiye on January 14, in an attempt to “raise global awareness about using the country’s original name.” In a statement issued by the Presidency’s Director of Communications, Fahrettin Altun said, “We believe that it is significant to use the phrase ‘Türkiye’ in the international arena in order to further strengthen our country’s brand and reputation.” The rebrand follows a presidential circular signed on December 4, 2021, requiring the use of “Türkiye” instead of “Turkey” in all correspondence with other states, international institutions, and organizations.

The phrase ‘Türkiye’ symbolises and conveys the Turkish nation’s culture, civilisation, and values in the best way possible. As part of this, the phrase ‘Made in Türkiye’ instead of ‘Made in Turkey’ began to be used in our export products; as a result, our products, which are the pride of our country in international trade, are promoted and presented to the rest of the world using the ‘Türkiye’ branding. Our aim is now to represent our state and nation’s thousands of years of experience in every sector under the ‘Türkiye’ brand.

While Altun and the President have emphasized that the rebranding would strengthen the country’s reputation, others joked that the campaign is meant to disassociate the country from a certain homonymous bird. “Type ‘Turkey’ into Google, and you will get a muddled set of images, articles, and dictionary definitions that conflate the country with Meleagris – otherwise known as the turkey, a large bird native to North America – which is famous for being served on Christmas menus or Thanksgiving dinners,” reported TRT World.

As the country grapples with soaring inflation, pundits say this is not the time for rebranding, nor there is any point in doing so.

Others criticize the government’s choice to use taxpayer money on this rebrand when there are countless other issues plaguing the community such as a recession, job loss, unchecked violence, gender discrimination, and an Omicron surge, among others.

Arzu Geybullayeva is an Azerbaijani columnist and writer, with special focus in digital authoritarianism and its implications on human rights and press freedom in Azerbaijan. Arzu has written for Al Jazeera, Eurasianet, Foreign Policy Democracy Lab, CODA, Open Democracy, Radio Free Europe, and CNN International. She is a regular contributor at IWPR, Osservatorio Balcani e Caucaso and Global Voices. In 2019, Arzu launched Azerbaijan Internet Watch, a platform that documents, and monitors information controls in Azerbaijan. Arzu has contributed to GV since May 2010