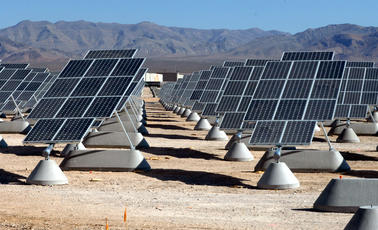 Ann Arbor (Informed Comment) – As part of a Biden Administration push to put in 27 gigawatts (GW) of renewable energy on federal land by 2025, the Interior Department’s Bureau of Land Management has just approved the third major solar farm in California, announcing that “the Bureau of Land Management has approved the Oberon Solar Project, which will generate up to 500 megawatts of renewable energy and have capacity for 200 megawatts of battery storage. The project will be built on approximately 2,600 acres of BLM-managed public lands near Desert Center in eastern Riverside County.” The Department intends ultimately to lease 100 GW for solar installations.

In December, the Department of the Interior, headed by Deb Haaland, a Pueblo American-Indian, had already approved the Arica and Victory Pass solar farms on public land in California. Taken all together, these three projects will generate 1 gigawatt of power, providing electricity to nearly 300,000 homes. These new facilities are among 40 major solar installations currently planned for public lands.

In the Northwest, Canadian First Nations tell the story of how at the beginning of time the Grey Eagle kept the sun and the moon hidden, hanging inside his lodge. Another figure, the Raven, stole them and hung them in the sky, freeing the light. Secretary Haaland is playing Raven here, rescuing the sun from the darkness of the fossil fuel lobbyists and freeing it to produce power and light for everyone.

One reason this push for solar leasing on federal land is so important is that sometimes communities push back on solar farms near their homes on private land. Federal lands are vast and often in wilderness, and can be leased without raising those community concerns. The projects can therefore be fast-tracked once approved. The Department of the Interior oversees over 245 million acres of public land, most of it located in 12 western states and Alaska.

The three new California solar farms are only the beginning. BLM Director Tracy Stone-Manning, the director of the Bureau of Land Management, said, “Investing in clean and reliable renewable energy represents the BLM’s commitment for addressing climate change and supports Congress’ direction in the Energy Act of 2020 to permit 25 gigawatts of solar, wind, and geothermal production on public lands no later than 2025.”

The US only has 100 gigawatts of solar power presently, so in just 3 years Secretary Haaland plans to add a fourth again as much. Only about 3% of solar installations are on public land, so these moves will increase them by a factor of 8.

BLM has also announced that “it is soliciting interest for utility-scale solar energy development on nearly 90,000 acres of public land located across Colorado, Nevada, and New Mexico.”

In another announcement, the Department of the Interior observed, “The BLM is currently processing 54 utility-scale onshore clean energy projects proposed on public lands in the western U.S. This includes 40 solar projects, 4 wind projects, 4 geothermal projects, and 6 interconnect gen-tie lines that are vital to clean energy projects proposed on non-federal land. The 54 projects have the combined potential to add over 27,500 megawatts of renewable energy to the western electric grid.”

Beyond 2025, the Department’s plans are even bigger, as Ryan Kennedy at PV Magazine writes. The Department plans to add another 100 gigawatts of solar power to the US grid on public lands, doubling the country’s electricity-generating capacity from this source,

There will be huge side effects of this federal leasing for solar. Swanson’s law states that with every doubling of the number of solar panels installed, the price falls 20 percent. The typical price of electricity in the US is about 13 cents per kilowatt hour. The over-all cost of solar is 6 to 8 cents a kilowatt hour (it is cheaper in very sunny places). But that means if the Department of the Interior does double US solar capacity in the coming decade, the price will fall to 4.8 to 6.2 cents a kilowatt hour. That estimate does not take into account all the new solar that will be put in on private land, which will also drive prices down. This technology is going to get so cheap that it will be impossible for fossil fuels to compete and the latter will all shut down. That day is not far off, and is much nearer than most people realize.

The Raven has released the sun from the Grey Eagle’s lodge.